Cao’s works took the Hamptons, New York, by storm last June at the Art Fair and aim to do it again this year. No surprise for an artist who has already exhibited in The Heckscher Museum of Art, New York, Art Basel and Scope Miami. Large-scale portraits of American icons such as JFK and Jackie Kennedy are deftly comprised of smaller images which Cao selectively arranges in subtle monotone shades. These juxtapositions create compelling acts of visual conversation resonating the Instagram flow of images.

By incorporating two subjects into one cascading mosaic, viewers are invited to construct a dialogue around the iconic imagery which Cao composes. Whether it is a larger than life portrait of Brigitte Bardot compiled of minuscule Jane Birkin portraits or a series of miniature Andy Warhol images making a giant Triple Elvis, Cao thoughtfully composes a dialogue between subject matter and aesthetic. This exploration of American pop legends in intimate scale, shifting simultaneously both micro and grand, invites viewers to thoughtfully consider the relationships between Hollywood icons and political heavyweights, songwriting sirens and art aficionados. 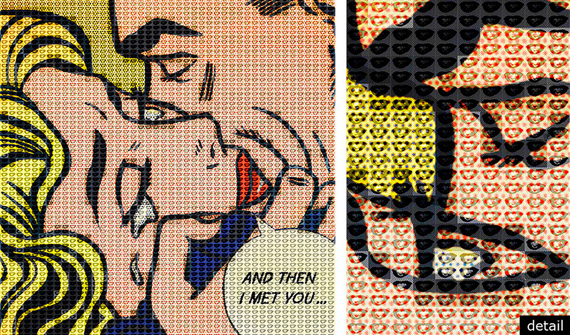 Cao has artfully created images that resonate because of their subtle shifts in shadow. Some artworks do incorporate colour, yet for the most part Cao embraces the endless variations of black and white that compose the majority of his artworks. His mosaics intricately span a delicate palette of grays, hearkening back to the golden era of black and white portraiture while combining this atmosphere with a penchant for Pop art themes. This serves to add classic modern glamour to augment his already appealing subject matter, making his subjects larger than life. Cao elevates his creations through this monotone treatment: the colour is superseded by the use of subtle shading. The harmonious gradients take into account the spatial interplay of the mini image, balancing the visual weight of this miniature portrait with that of the resulting large-scale portrait. Cao also considers the intertwining story lines of the lives of the juxtaposed imagery: the range of layered narratives inform the overall effect of the composition in a mesmerizing manner.

An enlightening example of Cao’s practice is found in his artwork A Thousand Kisses Deep, an overarching homage to Lichtenstein’s Kiss created with a mosaic of repeating images of Marilyn Monroe’s lips, as portrayed by Andy Warhol. Warhol and Lichtenstein, aside from being two major masters of American pop art, often vied for attention and prestige in the glamour of the New York art world of the 1960s. Cao makes apparent the complexity of this relationship, revealing how intertwined the lives of these two American pop art icons actually were. His remarkable layering of both the subject matter itself–the kiss and its instrument, the lips–with the alternating storyline of the artists behind the artworks is only a fraction of the fascinating detail Cao imbues his mosaics with. 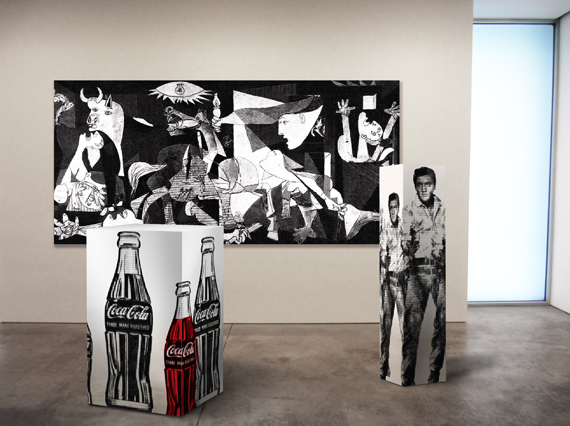 Cao’s works are visionary, yet his roots ancient. Although it seems that in medium and method Cao is strictly contemporary, his eyes were first drawn to the mosaics of Pompeii as inspiration. The ornate arrangements of materials creating monumental compositions inspires his form and concept. Cao has captured a timelessness that looks always with an eye to beauty: the beauty of youth and pleasure with an equally apparent gaze toward of the ephemerality of life and the splendor of freedom and democracy. Beauty to Cao is a gloriously multitudinous form, and his process reflects (literally, in some cases) the captivation of modern beauty and its eternal hold on a discerning public.

Cao remains alert to the myriad of histories from the reigning era of Twentieth century American pop culture while elevating these complex threads into a sublime tapestry. He instigates examination and inspires an appreciation of the beauty of pop art imagery, divulged alongside thoughtful subject matter. His artistic mosaics spark conversations with legends of American pop history. These ongoing conversations, these visual dialogues continue to inspire as Cao continues to artfully capture American icons, finding beauty in both the shine and the shadow. 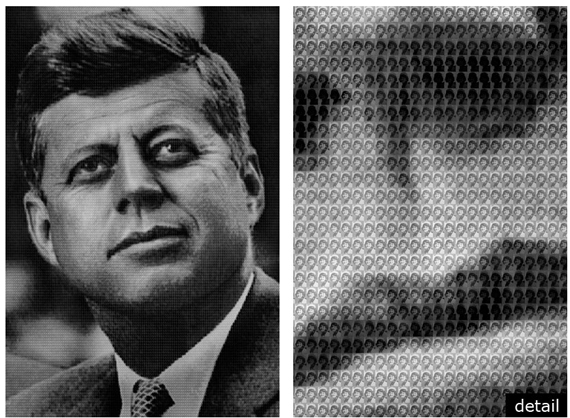 JFK vs Jackie by Alex G Cao. Courtesy the artist.