When walking into an exhibition about Sandro Botticelli one of the last things you would expect to encounter is a clip from Dr. No. However, this is exactly what happens at Botticelli Reimagined at the V&A. The excerpt shown is the famous scene where Ursula Andress emerges from the sea clutching seashells. This moment in film history, which itself was homaged in Casino Royale where Daniel Craig flips bond tradition and does his version, demonstrates how the visual language of Botticelli has transcended painting and spread 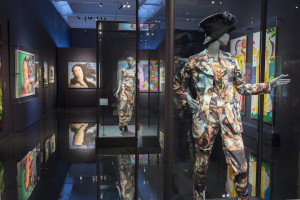 The exhibition at the V&A aims to demonstrate how the work of Botticelli has been recognized in his lifetime and beyond. Through organising the show into three sections, the curatorial team have ensured that the work is in chronological order, tracing Botticelli’s influence back till it culminates in his own work. However there are always downsides to the chronological method of curation, within this exhibition I would have loved to see Botticelli’s work, the Pre-Raphaelites and the contemporary mixed together. The journey of unpacking the layers of influence until the climax of Botticelli’s work is interesting to a degree. However, I would have loved the combination of Andy Warhol, Dr. No and an original Botticelli in one space. This would have allowed other visual dialogues to come forward, other than comparing the use of a statuesque female figure.

Within the first section there are examples of Botticelli within photography, painting, video art and fashion. The works of cinema and video art form a dynamic soundtrack interrupting and interacting with the other artworks. There are also soundtracks in the other two rooms, but they feel far more forced, especially the piece of classical music, which accompanies the Pre-Raphaelite section. Here, the adage of less is more is definitely true. 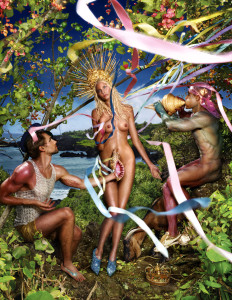 Botticelli’s works, obviously, are a joy, and the V&A’s method of display really enables you to get up close to the paintings. What becomes clear here through this is the difference between his religious works and his ‘Venus’ paintings, which now appear starkly secular in comparison. Whereas the religious figures, often the Virgin Mary are shown up close and often featuring a landscape in the distance. The focus with ‘Venus’ is purely on their glowing forms. When finishing the exhibition and viewing these luminescent secular figures, it’s easy to see why his work has been appropriated all over the world.

Botticelli Reimagined is at the V&A until 3rd July