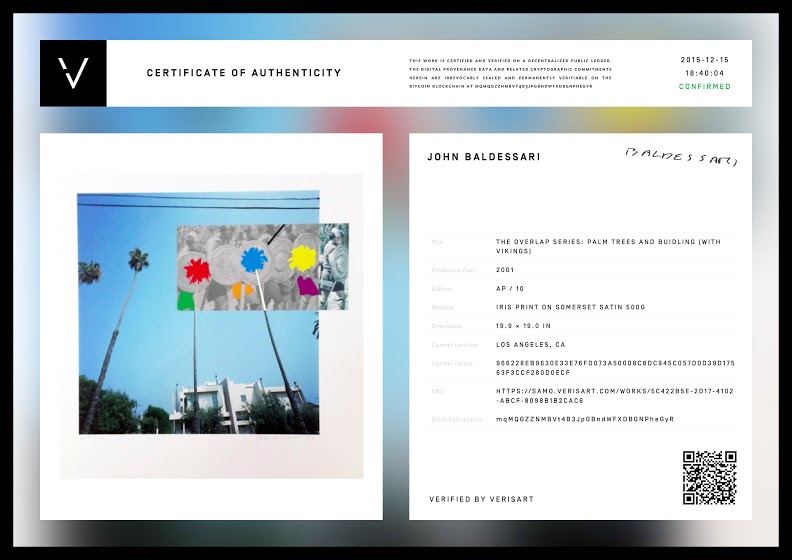 Verisart, the first ever platform for certifying and verifying physical artworks and collectibles on the world’s most secure, decentralized register.

By using distributed ledger technology provided by the blockchain, Verisart aims to build a permanent, decentralized and anonymous ledger for the world’s art and collectables. Verisart joins a rising number of companies offering new services made possible by blockchain technology.

“It’s time for artists and collectors to take control of their records and Verisart provides a free and easy way to generate certificates that new standards in security and longevity.”

Verisart is currently by invitation only FAD has been given a limited number of VIP invites just send us an email to mark@FADemail.com if you would like one.

About
Verisart is founded by Robert Norton (CEO), former CEO of Sedition Art and Saatchi Online and Managing Director of King.com North America. Adam Dinwiddie has been appointed CTO from Paddle 8 where he was Head of Product Design and formerly CTO
of Collectrium. The company’s headquarters are in Los Angeles and consists of a rapidly
growing team of developers and designers. Peter Todd, core developer for the Bitcoin
blockchain protocol is a Board Adviser and brings deep expertise in designing blockchain application architectures.

CALL OUT: The ICONIC Digital Biennale