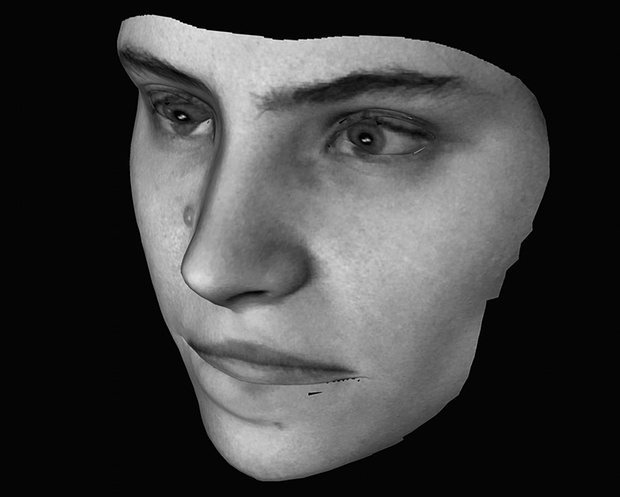 This article titled “Negative humanity: the birth of the digital death mask” was written by Sean O’Hagan, for theguardian.com on Friday 5th February 2016 14.21 UTC

In the 1870s, Cesare Lombroso, an Italian criminologist, conceived the theory of criminal atavism – the belief that lawbreakers were born, not made, and could be distinguished from law-abiding citizens by various physical anomalies such as sloping foreheads, big ears and protruding jaws. To this end, he compiled and published L’Uomo Delinquente (The Criminal Man) in 1878, a catalogue of the faces and facial measurements of 383 convicted criminals.

Related: Laura Poitras: using art to illuminate a world that would rather remain unseen

The following year, the French criminologist Alphonse Bertillon developed an anthropometric system of criminal identification also based on detailed facial measurements. Whereas Lombroso believed that his catalogue could prevent crime by helping the police identify criminal types in advance, Bertillon’s system became the basis for a vast archive of criminal records held by the Paris police that included fingerprints and anatomical measurements as well as the full-face and profile photographs now commonly known as police mugshots.

These cataloguing systems were based on two popular contemporary pseudosciences: physiognomy (the assessment of a person’s character from their features) and phrenology (the assessment of a person’s character from measurements of their skull). Both also relied on the relatively new medium of photography. Since its earliest days, the camera has been deployed by the state to identify and keep records of its citizens. The accumulation and classification of vast amounts of often mundane material garnered from surveillance of ordinary individuals is one of the defining aspects of the totalitarian state – as evinced by the East German Stasi archives and Stalin’s insistence that those he ordered to be killed in the great purge had to be photographed first.

Images produced by surveillance drones have been used by artists including Omar Fast, Trevor Paglin and James Bridle. And as Adam Broomberg and Oliver Chanarin’s intriguing new book shows, the state has been keeping abreast of new developments in surveillance technology. The portraits in Spirit Is a Bone were produced, not by a camera, but a machine: a facial recognition system recently developed by software engineers in Moscow for public security and border control surveillance.

Related: Eyes in the sky: why drones should not be banned

“The aim is to take shots of people passing through places like border crossings, railway stations, sports halls, even cinemas,” the duo told the Guardian while still working on the project. “It is eerie and sinister: it captures the shape of a face in a split second, from multiple angles, using various lenses. It then constructs a 3D model of the head that can be closely analysed and stored for future reference.”

The process is now being introduced as a method of surveillance in cities around the world. The implications for increased state surveillance are obvious, not just at border controls, but as a means of monitoring public protests or gatherings.

Broomberg and Chanarin are politically driven conceptual artists and their work tends towards the elaborately ambitious. In 2013, they won the Deutsche Borse Photography prize for War Primer 2, a book that reworked Bertolt Brecht’s original War Primer using text and found images to illustrate the role of photography in the “war on terror”. They have since reworked the Bible in a similar way to draw a parallel between its “divine violence” and the violence of the modern state.

“What first sparked our interest in speaking with these engineers,” they write in the afterword to Spirit Is a Bone, “was the technical challenge they faced in producing what they call ‘non-collaborative portraits’ – where the subject is neither consensual nor necessarily aware of the camera.” Those non-collaborative portraits now comprise a fast-growing digital archive of mass surveillance.

If digital recognition technology echoes the Victorian criminologists’ impulse to catalogue and classify potential criminals, it is also a response to our collective fears and anxieties regarding threats to our security from lone hackers or organised terrorists cells. Broomberg and Chanarin’s portraits were made using advanced facial recognition technology in Moscow and with the consent of each of their 120 subjects. Among them was Yekaterina Samutsevich of Pussy Riot, who is classified as The Fighter or Revolutionary.

Other classifications include Demonstrator, Judge, Country Girl and Painter – all rendered unreal, but instantly recognisable, by the process. Broomberg and Chanarin’s taxonomical approach also nods to another more epic visual-anthropological endeavour: August Sander’s attempt to classify the citizens of Weimar Germany by type – the Banker, the Baker, the Artist, the Vagrant, the Revolutionary, and even the Dead, which he filed under “Matter”. In that last category, Sander included the death mask of his own son, Erich Sander.

There is something altogether deathly, too, in the portraits in Spirit Is a Bone. In their afterword, Broomberg and Chanarin write of advanced digital recognition: “There is never a moment in the capturing of the ‘image’ when human contact is registered; the subject’s gaze, or any connection between photographer and sitter that we would ordinarily rely on in looking at a portrait, is a complete fiction in this space. What we’re seeing is the negation of that humanity: the digital equivalent of the death mask.”

• Spirit Is a Bone by Broomberg and Chanerin is published by MACK.