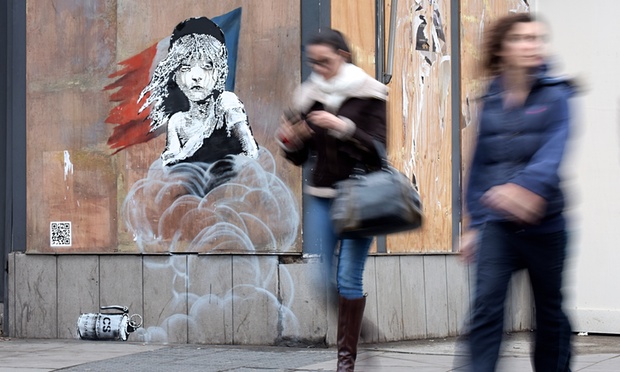 The mural depicts a young girl from Les Misérables with tears in her eyes as gas billows towards her. Photograph: Christian Sinibaldi for the Guardian

This article titled “Banksy’s new artwork criticises use of teargas in Calais refugee camp” was written by Hannah Ellis-Petersen, for The Guardian on Sunday 24th January 2016 18.21 UTC

A new artwork by Banksy criticising the use of teargas in the “Jungle” refugee camp in Calais has appeared on the French embassy in London.

The artwork, which depicts a young girl from the film and musical Les Misérables with tears in her eyes as CS gas billows towards her, appeared overnight on Saturday.

In a first for the elusive graffiti artist, the artwork is interactive and includes a stencilled QR code beneath. If viewers hold their phone over the code, it links them to an online video of a police raid on the camps on 5 January.

The work is the latest in a series of pieces by the graffiti artist criticising Europe’s handling of the ongoing refugee crisis. It is a direct comment on the recent attempts by French authorities to bulldoze part of the camp in Calais – which has now been deemed unsafe – and evict about 1,500 refugees.

Speaking to the Guardian last week, a police spokesperson, Steve Barbet, denied that teargas was being used to clear the camps. “It’s not in our interest to use teargas unless it’s absolutely necessary to restore public order, and it is never used in the camp itself,” he said.

But the seven-minute clip posted on YouTube clearly shows teargas, rubber bullets and concussion grenades being used by the French authorities in an overnight raid in early January. Videos and reports of the repeated use of CS gas also emerged last Monday as French police attempted to create a 100-metre buffer zone between the camps and the motorway.

In January, a Banksy mural depicting the Apple founder Steve Jobs, who was the son of Syrian migrants, appeared on the wall of a tunnel in the refugee camp in Calais. In a short statement accompanying the work, Banksy emphasised that Apple, one of the most profitable companies in the world, only existed because “they allowed in a young man from Homs”.

Related: Clearing of the Calais ‘Jungle’ – in pictures

The Steve Jobs artwork was placed behind a protective glass plate by local authorities but last week vandals tore it down and defaced the graffiti. Earlier reports said one migrant had set up a tent beside the artwork and was charging five euros to view it.

Other politically-motivated artworks by Banksy that have appeared in Calais include a stencil by the beach, portraying a child looking towards Britain while a vulture sits atop their telescope.

Next to the town’s immigration office, Banksy also reproduced a version of ‘The Raft of the Medusa’, a painting of shipwreck survivors by 19th-century French painter Théodore Géricault. In Banksy’s re-imagining of the work, survivors on a raft desperately wave to catch the attention of an ostentatious modern yacht on the horizon.

As part of Dismaland, his temporary “bemusement” theme park in Weston-Super-Mare over the summer, Banksy built an installation that featured boats filled with the bodies of drowned refugees. On the closing night of Dismaland, Russian activist group Pussy Riot also debuted their specially-written song ‘Refugee’, which was a rallying cry for the leaders of Europe to step up their assistance to people fleeing war-torn countries.

Related: In Dismaland, Banksy has created something truly depressing

Since Dismaland closed in September, the artist has been shipping its leftover infrastructure to help build emergency housing for the 7,000 migrants – who are mainly from Syria, Eritrea and Afghanistan – now living on the site of a former rubbish tip in Calais.

According to the Dismaland website, the materials have already been used in 12 dwellings, a community area and a children’s play park.

In 2005, Banksy travelled to Israel’s West Bank barrier and decorated the Palestinian side of the concrete wall with nine satirical artworks. He also travelled to New Orleans after Hurricane Katrina and painted a dozen works on buildings left derelict after the disaster, including one that depicted Abraham Lincoln as a homeless man.