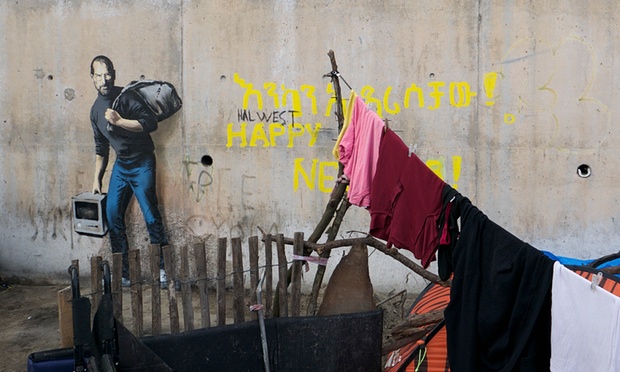 Banksy said Apple only existed because the US allowed in ‘a young man from Homs’ – the father of Steve Jobs. Photograph: banksy.co.uk

Banksy has revealed a new artwork, sprayed on a wall in the Calais refugee camp called “the Jungle”, intended to address negative attitudes towards the thousands of people living there.

The work depicts the late Steve Jobs, the founder of Apple, with a black bin bag thrown over one shoulder and an original Apple computer in his hand. The work is a pointed reference to Jobs’s background as the son of a Syrian migrant who went to America after the second world war.

In a rare statement accompanying the work, Banksy said: “We’re often led to believe migration is a drain on the country’s resources but Steve Jobs was the son of a Syrian migrant. Apple is the world’s most profitable company, it pays over $7bn (£4.6bn) a year in taxes – and it only exists because they allowed in a young man from Homs.”

The graffiti is one of a series of works Banksy has created in response to the refugee crisis. During his trip to Calais, the artist covered several walls across the French port with related graffiti, including a riff on Theodore Gericault’s Raft of the Medusa, featuring a luxury yacht.

This summer, his temporary “bemusement” park in Weston-Super-Mare featured an installation of boats filled with bodies. On the closing night of Dismaland, Banksy also invited Pussy Riot to debut their song criticising the global failure to help the migrants entering Europe.

Since the park closed in September, the artist has been shipping leftover infrastructure from Dismaland to help build emergency housing for the 7,000 migrants, mainly from Syria, Eritrea and Afghanistan, now living on the site of a former rubbish tip in Calais.

The “Dismal aid” project has seen site crew from the theme park build accommodation, community buildings and a children’s play area in the camp.