A new survey on the style of selfies has revealed that London selfie-takers are the least happy and some of the oldest in the world. Commissioned by Somerset House for its major exhibition Big Bang Data, the new selfiecity London project explores the modern phenomenon of self- portrait photographs (or selfies) in the English capital and compares them to five cities around the world (Bangkok, Berlin, Moscow, New York and São Paulo). It is the first time that this uncanny collective portrait of London has been created.
A team of media researchers, information designers and data scientists collected all public Instagram images during one week in September 2015 tagged with a location in a 5 x 5 km area around Somerset House. In total, this specific collection provided 152,462 images, of which at least 21,662 featured faces (determined by manual verification after automatic analysis). The team then annotated a subset of 640 selfies in detail. For these images, an in-depth investigation was undertaken to find out factors such as emotional expression and physical poses, as well as gender and age estimates. 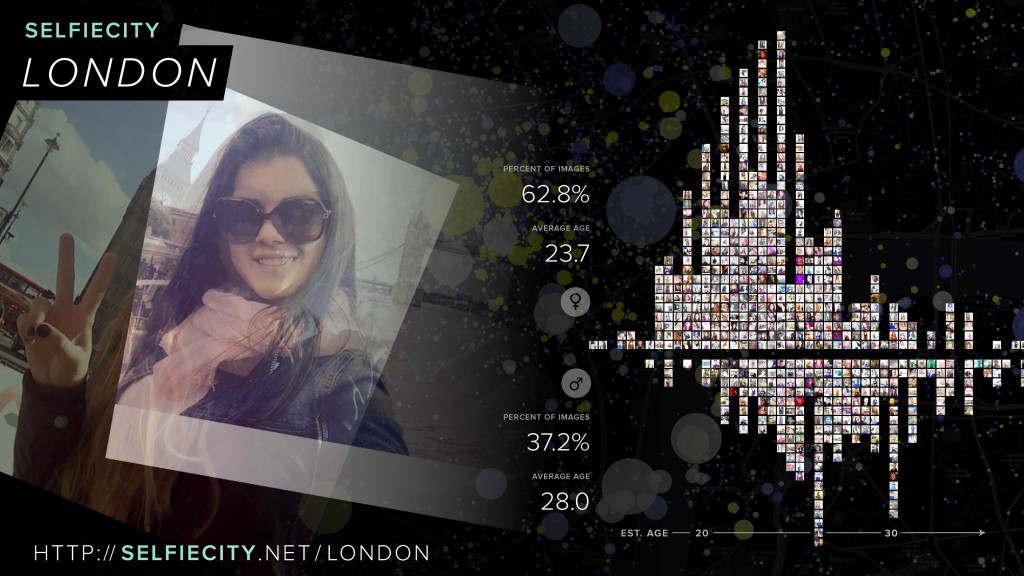 selfiecity London is one of the works being shown in Big Bang Data, opening on 3 December at Somerset House in London. The London edition of the project was commissioned by Somerset House following the publication of the original selfiecity last year, which did not include the English capital. Big Bang Data examines the effects of the explosion of data generated by the public’s online activity, such as selfies shared on social media. The fascinating insights into how people in the six studied cities represent themselves will be displayed in digital visualisations, which feature interactive “selfiexploratory” software to discover popular poses and selfie trends.

Dr. Lev Manovich, Professor at The Graduate Center, City University of New York and one of the co-creators of selfiecity, commented on the results:

“Considering that young Londoners face challenges such as rising property prices and highly competitive job markets, the fact that Londoners are a little older and not always jumping for joy is perhaps not so surprising. Yet these are also issues felt in other cities around the world, so it’s interesting to see that Londoners are more honest and they’re not painting an alternate perfect picture on social media, which can often be the case.”