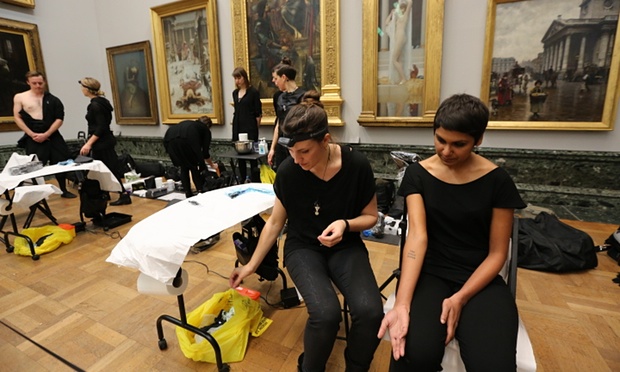 Climate change activists have occupied part of Tate Britain, where they have started to tattoo each other in protest at BP’s sponsorship of the gallery.

Tate has closed the 1840s gallery where 35 activists have set themselves up and started to tattoo each other with the numbers of the CO2 concentrations in the atmosphere in the year they were born. They estimate it will take all day to complete the tattoos.

Alice Bell, a spokesperson for Liberate Tate, the group that is leading the protest, said: “This makes a statement about the stain that oil has across society, on Tate, on the negotiations and across our culture, society and economics more broadly. The black mark on our skin reflects the taint of BP on Tate.”

Scientists estimate that 350 parts per million of carbon dioxide in the atmosphere is a safe level. This was passed around 30 years ago.

UN experts said recently that the Earth’s atmosphere would “enter a new permanent reality” in 2016 when the CO2 concentration is predicted to pass 400ppm. It is currently estimated to stand at 397ppm. UN climate change talks open in Paris on Monday.

Amy, 38, a photographer from Australia, was having the number 333 tattooed on her hip, where her daughter has a birthmark. “I’ve never had a tattoo because I’ve never felt strongly enough about a symbol or image to have it permanently placed on my body. But I have a daughter and I am deeply concerned about climate change,” she said. “To have a child is a hopeful act, it is to have faith in the future. But we have to divest fossil fuels from our lives and that includes the arts.”

The four activists doing the tattooing are not professionals and have spent two months learning the process, practising on fruit and their own legs. Bell said their protest was “probably more hygienic than most tattoo parlours”.

It is the latest in a string of protests by Liberate Tate that aim to highlight the influence of BP on art and cultural institutions. In June the group occupied Tate Modern’s Turbine Hall for 25 hours and scrawled words of warning about climate change across the floor in charcoal. Three years earlier they deposited a wind turbine blade at the gallery, with an official request for it to be made part of the museum’s permanent collection.

In January, after a protracted legal battle, the Tate was forced to reveal that it had accepted £3.8m from BP over a 17-year period – an average of £224,000 each year. Protesters said the sum was “embarrassingly small”, while the Tate described it as “considerable”. A freedom of information request revealed that the sponsorship represented 0.3% of Tate’s operating budget in 2013-14.

The 1840s gallery was chosen for the protest because it houses many paintings from the time of the industrial revolution, when the large-scale burning of fossil fuels began in the west. Tate Britain is the oldest gallery in the Tate network, which dates back to the late 19th century when the industrialist Henry Tate donated his art collection to the nation.

In Paris on Monday, leaders from almost every country in the world will gather to try to thrash out a deal on limiting greenhouse gas emissions from 2020. More than 2,000 protests in 150 countries are expected to take place on Sunday as part of the Global Climate March.

Tate responded to the protest in a statement that read: “BP is one of the most important sponsors of the arts in the UK supporting Tate as well as several other leading cultural institutions. Tate works with a wide range of corporate organisations and generates the majority of its funding from earned income and private sources. The support that these organisations give is extremely important and allows us to deliver a hugely successful and popular programme.

“The Tate Trustees first agreed a sponsorship policy in 1991, and more recently incorporated its principles within an Ethics Policy in 2008. The Board and Ethics committee regularly review compliance with the policy. BP has worked with Tate since 1990 and fits within the guidelines of this policy. Its support has been instrumental in helping Tate develop access to the Tate Collection and to present changing displays of work by a wide range of artists in the national collection of British art.” 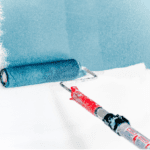