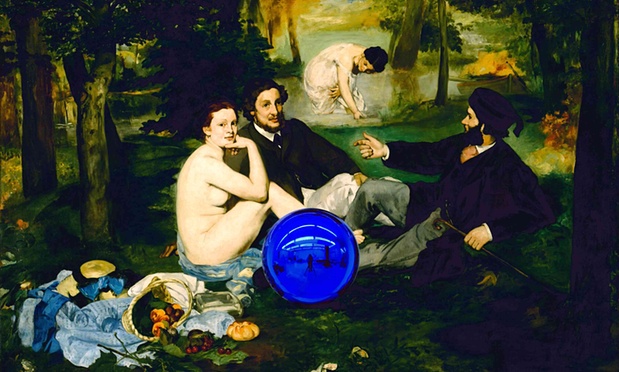 Gaze a gazely stare: a detail from Gazing Ball (Manet Luncheon on the Grass) by Jeff Koons. Photograph: Gagosian gallery/Supplied

This article titled “Jeff Koons on his Gazing Ball Paintings: ‘It’s not about copying'” was written by Alex Needham, for theguardian.com on Monday 9th November 2015 21.41 UTC

Standing in front of the Mona Lisa – only this version was around three times the size of the original and had a blue sphere on a shelf that jutted out from the painting – the artist Jeff Koons noted that he wasn’t the first artist to reinterpret Leonardo da Vinci’s masterpiece.

Marcel Duchamp and Andy Warhol had also appropriated the painting, he pointed out – Duchamp by drawing a moustache on a reproduction of the image for his famous 1919 work LHOOQ.

Koons has gone further, however. In his new show at the Gagosian gallery in New York, the artist has taken 35 masterpieces, including Manet’s Déjeuner sur l’Herbe, Géricault’s Raft of the Medusa and Rembrandt’s Self-Portrait Wearing a Hat, had them repainted in oil on canvas, and added a little shelf, painted as if it had sprouted directly from the image.

On each of these shelves, Koons has placed a large, blue glass bauble, or “gazing ball”, popularised by King Ludwig II of Bavaria and now more often used as garden ornaments. These baubles were specially hand-blown in Pennsylvania – Koons commissioned 350 and picked the best 35. “Each one’s unique,” he says.

Though they appear to be perfectly balanced, the globes are attached to the shelves with a rod reaching into the hollow bauble. “I engineered this and I feel really good about it, because all these things are somewhat an engineering feat,” said Koons.

Koons is famous for turning kitsch ephemera like balloon dogs and imagery from drinks adverts into art. His retrospective at Paris’s Pompidou Centre was the most successful in the museum’s history, with more than 650,000 visitors. In 2013, a 10ft version of one of his steel “balloon dog” sculptures sold for $58m (£37m), the most expensive work by a living artist ever to sell at auction.

He has exhibited the gazing balls before, in 2013, only they were previously balanced on white sculptures – again, mainly appropriated from art history. One also features on the cover of Lady Gaga’s 2013 album ArtPop, in a work commissioned by the singer.

Presenting his new show to the media on Monday morning, Koons said that the gazing ball “represents the vastness of the universe and at the same time the intimacy of right here, right now”.

Looking at the Gazing Ball Paintings, all credited to Koons and called, for instance, Gazing Ball (El Greco Vision of Saint John), the viewer sees him- or herself reflected in the perfectly shiny surface as well as the famous image. “This experience is about you,” says Koons, “your desires, your interests, your participation, your relationship with this image.”

Koons said that the images he’d used – some of the most famous in art history – were not intended to represent the canon but instead were “works that I enjoy … my cultural DNA”. He pointed out that many of the artists referred to in the show had influenced one another – “Monet is always referencing Rubens … Manet is referencing Raphael … everybody enjoyed Titian.”

The show, he added, is “not about being a copy, this is about this union, the concept of participating” – the act of looking and the relationship between the pictures. “Everybody’s in this dialogue of sharing enjoyment and pleasure.”

“These paintings in their own time were some of the greatest masterpieces in western art history, but in this time, this moment, they’re most powerful as they are in this state of gazing.”

Koons said he believed that art had changed him fundamentally. “I’m a different human being since I saw Manet’s work, my genes have changed and it’s a fact that through ideas you can morph your genes. Eric Kandel, the Nobel prize-winning neuroscientist, told me that they do morph and change. Now, whether you can pass that on, that’s another story – I believe you can. You can become who you would like to be, you can connect with a history and realise the depth of meaning of humanity, and you can also change your future and put yourself firmly into the future through human connections.”

Koons said that the gazing balls are “devices of connecting. I want to participate, I always just wanted to be involved in a dialogue with the avant garde. This is my family, these are the artists that I have interest in, the joy that has enriched my life.” The artist concluded: “I enjoy participating in the dialogue and I want to bring something to the table.”