THE AGE I DON’T REMEMBER – TEASER from ZZZZZ on Vimeo.

As performance becomes increasingly established as a mainstream discipline, within contemporary art, questions pertaining to it’s marketability multiply. A practice that is usually ephemeral, by nature, has increased in popularity and in turn so has the need for galleries and dealers to document, own and market the work, in a physical form.

The possibility of the artist creating work so troublesome to sell that there becomes a degree of expelling any ideas or drive to accumulate currency from the work, consecutively inseminating a whole new level of purity and integrity that is perhaps lacking in a vast amount of contemporary art.  As the creation of, and audience for, performance art increases so does the importance of sustaining this honesty.

EMDASH is a philanthropic foundation endeavoring to bring performance and interdisciplinary practices that fall within the the less marketable areas of contemporary art, to a wider audience. Since setting up the EMDASH Award in 2011 they have helped nurture, showcase and establish young artists and fund an array of projects without the premise of financial gain. Their latest project, in partnership with the ICA, is a one off site-specific performance by artist Nástio Mosquito. 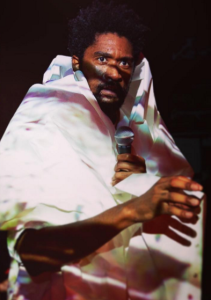 Nástio Mosquito is quickly becoming one of the most hotly tipped, young stars of contemporary art.  His practice traverses video and music, performance and installation and he’s managed to garner a huge amount of attention as well as  being nominated for and winning awards and exhibiting his work internationally.

Originally from Angola, Mosquito’s cryptically, philosophical angle on art explores the human condition, at a base level, in an attempt to coax acute reactions and emotion from his audience. His performances blur lines between genres in an intense burst of conscious dialogue, movement and music which intend to push the boundaries of thought, taste and opinion in a sometimes politically incorrect environment.

‘The Age I Don’t Remember’ Was a performance contained in an ambitiously large and intimidatingly dark space. Curious revelers filled the room instantly, to energetic bursts of drumming – the whole room fixated on a slim, handsome, black man, elevated on a box, head to toe in white, clutching a machete and a blood stained towel. A pensive energy exuded from Mosquito as he jumped down into the crowd to confront the audience dead on. He began to jovially traverse the the terrain of people and platforms, containing different band members, occasionally breaking into song or philosophising with the crowd, while videos where projected over his face and body like a contorting mask. His playful intention is to refresh and inspire while at the same time there is a starkly juxtaposed darkness to what he is relaying. His energy and enthusiasm instantly united the crowd in to a heady euphoric state as whisky and bananas where handed out to toast his celebration of energy. His clever rants seemed to mesmerise and elate the crowd with a sort of Pied Piper-esque charisma while he strived to involve them and hold their thought. 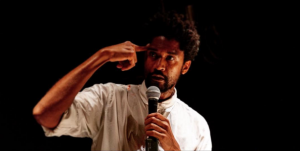 Mosquito emanates confidence and and there is a humble beauty to what he has to say delivered with a humorous lack of giving a fuck. It seemed effortless for him to shepherd the audience into the palm of his hand but with an obvious need for their validation, attention and praise.

Since Graduating from Camberwell College of Art, in 2006, Eric Thorp has worked forcontemporary art galleries, creative studios and on exhibitions in London and New York.Since 2010 Eric has worked as a freelance journalist contributing to various magazinesand websites including Clash and Leisure. 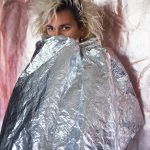 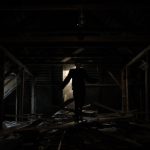 Seulgi Kang’s works deal with breaking down the simplicity and complexity of the ‘every day’. It communicates an understanding of a transitory feeling that she has experienced throughout her life as an artist, woman, and stranger in her surrounding reality. She is questioning her environment, balance and power relations, the rules that for her seem to have already been granted by default.