Your chance to see Damien Hirst's Shark in a Tank again. - FAD Magazine
Skip to content

“After the fascinating experience of working with Damien Hirst for our exhibition Self, in October 2014, I approached Damien again to see if he would consider another collaboration to coincide with Frieze this year” says Pilar Ordovas. “We embarked on a series of conversations, from which Damien conceived the idea of an exhibition, curated by Ordovas gallery, on the theme of the sea. The Big Blue is the result of this new collaboration: in it we explore some of the ways in which the sea influences art, by looking at works that span many centuries from Roman times until today. Our intention is to offer an original and penetrating glimpse into a universal theme.” 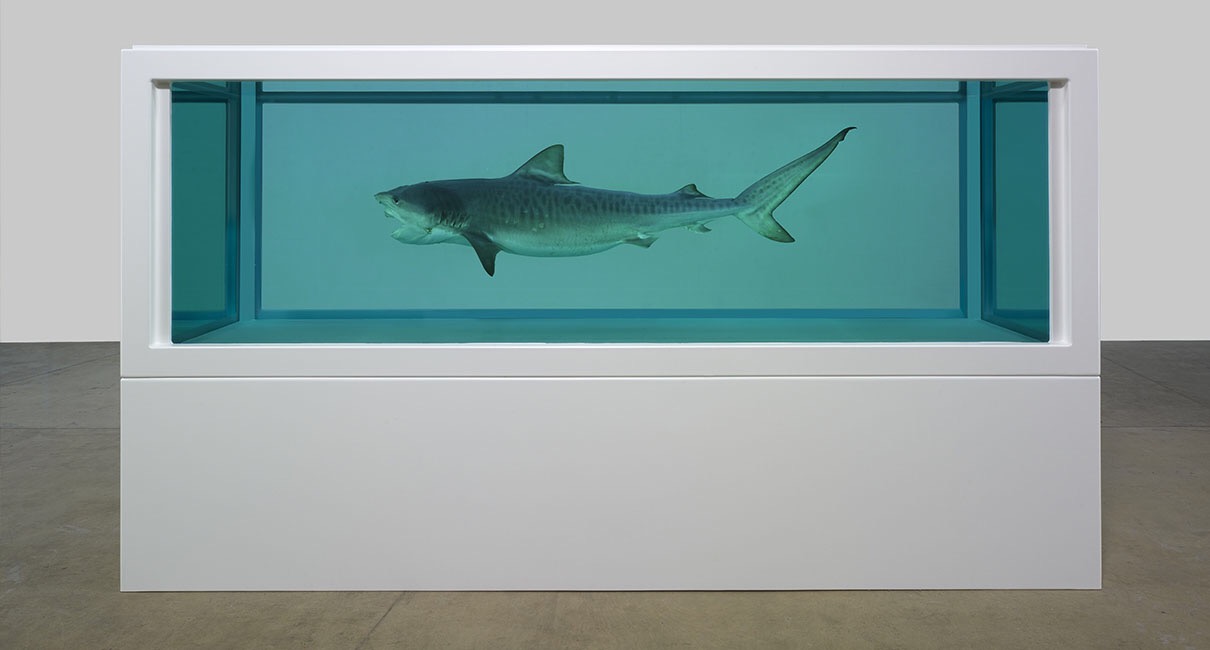 Francis Bacon’s elegiac ‘Figure in Sea’, thought to have been painted circa 1957 and one of only two surviving ‘seascapes’ by the artist, was the starting point for the selection process. Unrecorded at the time it was made, it remained unknown to the art world until it was found after Bacon’s death in 1997. The sketchily notated structure in the sea suggests that Bacon was intending to paint something more here although its sombre presence serves to heighten the mystery of this tenebrous masterpiece.

A fragment of a Roman sarcophagus, with its beautifully carved Nereid and Tritons in a marble Aegean Sea is the oldest of the works included in the exhibition, and is dated to the second half of the second century A.D. Linked by its marine imagery is a Baroque painting by Giacinto Gimignani, The Triumph of Galatea, c. 1640, replete with Nereids and a sturdy Triton. Painted by Gimignani’s Dutch contemporary, Jan Olis, Still-Life with Crab and Smoker’s requisites, is also dated circa 1640.

Francis Bacon greatly admired Gustave Courbet, and the seascapes of Courbet, Renoir and Monet are thought to have informed ‘Figure in Sea’. Paysage de mer, painted by Courbet in Normandy in 1869, with its vigorous application of paint and urgent, thickened brushstrokes is in ideal symbiosis with the depopulated sea and turbulent cloudscape he powerfully evokes.

In contrast, Hiroshi Sugimoto’s seascapes, a continuing project begun in 1980, are masterpieces of cool understatement and timeless, elemental intensity, as North Pacific Ocean, Ohkurosaki, 2002, lucidly demonstrates.The exhibition features two seascapes by Max Ernst, Gulfstream and Horizon, both executed in 1926, and two seashore nudes by Pablo Picasso, Baigneur et baigneuses, 1920-21, and Les trois baigneuses, 1932, painted at the Château de Boisgeloup, which Picasso had bought in 1930. Mondrian’s exposure to Picasso and Braque’s cubism in Paris in 1911–12 revolutionised his conception of space. Confined to the Netherlands during World War I, he continued his search for the essence of beauty, abstracting from nature the fundamental rhythms of horizontal and vertical lines. To view the ‘Pier and Ocean’ series, in which the verticals of the pier are in a dynamic dialogue with the pulse of the waves, is in effect to follow the chronology of Mondrian’s journey into pure abstraction; Pier and Ocean 3, 1914, is intoxicatingly poised at a crucial moment in this transition, immediately preceding the elimination of diagonals in his quest for equilibrium. 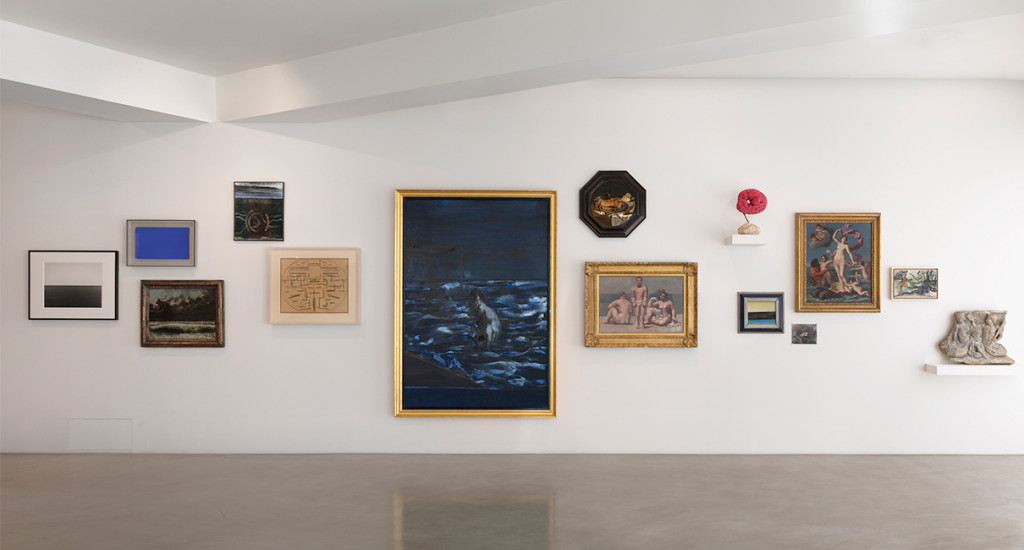 Painted the same year as Bacon’s ‘Figure in Sea’, Yves Klein’s IKB 127, is not any blue but specifi- cally ultramarine; the inclusion of Klein’s Sculpture éponge rose, 1959, is a reminder that blue was not Klein’s only signature colour. Felix Gonzalez-Torres’s diminutive “Untitled” (Ross Scuba Diving), 1991, is, like his candy pieces, an invitation for audience participation in un-building and rebuild- ing – a jigsaw with the potential to be constructed, taken apart, and reconstructed, a continuing process analogous with the repetitiveness and inevitability of waves.

The Big Blue is completed by, and turns full-circle with, Heaven, a shark preserved in a tank of formaldehyde that follows Hirst’s iconic 1991 piece, The Physical Impossibility of Death in the Mind of Someone Living; the sharks have a special frisson, their sleek, forward motion elegantly sus- pended in death in blue formaldehyde seas. In March 1992 the first shark was included in the first Saatchi Gallery exhibition of the YBAs.

Big Blue, on display at Ordovas through to 12th December, is an exhibition of work inspired by the sea, spanning almost two millennia. 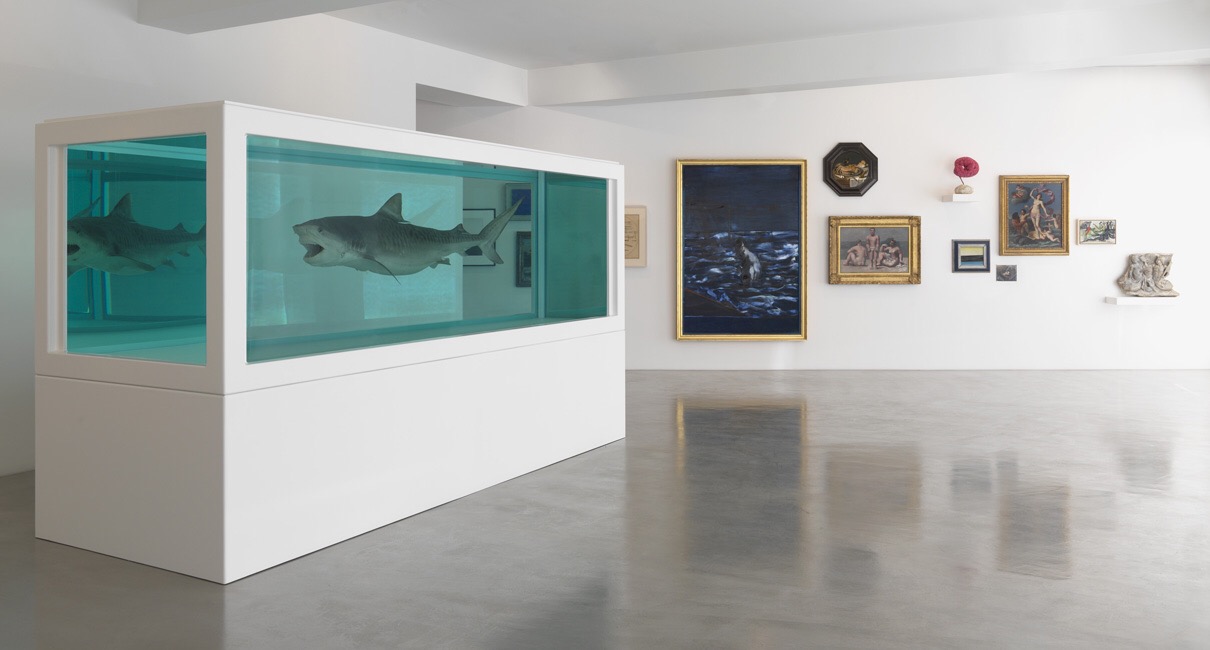