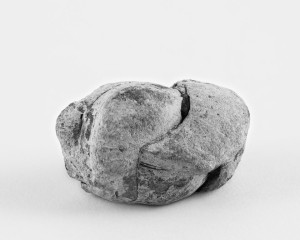 Broomberg & Chanarin’s ‘Rudiments’ is a darkly comic analysis of the absurdity of combat,  the fragility of the human condition and the brevity of life.  The shows focal point is a projected film titled ‘Rudiments’ – a collaboration with a group of adolescent army cadets, at a military camp, on the outskirts of Liverpool. The film depicts the harshly regimented structure to the cadets routine and the possible bleak outcome which may befall the cadets. The film shows the cadets ‘pratfalling’ or playing dead while another scene shows them rhythmically slapping one another round the face. The introduction of a ‘bouffon’ or clown into the film represents the ridiculousness involved in becoming a disposable cog powering the sinister leviathan that is the military. 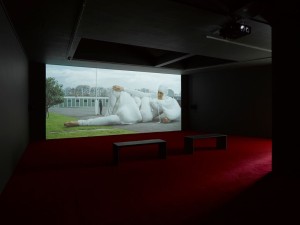 The film’s soundtrack is an amalgamation of intensely repetitive military drumming, which satisfyingly blends into the sounds resonating from the neighboring room.  The next room consists of large digital images of bullets that have been fused together by colliding head on during combat. In the centre of the room stands a drummer with a snare drum, below a clock. The drummers maintain a focused paradiddle while they periodically relieve each from their position to await there next turn.

Again the space above revolves around a solitary drummer tapping away on their lap surrounded by large photographic prints of military grade prisms found in the sights of precision weaponry. The prisms which bear a resemblance to lenses used in the same photographic equipment used by the artists is a dejectedly playful twist on the idea of shooting. 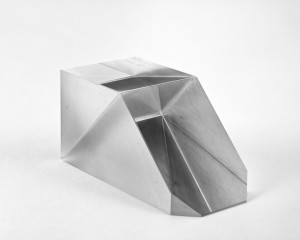 All the work  has a bleakly comic edge which perhaps gives it more impact when considering the alarming nature of the subject. The large photographic prints have an aesthetic beauty without the dark explanation, which in turn gives them the enjoyable ability to fool the viewer into thinking the are looking at something far more abstract. There is a quintessential Britishness to the show which gives a feeling of celebration towards the military whilst maintaing the severity of the grim subject matter.

Ryan Gander’s ‘Fieldwork’ also exudes a quintessentially British aesthetic whilst at the same time feeling a million miles away from the neighboring gallery space. 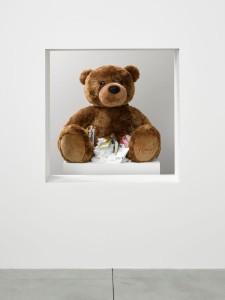 On entering the gallery the viewer is faced with a seemingly endless conveyor belt, behind a viewing window, generating seemingly endless items. A spiked bat, muddied trainers, dead pigeons, a National Trust sign pertaining to Gander’s imaginary, artistic utopia ‘Culturfield’ are but a few of the carefully curated items gliding passed in an abstract version of the ‘Generation Game’. Next to the conveyor belt is a notice board sparsely adorned with mock, generic pieces of information conjuring a feeling of fantastical normality. In the the small courtyard lies a semi transparent, fiberglass two man tent solidifying the self analytic yet voyeuristic theme.

The gallery space below has been filled with stones from the beach near Gander’s home and the piece ‘Preparation is Everything (There Will Come a Slowness ans We Should Prepare for That Also)’ consists of a large circular mirror where the artist has daubed 365 daily attempts to mix the exact colour of the sky over Saxmundham in Suffolk where Gander lives. The stones and the sky represent the artists constant autobiographical process. 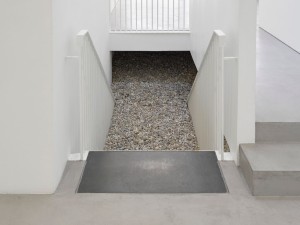 A billboard outside the gallery contains Gander’s telephone number linking in with the ideas of self analysis and obsession but also teasing the audience with the ambiguity of the possibilities involved. The artist invites the viewer in but shuts them out before the are able to get too intimate. The discarded marble clothing of imaginary statues cover mirrors and plinths making the viewer indulge in the voyeurism of wanting to know what lies beneath them. 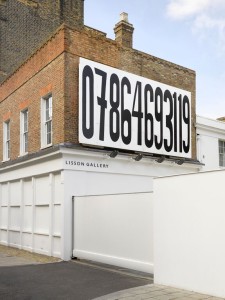 Gander’s work deals with an acute self awareness and his playful mocking of the audience gives a gratifying realisation of, or insight into his plight.

Both shows run until the 31st of October at Lisson Gallery and all other information can be found HERE. 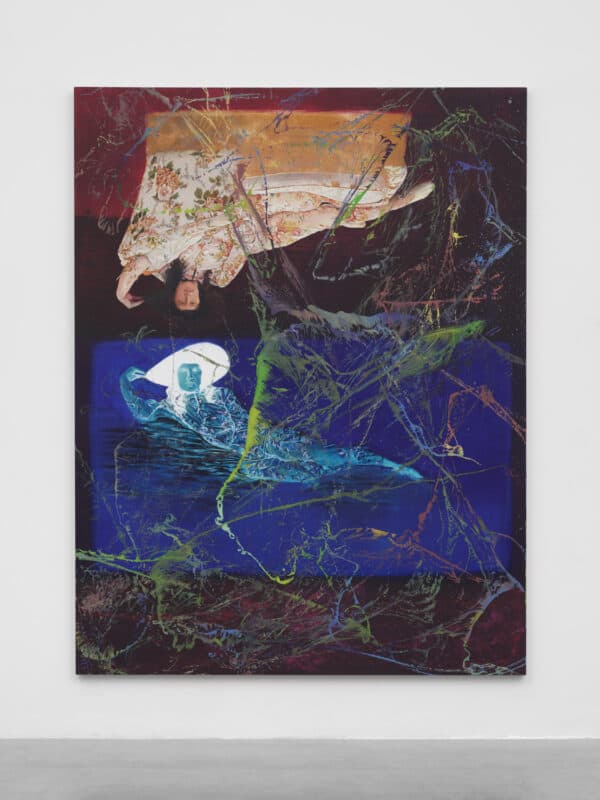 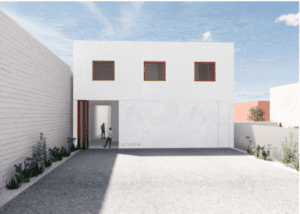 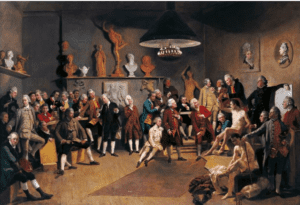