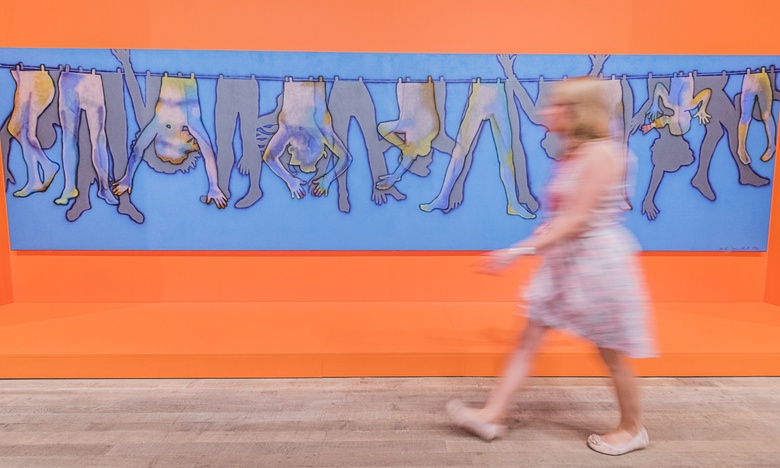 Work by female artists from the 1960s and 70s that was marginalised and ignored by a sexist art establishment is finally getting recognition in a major pop art show at Tate Modern.

“It’s never too late,” said Jessica Morgan, curator of the World Goes Pop exhibition, explaining how she and her fellow curators spent five years uncovering the hidden stories from an art movement largely remembered as Anglo-American and male.

The part played by female artists in particular had been “removed and erased” from the story of pop art. One of those artists is Judy Chicago who made her name in 1979 with her installation The Dinner Party, on permanent display at the Brooklyn Museum.

Asked how sexist the art establishment was in the 60s, Chicago threw up her arms and exclaimed: “Oh my God! When I left graduate school I was exhibiting in a climate that was unbelievably inhospitable to women. It was a real struggle.”

Chicago, whose work will be displayed at Tate Modern 50 years after she started it, recalled the response of her male teachers to the work. “There were wombs and breasts … eurgh! In the early 60s, I was just emerging from graduate school and making images like this and my male professors hated them – hated them! I had to change what I was doing or I would not have gotten my masters.”

The works are personal stories – represented by imagery that includes reproductive body parts – spray-painted on to car bonnets or hoods, but her teachers’ response meant she did not complete them until 2011.

The Tate Modern exhibition contains about 160 works, most of which are going on display in the UK for the first time. Some of the pieces by both female and male artists are from parts of the world not normally associated with pop art – including eastern Europe, Latin America, Asia and the Middle East.

Morgan, meanwhile, said the art establishment of the 60s was undeniably sexist and many female artists were often doubly misunderstood because they were thought to be telling the same stories as their male counterparts.

The French artist Dorothée Selz is featured in the show with works from 1973, in which she recreates the poses of three pin-up girls. “It is the only time in my entire career that I used myself,” she said. “Pop art objectified women but I do this … it is another vision. There are excellent male pop artists like Allen Jones and Andy Warhol, but normally the woman is to be nice and beautiful and ready to eat. Here I am questioning that with humour.”

The idea of the exhibition is to show how pop art was far more than a celebration of western consumerism – it was also a subversive international language for criticism and protest.

Most of the works never made it into public collections and the majority are being lent to the gallery by artists or their estates.

Morgan said many of the pieces had a far harder edge than traditional pop art and were ahead of their time. “If you are based in Latin America and living through the junta taking place in Argentina and Brazil, your relationship to news media [and] to US commercial culture has a much more abrasive quality to it than the celebration we associate with most work in the US and the UK.”

She said the curators had been like excavators, discovering little-known works and stories from all over the world. “We encountered such an incredible bounty of work from all these different places. Much of it completely unfamiliar to me and my colleagues.”

• The EY Exhibition: The World Goes Pop is at Tate Modern 17 September-24 January.