Lee Sharrock spoke to Spanish artist Rómulo Celdrán on the eve of his solo exhibition at Gagliardi e Domke, and to his gallerist Christian Domke about the art scene in Turin, birth place of the Arte Povera movement. 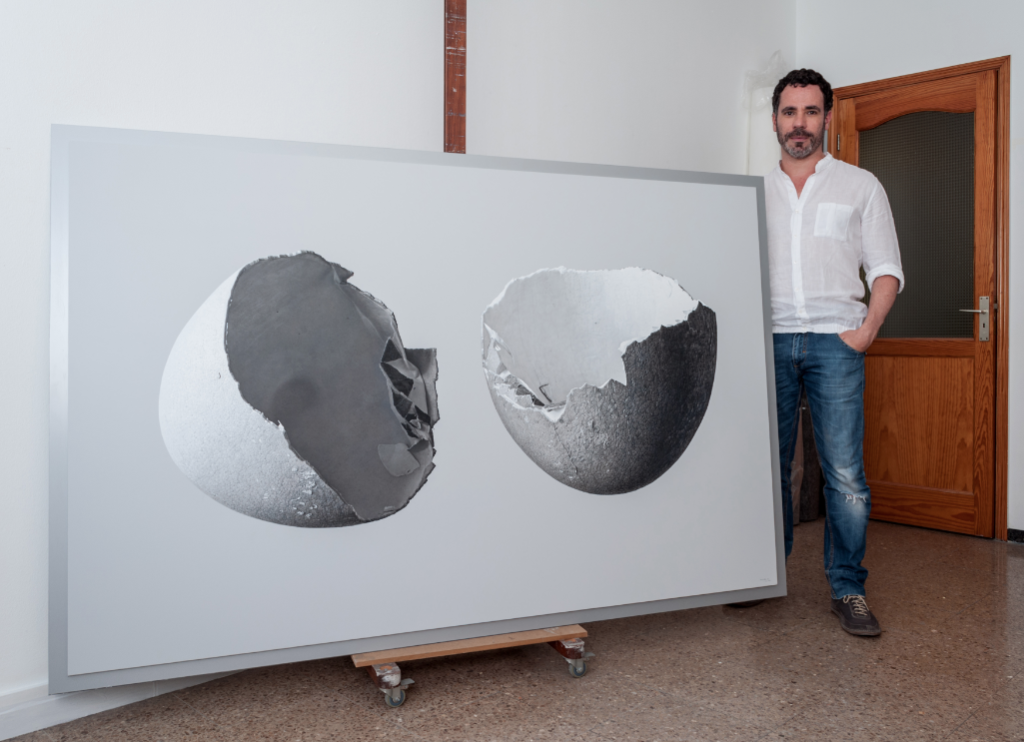 You are currently in a group exhibition at IMT Gallery in London to mark their 10th annivesrary, and have a major solo exhibition opening on 24th September at Gagliardie Domke in Turin. Is this the first time you have exhibited in Turin?

Rómulo Celdrán: Yes it is. In fact this is the first time I have exhibited my paintings in Italy and I must say that I am very excited about this opportunity.

The paintings you’re exhibiting at Gagliardi e Domke gallery this autumn are part of a series titled “MACRO.ZOOM”. How long have you been working on the series, and where did the inspiration come from?
RC: Well, for the last 6 or 7 years I have been working on some different series of works. MACRO and ZOOM have definitely been the main ones. They are in fact two series, not one. MACRO is the name of a sculpture series, while ZOOM is its equivalent series in painting.
Both MACRO and ZOOM are in fact, concepts from the field of photography and both refer to a certain approach to reality where this reality is, in some sense, enlarged or optically oversized with the help of photography lenses. I like to play with these concepts and their meaning once they are out of the world of photography and turn them into some sort of “guests” in the world of painting and sculpture. This show at Gagliardi e Domke gallery is focusing on my paintings, so they are exhibiting the ZOOM series, but we decided to use both ZOOM and MACRO concepts in the title to emphasize this playful proposal to translate this photography vocabulary to the language of painting. 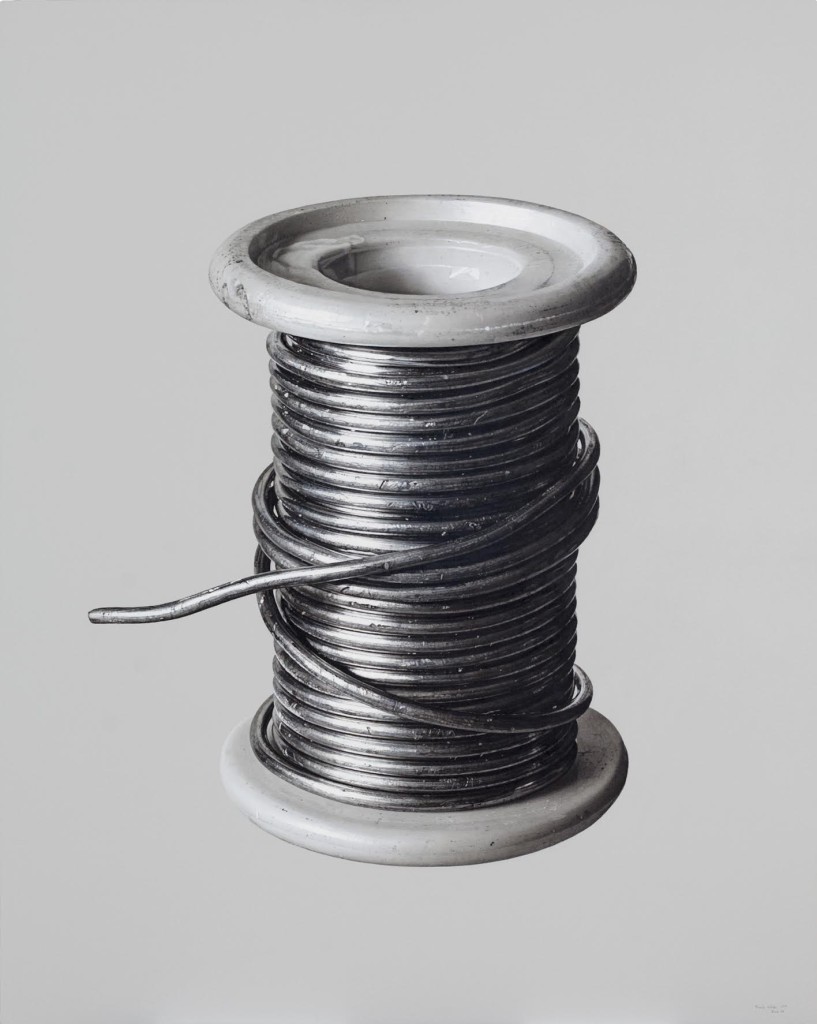 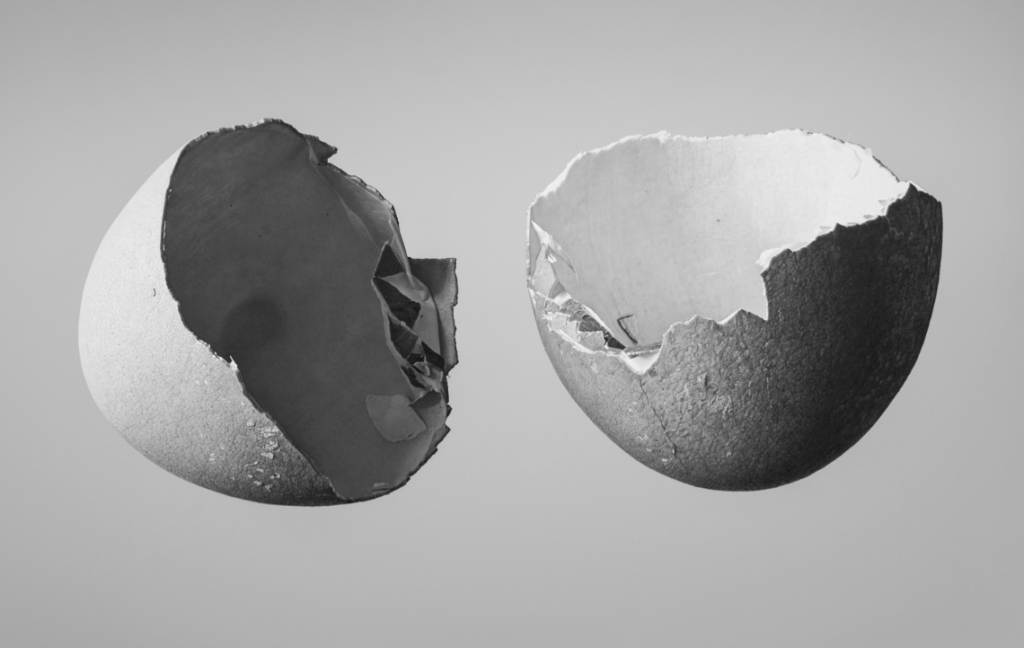 Can you explain your way of working – it must be rather labour intensive since your work is hyperrealistic and you work on a very large scale?
RC: Yes, it is very intensive and time demanding. As soon as you decide to focus on a small object, observe it carefully and enlarge its real scale, you start to realize its real complexity. All of us have experienced this when we use a magnifying glass or a microscope. I try to take this observation and curiosity to a work of art and, once in the process, every “unimportant” detail is essential.

I always work with a real model that I first observe with the naked eye, them I explore it more in depth with a magnifying glass to finally photograph it to obtain some general images and some photos with detailed areas. I could say that it is a process quite similar to a satellite going around a new planet while registering every detail on its surface. Then, when I make my paintings and sculptures, I use all this information (real object, the vision through a magnifying glass, detailed photographs) to create my works.

You are launching your autumn 2015 exhibition programme with a solo exhibition of paintings by Rómulo Celdrán. How did you come across his work, and why did you choose to launch your new season with him?
Christan Domke: We try to keep updated about what is happening in the world of contemporary art, so we stumbled across Rómulo’s works on various occasions. But it was not until we saw his works “live” at Arthoblers gallery, booth at Scope Basel that we fully understood the quality of his work. And that is when we started considering presenting him to the Turin audience.

We had to realise that it is not so easy to put together an exhibition with his works, since his production is very limited in terms of numbers. Every work is absolutely unique and often produced with tecniques developed just for that specific piece. That makes his works so out standing, but it also makes available works rare. Furthermore most of his works end up in private or public collections when exhibited, which makes it even more difficult to put togehter a solo show. We wanted to exhibit his work sooner or later, whenever it would be possible but were not planning to open the season with him. Suddenly a series of coincidences helped us to speed up things as two of his works that will be featured in our exhibition had just come back from a solo show in New York. And with the help of Manuela Hobler at Arthobler Zùrich, we had the chance to show this unique artist in Turin. But of course it was not only the mere possibility to show his works that made us organize the show. In Turin an important photography museum is re-opening in September, and, by using Romulos words, his Zoom series acts as “camera lens”. We think it can be an interesting dialogue.

Celdrán’s work will be exhibited from 24 September at your gallery in Turin, and on the same day several other galleries across the city will open next exhibitions. What do you think about the contemporary art scene in Turin?

CD: On 24 September there will be the traditional season opening, ouverture, promoted by TAG (Torino Art Galleries) association. Some of the Galleries, members of TAG, contributed significantly to the positioning of Turin’s reputation as “capital of contemporary art in Italy” and to the consolidation of the “Arte Povera” movement born in Turin in the 60’s. The city has with Castello di Rivoli, GAM, Fondazione Merz, Fondazione Re Rebaudengo and MEF, institutions dedicated to contemporary art that can compete with any other art capital in the world.

Turin has immense cultural offerings throughout the year. “Arte alle corti” has been launched this year where artists have been invited by Francesco Poli to exhibit their works in places usually closed to the public, to create a dialogue with Turins remarkable Architecture. We are glad to have contributed to this project works by Fabio Viale, Richi Ferrero, Glaser/Kunz and Jelena Vasiljev. Of course this is just an example, there is so much going on. I think Turin is really a “must-go” for everyone interested in art, contemporary or not. Last I should mention “Artissima”, the leading contemporary art fair in Italy, that we participated in on various occasions. During Artissima members of TAG, us included, will welcome the international audience with special openings.

What other exhibitions do you have coming up at your gallery?

CD: We just finished restructuring the Gallery, adding over 200 square meters of exhibiting space. A total of about 800 square meters gives us the possibility to present various exhibitions in rotation and present the gallery collection, that consists of over 900 artworks, mainly from artists represented by the gallery, at the same time. So our idea is to have constantly parts of the collection on display, making them dialogue with the rotating exhibitions. At the moment we are preparing a very interesting site-specific project by Stefania Fersini that will be on display after Romulo’s exhibition. Also planned this year are a show with the winners of “Ora” prize that is organized by Alberto Zanchetta, director of the museum of Lissone and a solo show of Antonio Marchetti Lamera.

Rómulo Celdrán ‘MACRO.ZOOM’ is at Gagliardi e Domke gallery in Turin from 24th September to 25th October 2015, and he is featured in a group exhibition I’m Ten at IMT gallery until 1st October. 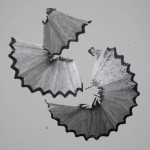 INTERVIEW: Rómulo Celdrán and his hyperreal paintings to be on display at SCOPE Basel