Ugo Rondinone’s Cloud paintings are large canvases painted in fine gradations of sky blue. Their rectangular fields transform into cloud-like undulations at their upper perimeters, creating a sharp contrast between the vaporous trompe l’oeil image within each painting and the jigsaw-style silhouette of the canvas itself. 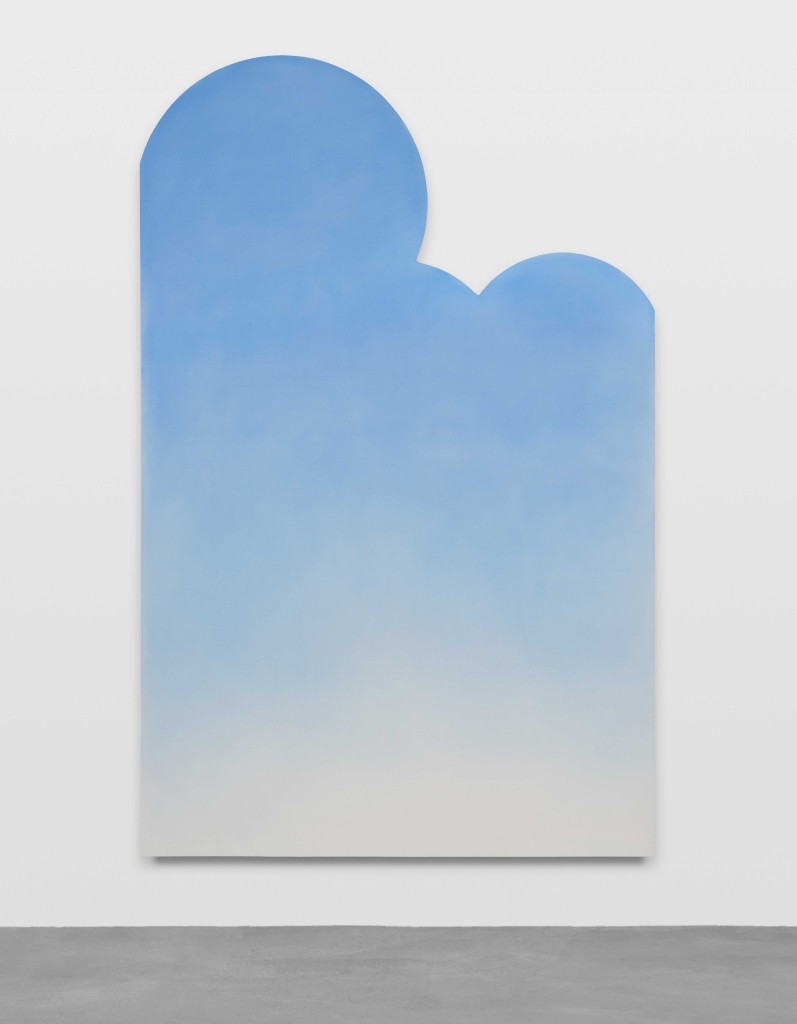 As with the artist’s other groups of paintings (including the Landscapes, Mandalas and Horizons), these works depict immeasurable space while also exuding a contrary sense of finiteness: the borders of the canvas arrest the illusion of infinity, while the title of each refers to the precise date of its creation. Rondinone has remarked that “they form an entity of time and space”, at once universal and contained. The near-blank surfaces of the Cloud paintings, ethereally painted using a sponge and dilute pigment, act as sites of imaginative possibility, in the same way as clouds themselves conjure phantasmal images and associations. In this way, they carry echoes both of Colour Field abstraction and the visionary seascapes and skies of Romantic visionaries such as Caspar David Friedrich, while at the same time subverting those precursors through their cartoon borders. More immediately, the Cloud series forms an airy counterpoint to Rondinone’s long-running series of Brick paintings, which depict solid brick walls in thickly-layered paint. 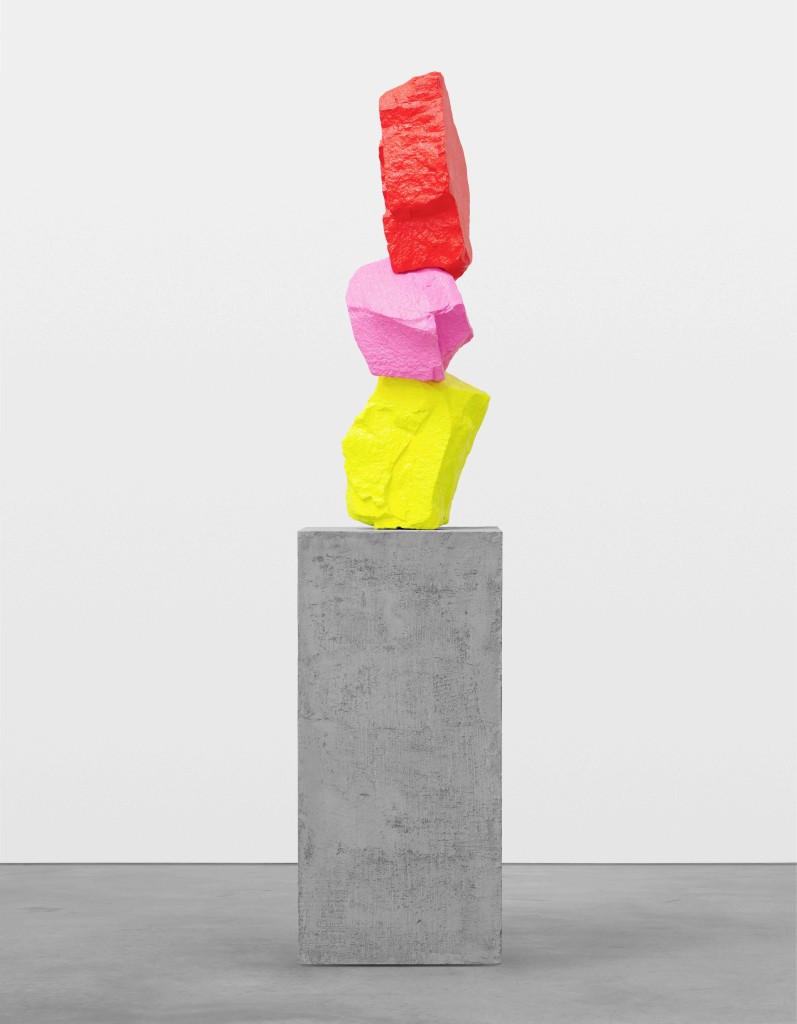 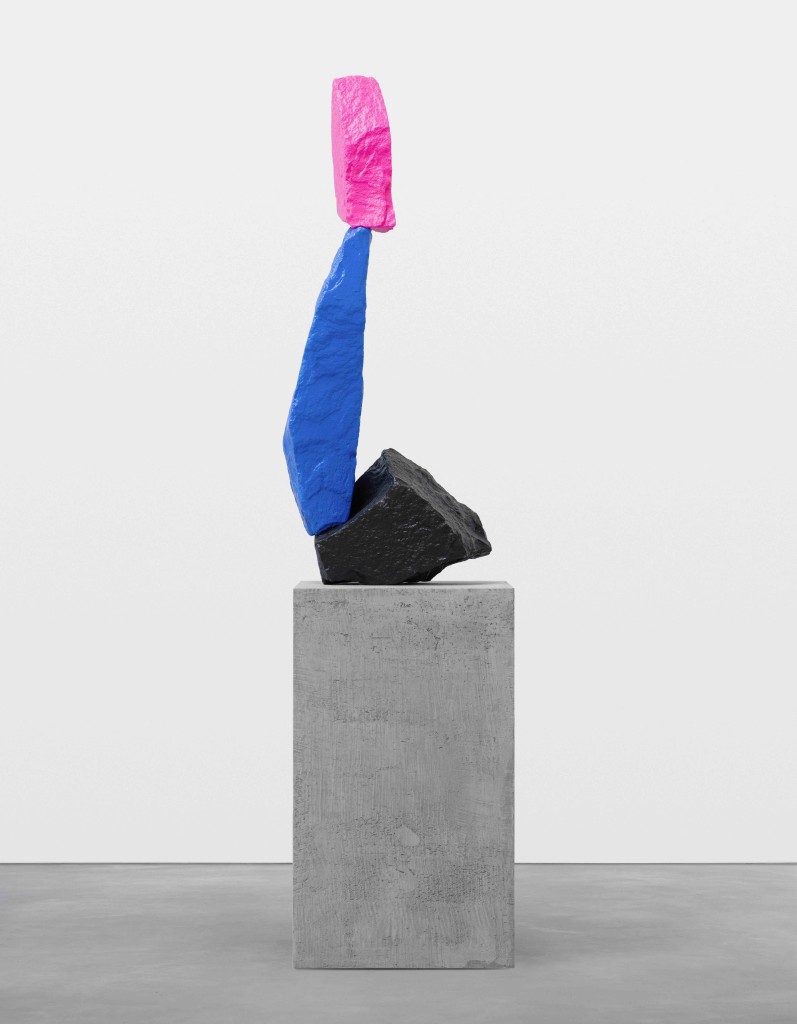 Mediating between geological formations and abstract compositions, Rondinone’s new Mountain sculptures consist of rocks stacked vertically on concrete plinths in groups ranging between two and six. Inspired by naturally-occurring Hoodoos (spires or pyramids of rock) and balancing rock formations, the stacks also evoke the art of meditative rock balancing. Each stone is painted a different Day-Glo colour, with the sculptures’ titles referring in Minimalist vein to their component pigments. The works appear poised between monumentality and collapse – seeming to defy gravity in their teetering formations, but equally to depend on it, bearing down like unsteady pillars on their concrete plinths. As with the Cloud paintings, stark physicality collides with painterly abstraction – each Mountain (like any real-life mountain) is caught between rugged literalism and metaphorical potential. As a group, they invoke parallels as divergent as the stacked totems of Barbara Hepworth and the paper cut-outs of Henri Matisse. Many veer towards anthropomorphism, suggesting figures in crouching poses or gesturing attitudes, while others abruptly resist any such associative reading.

Waterfall sculptures form the third new series – thin, freestanding lines modelled by hand in clay and cast in aluminium, whose spiralling forms evoke jets of water. Like the Mountain sculptures, these vertical forms succeed in appearing simultaneously weightless and earthbound, graceful and awkward. Delicately balanced on the floor, they seem both to cascade downwards and unfurl upwards in the manner of an Indian rope trick, yet their mottled surfaces – indented with fingerprints and ridges – profess their rigidity and artifice. Rondinone’s paintings and sculptures have frequently referred to primordial phenomena – air, moons, the sun, the cosmos – in their titles or forms. Referring concurrently to the natural world, romanticism and existentialism, his latest works encapsulate a “mental trinity” that has underpinned his art for more than twenty years.

About The Artist
Ugo Rondinone (Swiss, b. 1964) lives and works in New York. He has long embraced a fluid range of forms and media. As a whole, his work constitutes a complex network of responses to social and physical structures. By allowing himself such formal and thematic freedom, Rondinone creates the conditions for an expansive emotional range.