The Whitechapel Gallery to present the largest single, historical presentation of Arab art in the UK. - FAD Magazine
Skip to content

Continuing the Whitechapel Gallery’s programme to open up rarely seen art collections for everyone, Whitechapel bring you a series of four chronological displays from the Barjeel Art Foundation’s rich collection. Artists from Algeria, Egypt, Iraq, Lebanon, Palestine and elsewhere in the region tell the story of Arab art from the modern to the contemporary period.

The Barjeel Art Foundation is based in the UAE and was founded by Sultan Sooud Al-Qassemi in 2010. It holds one of the most extensive collections of art from the region, dating from the 1900s to the present day. This series of exhibitions at the Whitechapel Gallery features over 60 artists and 100 works of art from the collection, and explores four different themes, which examine ways of defining Arab art from its early modernist beginnings and geographies.

Opening today (Tuesday 8th September) and continuing to December 2016, the exhibition is in 4 parts outlined below: 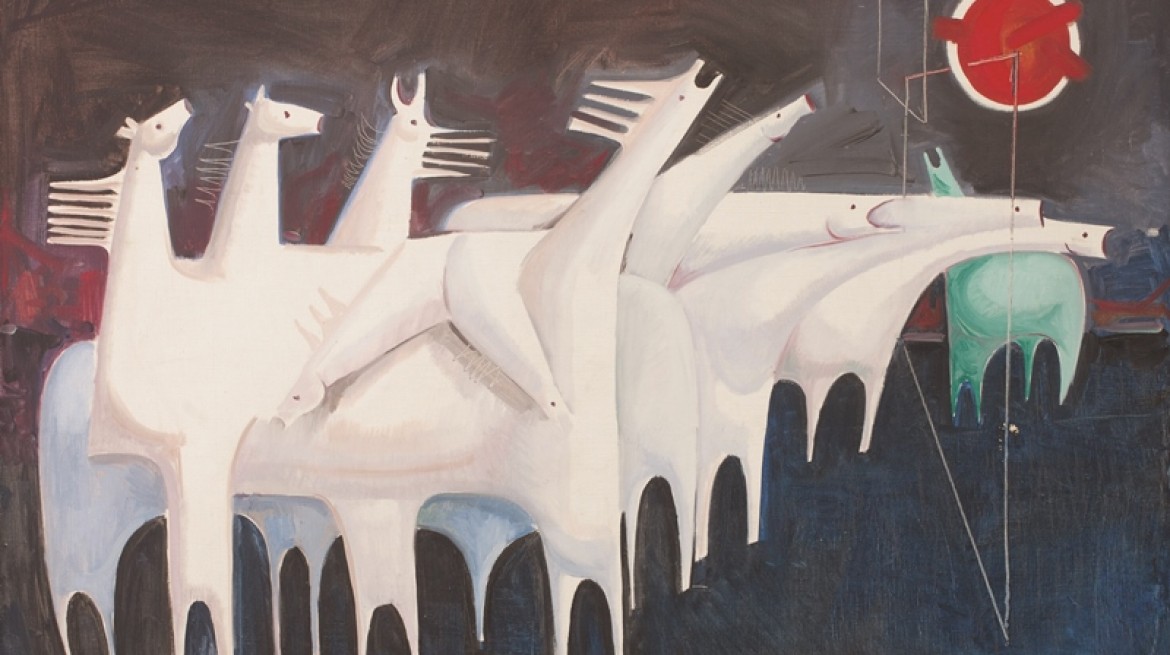 Opening today this first display of works explores the emergence and subsequent development of an Arab art aesthetic through drawings and paintings from the early twentieth century to 1967, an important historical period in the region. Display highlights include a portrait painting of a young woman in profile by Armenian-Egyptian artist Ervand Demirdjian titled Nubian Girl, which is believed to be one of the earliest works in the collection made between 1900 – 10. An early career painting by Dia Azzawi, recognised as one of Iraq’s most influential living artists, is also on show alongside Kadhim Hayder’s painting of symbolic white horses titled Fatigued Ten Horses Converse with Nothing (The Martyrs Epic) (1965). The display ends with Hamed Ewais’s Le Guardien de la vie (1967-8), a large-scale oil painting that depicts a fighter, weapon in hand, while underneath him everyday events such as a wedding taking place and a child riding a bike are shown, suggesting the possibility of societal renewal following the collapse of the Pan-Arab ideal after the Six-Day War in 1967. 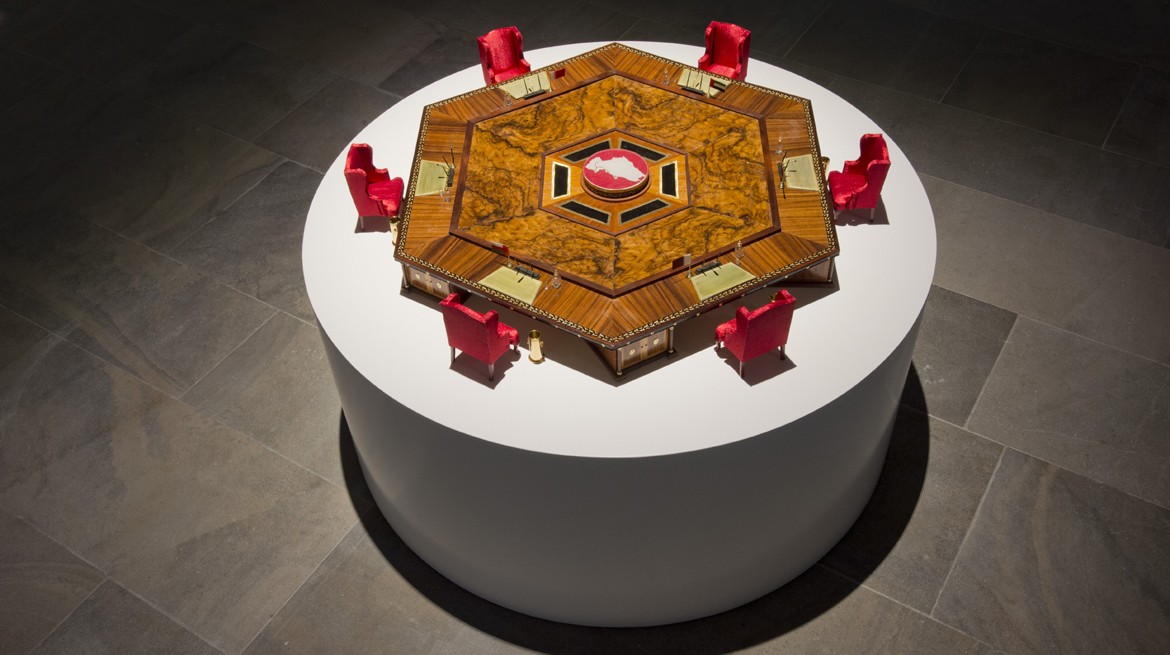 Barjeel Art Foundation collection: Part 2 15th December 2015 – 17th April 2016
This second display focuses on figurative works of art in the collection produced between 1968 and 1987. This second display starts with an ink and pencil drawing Erotic Composition (1967-70), by Lebanese artist Huguette Caland which is a study for the abstract, sensual paintings of the body that she created later on in her career. In The Three Palestinian Boys (1970) by Marwan Kassab Bachi, the unique perspective shows only two of the three boys in full in the painting, suggesting the third has met a tragic fate.
Also on show are silkscreens by influential artist and writer Kamal Boullata, which depict Islamic calligraphy as colourful patterns. The texts written on the silkscreens are statements such as La Ana Illa Ana (There is No ‘I’ but ‘I’) (1983), a play on the Islamic saying ‘There is No God but God’ which challenges the notion that Arabic script is always Islamic when it is visually represented.

Barjeel Art Foundation collection: Part 3 26th April – 14th August 2016
In the third presentation, photography and video works made between 1990 – 98 go on display. Highlights include Moroccan artist Yto Barrada’s photograph Rue la Liberté (2000) of two men embracing with their backs to the camera. The image is part of Barrada’s wider series ‘The Strait Project’ (1998-2004) which documented individuals waiting to escape to Europe across the Strait of Gibraltar over a decade. Photographs from Lebanese artist duo Joana Hadjithomas and Khalil Joreige’s series ‘Faces’ (2009) are also on show. Since the civil wars in Lebanon began, portraits of men who have died fighting for a political or religious cause cover walls across the city. Hadjithomas and Joreige documented some of these posters that have been distorted over time and the process of redrawing some of the faded faces, exploring issues around image circulation, availability and marking moments in history.

Barjeel Art Foundation collection: Part 4 23rd August 2016 – 8th January 2017
The fourth and final display explores how artists using various media artistically engage with the cities where they either live or work. Highlights include Micro Council (2013) by GCC which is a wood, brass and acrylic sculpture resembling in miniature, the circular round table where the leaders of the six Gulf States meet. The work critiques the self-importance of the six leaders and their recent talks on the formation of a Gulf Union. Also on show is Etel Adnan’s Champs de Petrol (2013), a two-metre tapestry that uses brightly coloured abstract forms in the form of a map to suggest a sequence of oilfields, while Iman Issa imagines a shimmering and fragile glass monument for Tahrir Square in Cairo with Proposal for a Crystal Building (2014). Jumana Manna examines public spaces through her sculpture Unlicensed Porch, Jabal al-Mukaber (2014) of a limestone porch taken from territories in East Jerusalem. This final display also includes Lawrence Abu Hamdan’s The All-Hearing (2014), a single-channel video that examines noise pollution in Cairo.

About
Barjeel Art Foundation is an independent, United Arab Emirates- based initiative established to manage, preserve and exhibit the personal art collection of Sultan Sooud Al Qassemi. The foundation’s guiding principle is to contribute to the intellectual development of the art scene in the Arab region by building a prominent, publicly accessible art collection in the UAE.