Pace London is to present an exhibition of work by the Japanese artist Kohei Nawa.
Nawa comes to London as part of She Inspires Art, an exclusive evening of installation, performance and fundraising on 16th September in support of Women for Women International’s work with women in Nigeria and Syrian refugees in Iraq, for which he will be creating a major installation at Bonhams, New Bond St, open to the public on 15th and 16th September. 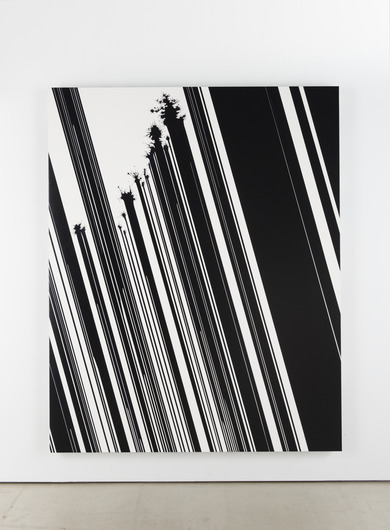 Moving fluidly between media, Nawa’s work explores issues of science and digital culture while challenging viewers’ sensory experiences. Interested in industrial mass-production, Nawa often works with synthetic compounds, using them to mediate between ideas of the real and the virtual, perception and illusion.

His exhibition at Pace will explore the idea of force, which he conceives as a set of invisible operations dictating the behaviour of materials.

“Force in this sense refers to the gravity that exerts an influence on all things that exist in a space, the force that allows vegetation to grow up from the ground, and the force that enables slime mould to creep along a wall,” 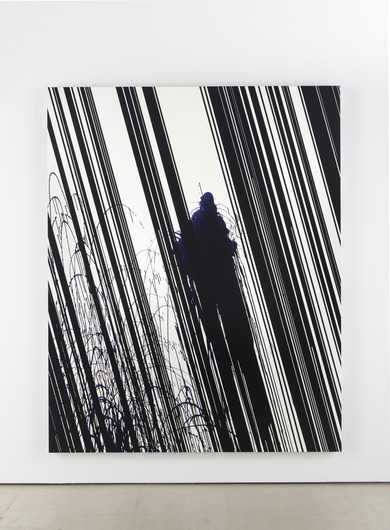 Presented on the first floor gallery, the exhibition will include drawings, sculptures and site-specific installations from four of Nawa’s Direction, Ether, Catalyst and Moment series.

In his Direction paintings, Nawa pours black paint onto a vertically set canvas. He offsets the grain of the canvas on the stretcher by fifteen degrees, and then allows the paint to slowly drip down the face of the canvas, allowing the force of gravity to produce the lines of the painting. The repetition of this action creates a set of parallel stripes that cover the canvas. The relation between the points and the lines not only yields visual stimulation but also enhances the dynamic impression of the space as a whole entity. The speed of movement, direction and gravity resonate hereby inspiring sensibility.

His newest body of work, the Moment series similarly uses a two-dimensional plane to capture the forces of physics. Using a pendulum device, Nawa unleashes acrylic ink onto a paper surface, creating a swirling set of concentric circles and overarching lines. The orderly nature of the lines seems to contradict the haphazard nature of their making, yet Nawa’s work forces viewers to consider the effects of air pressure, distance, and the motion of the pendulum as agents in making the work.

Gravity is the driving forces in his Ether series, which captures high-viscosity fluid into a solid state at the moment it is dripping downward. Appearing as a three-dimensional sculpture, the iterative forms of the droplets appear as an endless column and visualize the force of gravity while also creating a feeling of weightlessness. 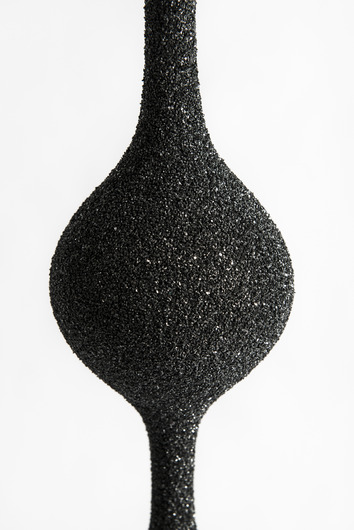 The exhibition will include a site-specific wall work that is part of his Catalyst series. Like the Ether work, Nawa employs a fluid material in his Catalyst sculptures—in this case hot glue—to highlight the transition between liquid and material states. Building on the legacy of post-impressionism and process art, the Catalyst works are net-like sculpture drawn directly on the wall. The different dots and strands of glue accumulate into an almost biological form that seems to crawl across the wall.

In his trademark series Beads, Nawa utilises stuffed animals collected from auction websites that he covers with glass beads, polyurethane foam or prism sheets. These materials fragment the exoskeleton of the sculptures into PixCell—a portmanteau of pixel and cell that refers to the constitutional elements of biology and digital forms. These bead-like forms absorb texture of the object and its colour, abstracting the core animal form into image cells, staging a confluence of the real and the virtual while questioning the status of both terms.

About The Artist
Kohei Nawa (b. 1975, Osaka) lives and works in Kyoto, Japan. After a semester abroad at the Royal College of Art, London, he received a PhD in Fine Art Sculpture from the Kyoto City University of Arts (2003). In 2009, he founded the creative platform SANDWICH in Kyoto, thereafter serving as its director. Notable solo exhibitions include: L_B_S, Ginza Maison Hermès, Tokyo (2009); Synthesis, Museum of Contemporary Art, Tokyo (2011); and SCULPTURE GARDEN, Kirishima Open-air Art Museum, Kagoshima (2013). He has shown work in numerous international biennials and triennials including the 6th Asia Pacific Triennial, Brisbane (2009); 14th Asian Art Biennale Bangladesh 2010, Dhaka (2010), where he won the grand prize; and Aichi Triennale 2013, Nagoya (2013). Nawa is a Professor of Graduate School / Art and Design Studies at the Kyoto University of Art and Design.

WOMEN FOR WOMEN INTERNATIONAL
Since 1993, Women for Women International have supported over 420,000 of the most socially-excluded women survivors of war in Iraq, Afghanistan, South Sudan, Nigeria, Democratic Republic of Congo, Rwanda, Bosnia-Herzegovina, and Kosovo; and our work has never been more pressing than it is today. With the rise of extremist groups like ISIS and Boko Haram, the women they serve live in some of the world’s most dangerous places. Where extremism and conflict take root, the livelihoods, freedoms, and security of individuals suffer – and it is women and children who bear the brunt. Yet when given the tools, resources and knowledge to access livelihoods and protect their rights, women can literally transform their families, communities – and ultimately their nations. Through its 12-month programme, women learn about their rights, as well as key life skills They also learn vocational and business skills to access livelihoods and break free from poverty. Communities are not, of course, made up of just women and because the whole community benefits when everyone in the community is involved, Women for Women International also engages men as men are powerful advocates for women’s empowerment, breaking down prejudices and practices which prevent women from reaching their potential. More information: womenforwomen.org.uk

SHE INSPIRES ART
This September leading lights in the international art world, for the first time ever, are creating special one-of-a-kind pieces generously commissioned by Patrons for She Inspires Art, in support of Women for Women International’s work with women in Northern Nigeria and Syrian refugee women in Northern Iraq.

Combining the power of installation and performance art, and involving a year of collaborations and exclusive events such as private studio views with artists, She Inspires Art is brought together by Chair Lady Alison Deighton and a dedicated high profile Honorary Committee with Artistic Directors/Curators Tamar Arnon and Eli Zagury.

Hosted at Bonhams’ flagship saleroom in New Bond Street on 16th September, She Inspires Art is a unique, immersive event. A highlight of the event will be the involvement of internationally renowned artists such as Kohei Nawa and performance artists such as South African performance art duo Nelisiwe Xaba and Mocke J Van Veuren and Amanda Coogan. She Inspires Art will also feature a select live auction with highly collectable pieces by artists including Etel Adnan, Fabienne Verdier, George Shaw, Idris Khan, Kevin Francis Gray, Massimo Izzo, Sevan B?çakç?, Zaha Hadid and Zhu Jinshi. Art lovers unable to attend the event on 16th September are able to join the auction and purchase one of these exciting one-of-a-kind pieces online now and via phone on the night. www.womenforwomen.org.uk/ways-give/events/she-inspires-art

Marc Glimcher, CEO and President of Pace Gallery has just announced the gallery’s representation of Jules de Balincourt in collaboration […]