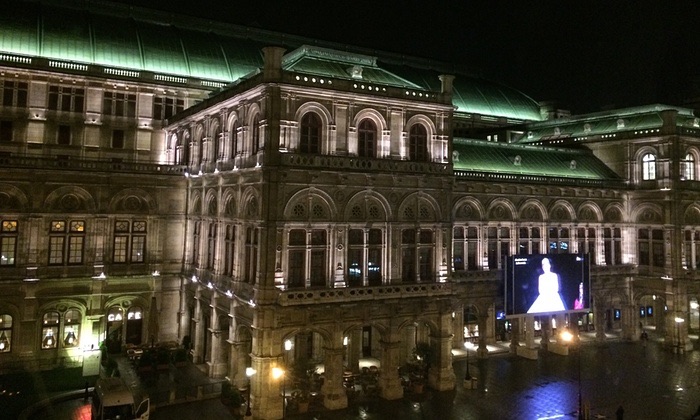 The art world is your oyster … the glittering palaces of Vienna’s Ringstrasse open their doors. Maeve Kennedy Photograph: Maeve Kennedy

This article titled “The Art Fund charity launches a line of luxury holidays” was written by Maev Kennedy, for theguardian.com on Friday 21st August 2015 12.17 UTC

There’s nothing particularly alluring about the back way into Vienna’s Kunsthistorisches Museum: up a few dimly lit steps, past a staff noticeboard and through a scuffed white door. But that door delivers you straight into the spectacular central hall, under the soaring frescoed dome – and lets you smugly bypass the queue of tourists waiting to buy tickets. It’s the sort of experience some people are prepared to pay £1,000 a day for.

Such doors are the unique selling point for the Art Fund’s new range of exceedingly expensive holidays: special access for small groups of rich people, beyond the red rope, past the sign that says closed, through the door marked private, sharing an artist’s modest favourite cafe for lunch, taking tea with a princess, or swaggering into a VIP reception after hours.

The VIP route through the Kunsthistorisches Museum leads on up the grand staircase, under the Gustav Klimt murals, and into the glamorous, newly restored Kunstkammer galleries. Curator Jasper Sharp is our host on hand to explain the contents of the treasure rooms, stuffed with gold, silver and jewels, imperial executive toys including Emperor Rudolf II’s 17th-century centaur (which fires golden arrows to indicate which diner must make the next toast), or priceless works of art such as Benvenuto Cellini’s fabulous 16th-century alt cellar, once stolen from the museum by a man who shinned up some scaffolding and insisted he’d only done it to test the efficacy of the burglar alarms.

Outside the museum’s walls lies the Ringstrasse, the grandest ring road in Europe, a boulevard lined with gigantic homes and palaces of art, commerce and politics, built along the demolished medieval fortified city walls. It officially opened in May 1965 and is now a Unesco world heritage site. Here, the Art Fund guide is Andreas Nierhaus, an art historian who can not only open the doors out of hours at the Wien Museum where he works, but can shove open massive wooden doors on the street, between the cafe tables and the postcard stands, that lead up to sumptuous first-floor rooms with gilded ceilings, frescoed walls and porcelain stoves the size of London flats.

When the Ringstrasse was built, the site of the Vienna Contemporary art fair would have been far removed from the gilded world of the waltzers and opera-goers. The art fair will happen for the first time in a spectacular new venue, the Marx Halle, a vast, converted 19th-century cattle market. The organisers have particularly good contacts, not just with Vienna’s growing gallery scene, but with young artists in eastern Europe. Prospective tour groups will be treated better than royalty: they will be welcomed as art-buying oligarchs would be, with flowing champagne and introductions to artists and dealers.

On the last day of the tour, the road will lead out of Vienna, halfway to the Hungarian border, for lunch with the Count and Countess Waldburg-Zeil at Rohrau castle, a building somewhere between a fortress and a farmhouse, with a spectacular art collection that traces the history of the family and its engagement with the tangled politics of the Habsburg and Austro-Hungarian empires.

Perhaps the most fun part of my trip was sharing a wiener schnitzel with the amiable artist Peter Kogler at the Gasthaus Wild, an endearingly modest brown cafe a stone’s throw from his home and studio: September’s tourists will have tea with the sculptor Erwin Wurm at his home and studio.

The Vienna trip was very enjoyable, but this is clearly not art for the masses: prices for a three-night holiday will start at £1,800, flights not included. Prices rise to the dizzying heights of £9,915, without flights, for 10 days in Japan next year with the art historian Sophie Richard.

It all seems a curious choice for a charity such as the Art Fund, which has vociferously championed universal free museum access. The VIP cultural travel market it is venturing into is already well supplied, with a range of specialist companies offering art and archaeology holidays, often accompanied by distinguished academics and authors: Cazenove+Loyd, the company operating the Art Fund’s holidays, already has a track record in tailor-made cultural trips outside Europe, and the Art Fund itself already offers two ranges of less eye-wateringly expensive holidays.

“Our members are really very seriously interested in art, and it’s the level of access you will get on these holidays that makes them really special. We are all about engaging audiences with art, at every level,” said Carolyn Young, marketing director of the Art Fund. “These holidays have been designed to offer unique encounters, whether you view them as a once-in-a-lifetime experience, or just another very nice holiday.”

The Art Fund is described as “the national fundraising charity for art”, with a 110-year history of helping museums and galleries acquire spectacular objects – including recently Van Dyck’s dazzling self-portrait for the National Portrait Gallery – and a notable track record on campaigning on museum issues.

Most of its funds come from its 117,000 members, who pay £60 a year for a National Art Pass that gives them free or discounted admission to museums and exhibitions. But the call on its resources are endless, and sure to increase as museum cuts bite harder. The holidays – which the Art Fund badges, helps design, takes a commission on, but doesn’t actually run – are a useful extra revenue stream, Young says. But she also believes the travellers will get extraordinarily close encounters with art historians, artists and museum experts, which would be extremely difficult to engineer in any other way.

Anyone who can afford the deluxe holidays is likely to find they have formed a warm and lasting relationship with the Art Fund. “If you can afford to spend £4,000 for a four-day trip, you are probably quite a good prospect for our donor programme,” Young said, thoughtfully.

• Maev Kennedy travelled to Vienna with Cazenove+Loyd in partnership with the Art Fund. Art and Architecture in Vienna , 23-26 September, prices from £1,800 per person based on two sharing, including breakfast, two lunches, two dinners, private guiding, transfers and entrance fees.