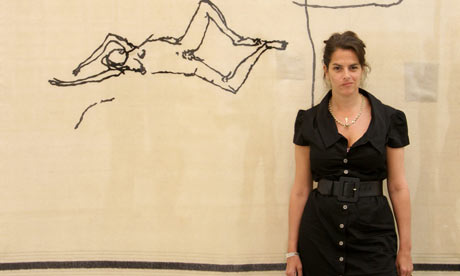 When she bought a £4m stake in a historic quarter of east London, Tracey Emin won local support with her plans to restore buildings and keep them in artisan use, to help stem the tide of commercial development flooding the East End.

Seven years on, the artist’s new proposals to demolish a “charming” listed building and replace it with a purpose-built studio and home are causing ructions among residents and heritage lovers.

Conservationists have described her plans as “short-sighted”, while Tower Hamlets council, due to examine her proposals in detail in September, reports 25 letters of objection and none in support.

The East End Preservation Society (EEPS), whose supporters include broadcaster Dan Cruickshank, are urging locals to vote against the artist’s scheme to pull down the 1920s complex in Bell Lane, Spitalfields. Save Britain’s Heritage, which plans to oppose the new proposals, has described the replacement studio house as “angular and blank”.

Speaking in 2008 about buying Tenter Ground, established in the 17th century by Flemish refugees, Emin spoke of the importance of the area’s unique architectural heritage and its artisan history. She planned, she said, to restore the former factory within to its original form before turning it into a studio.

In an interview with the Observer, Emin said of the factory: “It is a listed building and it is important to me to keep artists working in the area and keep it in artisan use. And also not to have it turned into a hotel or restaurant.”

But, according to her new planning proposal, she now aims to create a new house at Bell Lane, linked to her existing studio at Tenter Ground.

In a heritage statement on Tower Hamlets council’s website, she acknowledges that the existing building at Bell Lane “makes a positive contribution to the conservation area” but argues that the public benefits of a “very high quality design” could outweigh the “harm of its removal”.

If the new proposal is successful, it will be designed by Sir David Chipperfield, a leading British architect known for his modern, minimalist designs. It will cover five floors and will adjoin a studio already owned and used by Emin.

In the statement, Emin stresses the importance of having two adjoining buildings, for “consolidating her way of living and working into one entity which is capable of adapting to new practices over the whole lifetime of the artist, enabling any artist occupier to live and work there for the whole of their working career”.

“Contemporary art production is a highly intensive process and a round the clock endeavour,” it says, where “the line between an artist’s work and home life can be blurred.

“Similarly, the production of contemporary art can by turns be deeply personal (the artist working creatively on their own) and also collaborative, with the involvement of staff and studio assistants who also assist with the business side of the operation.

“It should also be noted that the home is also sometimes the meeting place for the artist to meet collectors, curators and critics. The living space must therefore be well lit and suitable for the display of art in a variety of media.”

But Clem Cecil, director of Save Britain’s Heritage, criticised the plans. “This charming building on Bell Lane is an important part of the townscape. Our recent campaign in the Strand illustrated just how strong public opinion is about ordinary London buildings, of which this is a wonderful example. Save strongly opposes Emin’s plans to demolish this building. It is characterful and well proportioned and protected in law. The proposed replacement is angular and blank and makes a negative contribution to the streetscape.”

Save Britain’s Heritage has urged the artist and Tower Hamlets council to retain the building.

A spokesperson for the EEPS also expressed disappointment at the plans. “The East End Preservation Society is dismayed by Emin’s disregard for this much loved locally listed building. For someone who has actively fought for East End heritage in the past this is beyond understanding and only suits her own short-sighted needs. We urge people to object to the scheme.”

A Tower Hamlets council spokesperson said: “The council has, to date, received 25 objections and no representations in support to the planning proposals for the property at 66-68 Bell Lane. The application is currently being considered by planning officers and if they are minded to recommend the application for approval, it will need to be presented to the council’s development committee for a decision, which is likely to be in September.”