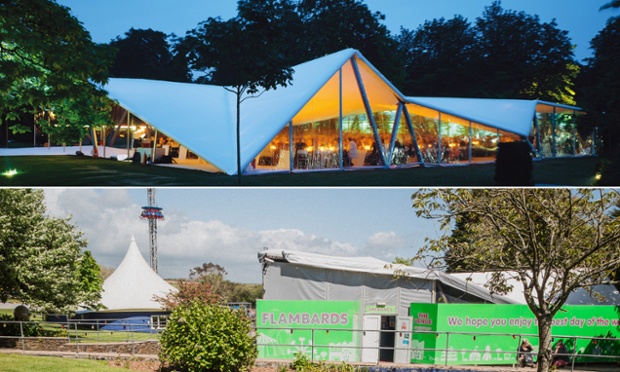 Zaha Hadid’s Serpentine pavilion in 2000, top, and at Flambards theme park near Cornwall in the present day (below). Photograph: PR/Ben Mostyn for the Guardian

As the Serpentine Gallery prepares to open its annual summer pavilion, dusting off the champagne flutes for its glitzy VIP receptions next week, the first ever pavilion in the 15-year-old programme is playing host to a parallel summer party of a rather different kind. Three hundred miles south-west, in a far-flung corner of Cornwall, the zig-zagging roof of Zaha Hadid’s experimental marquee is providing an unusual shelter for an under-12s’ fancy dress ball.

“I admit it’s looking a bit sad and sorry for itself, but it has served us well,” says Michael Enright, managing director of Flambards theme park in Helston, where the pavilion now stands between a fibreglass model of Humpty Dumpty and the Shiver Me Timbers adventure playground. Shrieks of terror rain down from the teetering tower of the nearby Skyraker ride, while more screams come from dangling chairs, whirling from a carousel above a bucolic backdrop of rolling fields.

As just another tatty marquee in a jumbled landscape of peaked tents and ageing geodesic domes, the former Serpentine pavilion is barely recognisable as the futuristic origami structure that landed in Kensington Gardens in 2000. Its white canvas roof is sagging and stained, its formerly transparent walls replaced with crumpled sheets of silvery PVC.

“It’s quite a challenge to maintain,” says Dean Woods, the park’s entertainment co-ordinator, as he sets up for the afternoon’s I’m a Celebrity Bug Eating Challenge, laying out bowls of insects on a stage decorated with plastic jungle ferns. “Because of all the different angles in the roof, as soon as I’ve fixed one bit, then the water ponding shifts to another area.” He has fitted makeshift yellow plastic gutters and added poles to prop up the roof, while a Wall’s ice-cream bin on top of the chipboard dressing room keeps the ceiling from caving in behind the stage.

Over the years, the Serpentine pavilion programme quickly became established as an annual christening of starchitects’ baubles, and most pavilions have been sold off to private collectors – with the help of estate agent Knight Frank – and a Rolodex of high-net-worth individuals. The collectors see their purchases as charitable donations to the gallery: the sum covers around 40% of the project cost, with the rest made up by sponsorship and help-in-kind.

Last year’s ethereal space-egg, by Smiljan Radic, was bought by the Hauser and Wirth gallery, where it is now ensconced in a meadow in the grounds of their Somerset outpost. But it’s one of the few that are open to the public. Daniel Libeskind’s 2001 pavilion briefly popped up in Cork, for the city’s European Capital of Culture celebrations in 2005, where it was described as an “icon of contemporary Cork, as well as an expression of the creative architectural possibilities for the city’s future”. It hasn’t been seen since, now likely languishing in storage.

But 15 years ago, the inaugural pavilion wasn’t on any collectors’ radar. So after its spell at the Serpentine, it became a temporary theatre in the car park of the Royal Shakespeare Company in Stratford-upon-Avon. When its undulating roof proved a challenge for audience sight-lines, it was dismantled and donated to a local farmer.

“It was a very good buy,” says James Hale, former director of Flambards, who acquired the structure a decade ago. “It was much cheaper than an off-the-peg marquee, because they wanted to get rid of it. I had a thing for collecting unusual buildings – we’ve got pavilions from Goodwood and a tensile dome from Switzerland – so I snapped it up.”

Since then, the pavilion (which is now known as the Kingsford Centre, hireable for £500) has played host to weddings and discos, comedy nights and concerts. On rainy days they screen cartoons here and have face-painting sessions. A Stranglers gig once attracted a crowd of 600, while a World Cup evening bequeathed the building its green carpet floor, which sinks in places where the original wooden base has rotted away.

The provenance of this humble tent comes as news to the current staff at Flambards, although they seem unfazed when I explain that they are proud owners of one of Zaha Hadid’s first-ever buildings, the early work of a designer who is now dotting the world with fantastical opera houses, art museums and rippling skyscrapers. “Her first building?” says general manager Richard Smith with a wry smile. “Well that explains a few things.”

While Hadid’s pavilion has led an anonymous afterlife, other Serpentine structures have gone on to be resurrected as celebrated trophies by their wealthy owners. Two pavilions are currently enjoying a sun-kissed retirement in the south of France: Toyo Ito’s triangulated white box from 2002 now stands on a beach near Nice, where it is undergoing refurbishment as a cafe for Le Beauvallon hotel. It was brought there by Hong Kong property developer Victor Hwang, the one-time owner of Battersea Power Station, where it was briefly deployed as a venue for eating overpriced cakes.

Two hours’ drive west, near Aix-en-Provence, stands the crooked heap of Frank Gehry’s 2008 pavilion, a wayward pile of chunky wooden columns and faceted glass canopies that appear to be caught mid-collapse. It might look like the instruction manual got lost in shipping, but this is how it was always meant to be. Indeed, the structure makes more sense here in Chateau-la-Coste, surrounded by an elysian landscape of vineyards and wooded hills, than it ever did lurching drunkenly outside the Serpentine Gallery.

It was acquired by Irish property developer Paddy McKillen, whose luxury empire includes Claridge’s and the Connaught hotels, and who has assembled something of an architectural menagerie on his French domain over the last decade. Gehry’s pavilion, which is used for outdoor concerts and events at this centre of biodynamic wine production, joins a concrete visitor building by Tadao Ando, a barrel-vaulted winery by Jean Nouvel and an 18th-century teahouse from Vietnam. A wine cellar-cum-art gallery by Renzo Piano is currently under construction, along with a Richard Rogers pavilion and designs by Kengo Kuma, Sou Fujimoto and Junya Ishigami in development. Buying the pavilion seems to have given McKillen something of a bug for amassing signature architectural trinkets. And he’s not the only one to have caught it.

“I suppose the addiction started in 2003,” says a collector who has acquired no less than four of the past Serpentine pavilions, speaking to me on condition of anonymity. “I fell in love with the Oscar Niemeyer project, and I just had to have it.” Then came Alvaro Siza and Souto de Moura’s wooden gridshell, which he was “bowled over by”, then the Rem Koolhaas balloon, then Olafur Eliasson’s spiralling cone, all of which he acquired “for many millions” – but which now lie packed up in storage. His long-term ambition is to find a site where they can be rebuilt and opened to the public, “rather than being a private folly,” but he has no current plans for what or where. So what brought an end to his pavilion spending spree? “Money,” he says. “They got rather pricey. I’m not in the league that allows me to go round buying things for the sake of buying things.”

One couple who are very definitely in that league, and who funded and then acquired the 2012 pavilion by Ai Weiwei and Herzog and de Meuron, live just across the park from the Serpentine on the “billionaires’ boulevard” of Kensington Palace gardens, in what was reported to be the most expensive house in the country when they bought it. But Lakshmi and Usha Mittal’s London pile is nothing compared to what the steel magnate and his wife are building on their 340-acre estate in Surrey. In the leafy surrounds of Alderbrook Park, near Cranleigh, is fast rising an eco-mansion crowned with a pair of tapering stupas, beyond which the 2012 pavilion now nestles, its circular steel roof shimmering next to an ornamental lake.

“We haven’t had a chance to use it much yet because of all the building work,” Usha Mittal tells me. “But when everything is finished I think it will be a very peaceful place to meditate or read a book.”

She was attracted to the design, which takes the form of an excavated dell, lined with cork steps and topped with a circular reflecting pool, because “it has a very serene atmosphere and an almost oriental feeling”, and they already owned some of Ai’s vases. But she admits it is hard to maintain in the English climate: the water pool gets coloured and the cork gets a bit musty after rain. The pavilion will be open to the public by appointment, she says, as part of the Royal Academy’s Ai Weiwei exhibition later in the year.

So have they set their sights on acquiring any more pavilions? This year’s structure, a psychedelic chrysalis by Spanish architects Selgas Cano, has already been sold to another anonymous buyer. “It wasn’t us,” says Mittal, with a chuckle. “I think one is enough.”

Julia Peyton-Jones on 15 years of selling the Serpentine pavilions

In the early days, people used to walk into the gallery and say: “I’m going to buy the pavilion.” Which was quite frustrating – because you could bet your bottom dollar those were the people that never would.

The people who buy the pavilions do so in enormously good faith. They need to have a lot of land, as well as the ability to pay for dismantling the structure, moving it and resurrecting it, as well as fulfilling all of the statutory requirements of planning permission. There was someone who was desperate to buy the Niemeyer pavilion [in 2003] for a site in the south of France, but all their discussions with the mayor indicated they wouldn’t get planning permission, so they didn’t.

Knight Frank were very important in the early days [the gallery stopped using them four years ago], dealing with the contractual side of things, and the whole discussion of “will you, won’t you, how much?” More recently, the whole business has settled down. People now buy the pavilion before it has even been built.

The model was established from the first year: the idea that there was a legacy, that the things should not disappear, but have a life ahead of them. The Libeskind pavilion [in 2001] was conceived as a flat-pack, which could have been made as an edition – but no more buyers ever came forward, so the idea never played out. The pavilion project is predicated on the exhibition model, rather than the architecture model, so several people could buy the rights to rebuild a pavilion.

All the architects know the pavilion will move, but it has never been designed with another site in mind. We obviously prefer the buildings to be on public view, rather than being kept in storage, but sometimes the time just isn’t right to show them. We were once approached by someone who wanted to do an exhibition of all the pavilions and travel it around the world – but the sums involved were too enormous. I remember as a child being told the story of the American who bought the old London Bridge and removed it bit by bit to reinstall it in America. We like to think the pavilions explore this idea of temporariness and permanence, with each building having an ongoing afterlife in a very different way. Interview by Oliver Wainwright.