This will be the biggest Guston exhibition in the England since the Royal Academy show back in 2004 and it promises to be a museum-quality survey of this seminal American artist. Guston’s practice was incredibly diverse and this show re-evaluates him as a powerful socio political commentator, at a time when American artists seemed to be avoiding politics as a subject matter altogether.

Timothy Taylor Gallery  gathers together some of the artist’s finest paintings and drawings from the distinguished body of work made between 1969 and 1980, many of which have not been previously exhibited in Europe. 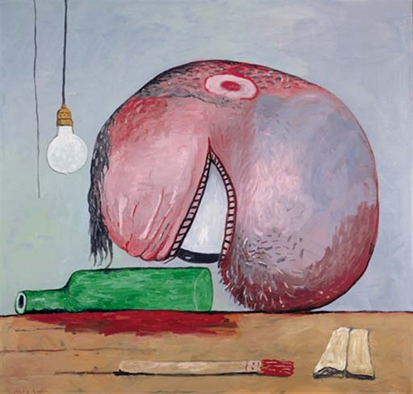 The influence of Guston’s work, in particular his late paintings, continues to “cast a long shadow over the current landscape of contemporary art,” as Peter Benson Miller acknowledges in his recent publication.1 Because Guston was one of the few American painters to ‘defect’ to Europe – both by undertaking numerous residencies, as well as departing from the quintessential Postwar ‘American style’ – his significance is especially pertinent within a contemporary European context. Guston not only effected key artists from a generation of (predominantly German) expressionist painters in the 1990s, but continues to have far reaching influence today, including younger artists in the gallery’s own stable, such as Jessica Jackson Hutchins, Volker Hüller and Eddie Martinez. Furthermore, it is timely to re-consider the provocative nature of Guston’s comic-influenced figuration. Guston’s work first came to prominence in the 1950s, by which time he was an important member of the Abstract Expressionists. 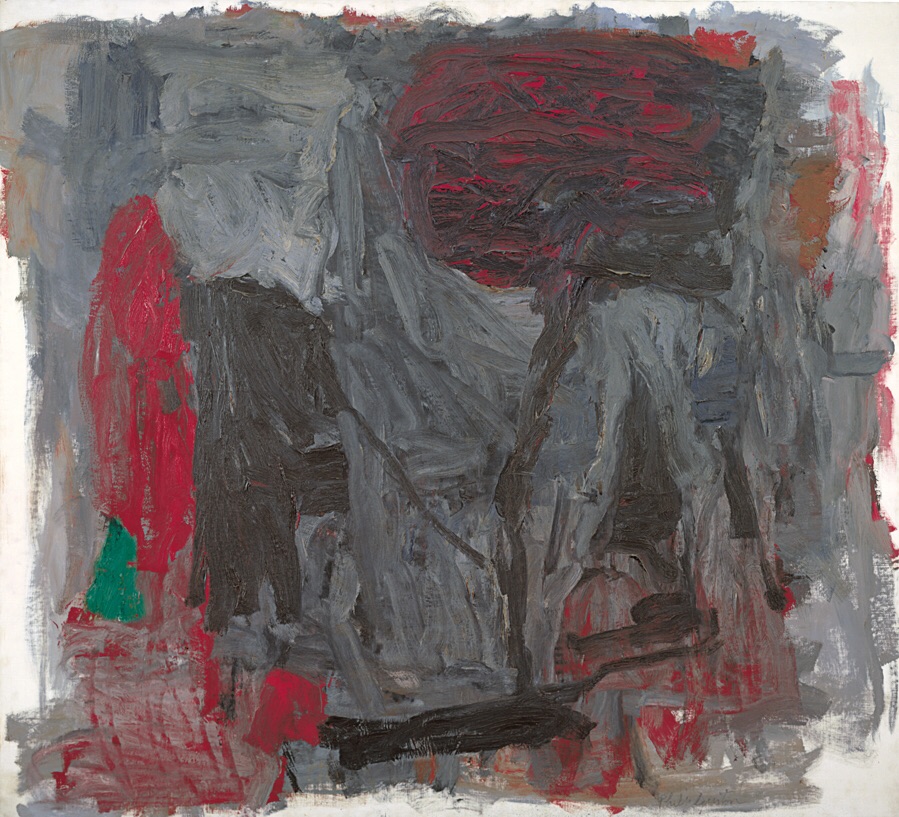 His enquiries into the fundamentals of painting: the importance of the brush stroke and of compositional structure, are viewed retrospectively as his most important contributions to the movement. The only abstract painting included in this exhibition, Traveler III (1960) forms part of a group of works that mark a transition towards paintings with a more sombre and ominous quality. During the late 1960s, Guston became frustrated with the limitations of abstraction and returned to figurative painting, amassing a potent language of motifs whose roots can be seen in the forms and shapes of Traveler III, and illustrating what Christoph Schreier refers to as subcutaneous figuration.2 Following his 1966 exhibition at the Jewish Museum in New York, Guston relocated to Woodstock, New York, embarking on what would become a two-year hiatus from painting. During this time he produced endless drawings of the detritus of everyday life. On his return to painting in 1968, these kettles, clocks, shoes, light bulbs and books had entered into his visual language, becoming pivotal elements of his vocabulary of compressed symbols, which would come to define the work of his later life and are exemplified by a number of works in this exhibition. From 1968 onwards Guston repeatedly returned to his famous hooded figure in a number of paintings often named the ‘KKK series’. Considering himself a quasi film director, Guston used painting as a tool to develop characters. However his narrative process also extended to the inanimate objects he depicted. Eventually these objects would replace the hooded characters as the main anthropomorphic element of his work, with Guston contending that relationships based on metaphor and discourse existed between all elements, even between two lines. 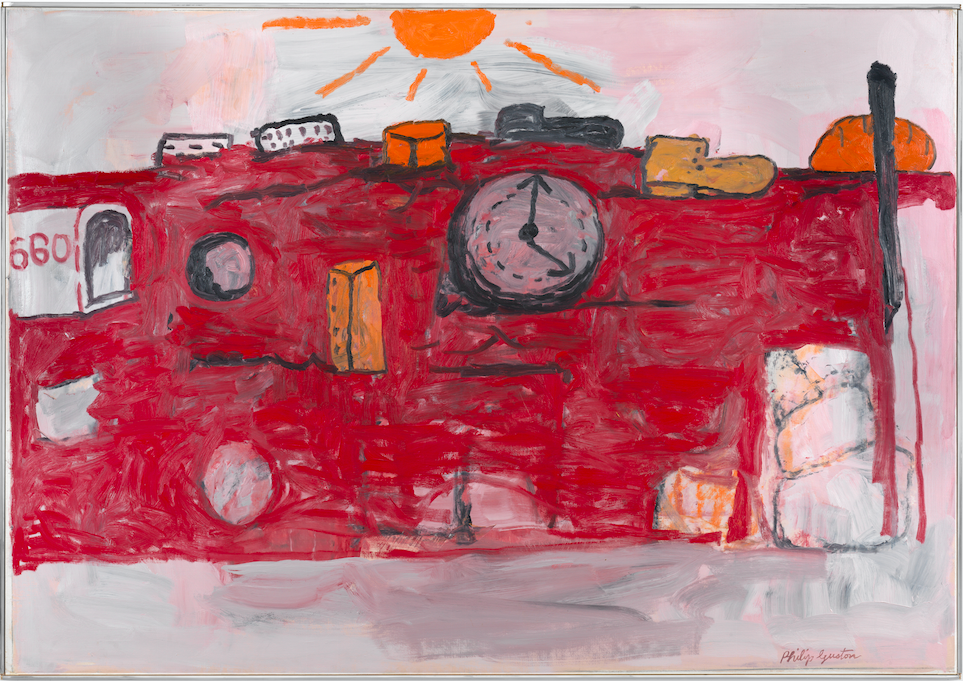 The Hill (1971), one of the most significant works in this exhibition, sits at the centre of this pivotal creative epoch, and the absence of the hooded figure is hinted at through the presence of the shoe, the clock, the mailbox, the bread loaf and the knife. In Head and Bottle (1975) – exhibited here in the UK for the first time – we see the hooded figure replaced with a head, which for Guston acted as a cipher for the artist himself and the people close to him. During his feverishly productive final decade, Guston continued to explore how he might achieve the ‘wholeness’ between thought and feeling that he remembered experiencing as a child. Body parts and objects were assembled on the canvas in non- hierarchical structures that sought to articulate the absolute essence of painting and reconcile it with his fears for what he saw to be a brutal, degenerating world. Guston’s work is intensely personal yet universally relevant, championed within his own lifetime, and growing in stature and influence since his death.

About The Artist
Born in 1913 in Canada of Ukrainian-Jewish parentage, Guston and his family moved to America while he was still a child. The persecution of his parents in their homeland, the Ku Klux Klan activities they witnessed in California and his father’s suicide were all absorbed into his developing artistic practice, emerging as powerful motifs in his late, signature canvases.

In 1927, Guston enrolled at the Los Angeles Manual Arts High School and later the Otis Arts Institute, at the same time producing public murals which demonstrated both his love of Mexican muralism, and his strong political and social conscience. In 1936, he moved to New York where he developed his interest in philosophy, poetry and the work of the Renaissance painters. He also held teaching posts at, among others, the New York University and the Pratt Institute.

Guston’s work first came to prominence in the 1950s, by which time he was an important member of the Abstract Expressionists. His enquiries into the fundamentals of painting: the importance of the brush stroke and compositional structure are viewed retrospectively as his most important contribution to the movement.

During the late sixties, Guston became frustrated with the limitations of abstraction and returned to painting figuratively, amassing a potent language of motifs influenced in style by comic book artists such as Robert Crumb and George Herriman, and in content by personal and political concerns. The first exhibition of these works opened in 1970 at the Marlborough Gallery in and was publicly and critically savaged, causing the artist to leave New York for Woodstock where he remained until his death in 1980.

During this last decade, Guston continued to explore how he might achieve the ‘wholeness’ between thought and feeling that he remembered experiencing as a child. Klansmen, nooses, bricks and a single illuminated light bulb were assembled on the canvas in non-hierarchical structures that sought to articulate the absolute essence of painting, its very origins, and his fears for what he saw to be a brutal, degenerating world. Intensely personal yet universally relevant, his work gradually became sought after, championed within his own lifetime, and growing in stature and influence since his death. 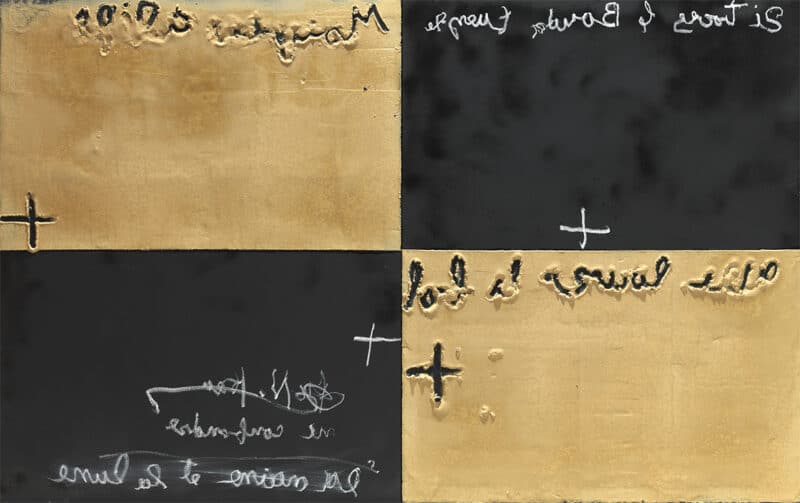 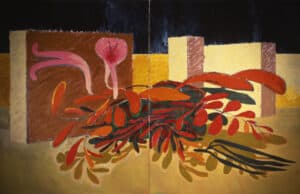