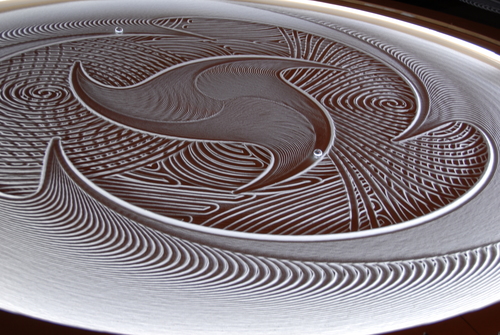 For the crime of cheating death, Sisyphus must push his boulder up the mountain only to have it roll back down each day. For all eternity.

Artist Bruce Shapiro has invented a kinetic machine that creates beautiful designs with sand.
The “Sisyphus,” uses strong magnets to pull metal balls across a layer of sand to produce intricately detailed mandalas. The machine’s constant movement enables it to produce an infinite amount of patterns consisting of fine zigzags and undulating lines, all of which are completely symmetrical.

“Motion Control” is an industry term for computer-controlled movement in applications like robotics and CNC. This technology has revolutionized industrial production and design, but until recently was extremely expensive and complex.

Bruce Shapiro has spent the past 25 years dedicated to exploring motion control as a new medium for artistic expression, building CNC art tools and kinetic sculpture that combine his love of art, science and education. 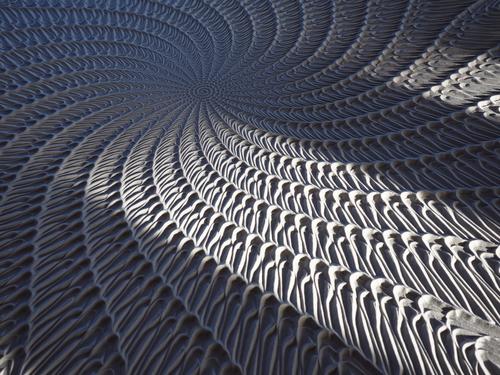 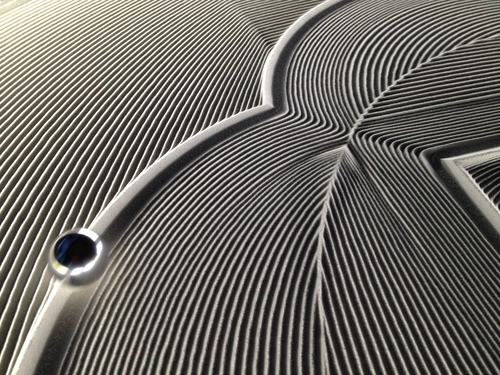 About The Artist
I grew up enchanted by music, electronics, and making things. I pursued a career in medicine and spent several years as a practicing physician. My childhood interests in building were rekindled when I first brought home a 286 computer and discovered I could use it to control motors from discarded floppy drives.

My first attempt to share my “mastery” over this rapidly evolving industrial technology, was a fiasco: I assembled 10-20 family members, friends, and pets into my basement shop, and made them watch two stepper motors sitting on a table, faithfully rotating “flags” of tape stuck to their shafts.

EggBot (1990), my first art robot, was created out of necessity (to convince others I wasn’t completely losing my mind). Since then I have devoted myself to using motion control for making art and education tools. My work has appeared in temporary and traveling shows, and is permanently installed in the US, Canada, Europe, and Australia.

REVIEW: George Rickey: The Other Founder of Kinetic Art Opens at Marlborough