Ryoji Ikeda’s ‘supersymmetry’ blurs the lines between art, music and particle physics in a complex and disorientating installation, which may actually necessitate a PHD to fully understand. 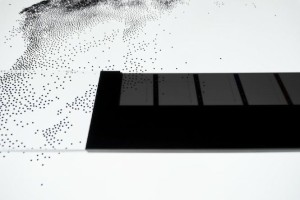 ‘supersymmetry’ marks a year of site specific installations, at the top of the Brewer St. multi story car park, curated by the indefatigable Vinyl Factory in collaboration with leading contemporary artists. Previous collaborators have included Richard Mosse, Dinos Chapman and Conrad Shawcross and each project has gone a step further to solidify Vinyl Factory as one of the leading audiovisual innovators in contemporary art.

VF have been responsible for some of the most interesting artistic, audiovisual offerings of recent years and don’t seem to show any signs of slowing down. Established in 2001 VF have firmly stuck their fingers in all sorts of proverbial pies.  They are behind, Soho staple, Phonica Records and Fact magazine, have produced their very own mobile vinyl pressing plant (which was showcased earlier this year for Christian Marclay’s show at Whitecube Bermondsey) and now the series of installations at the Brewer Street car park, which have become progressively convoluted and intellectually challenging.

Ryoji Ikeda has worked, for the last four decades, on unimaginably complicated projects exploring the nature and characteristics of sound. He has recently completed a residency at CERN, the world’s largest particle physics research institute and home of the Hadron Collider, as well as exhibiting and performing his mind boggling feats of audiovisual prowess in some of the worlds leading galleries and auditoriums. 2014’s ‘Spectra’ saw the artist illuminating London’s night sky with magnificent towers of light, over four days, marking the centenary of the First World War. 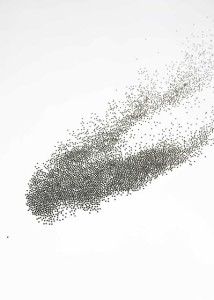 ‘supersymmetry’ is an installation version of ‘superposition’ – vast visually breathtaking musical stage performances examining a sort of ‘yes & no’ system of recording how particles behave.

The installation consists of two large, pitch black rooms each emitting screeching reverberations. The first room houses 1m by 1m light boxes containing microscopic ball-bearings, which dart around in random patterns depending on the subtle manipulations of each box. At points they will individually race around but then seem to develop some control and move in a harmonious group. The two rooms work as a sort of question and answer or ‘yes & no’ and as the first room blurts out the question the second room begins to create the answer.

The second room comprises two 20m by 0.7m horizontal video screens arranged in parallel on left and right with two long rows of 20 monitors. The information garnered from room one is analysed  and interpreted in to different sounds and imagery making the process a constant and continually changing phenomena. The sound and graphics dart across the screens knocking you off your feet then morph into something far more clinical. Imagery which one would perhaps associate far more heavily with data collection and analysis are represented with random lines of code and grid formations rushing down the screens as blinding light exudes across the length of the room. 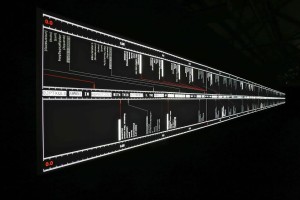 Although Ikeda’s work could be interpreted as being nauseatingly scientific and alienating to anyone without an interest in particle physics the beauty lies within the understanding that this is just a guy who wants to figure stuff out. An artist who is aware that these subjects can be a complete head f@%k but is trying to display them in such a way that the viewer is blown away by sight and sound and at the same time can grasp a basic understanding of his plight.

The show runs until the 31st May so this is it’s final weekend.  All other info is HERE

All images courtesy of Vinyl Factory