Turner-Prize nominated artist James Richards has selected Francis Bacon’s Study for a Portrait (1953) for this fourth and final presentation of works from the V-A-C collection, Moscow to be shown at the Whitechapel Gallery.

James has composed a new sound work for the display, which will be played throughout the newly redesigned gallery space, that has been carpeted and draped in curtains to create a dramatic atmosphere in which to present Francis Bacon. 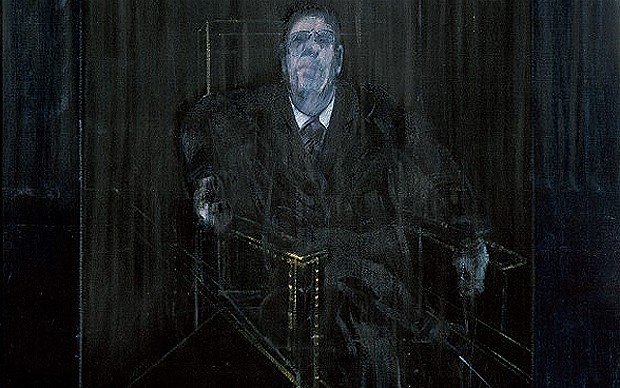 This major work from the V-A-C collection by Francis Bacon depicts an unknown, suited man sitting on a grand armchair evocative of a Papal throne, set against a midnight blue backdrop. One of the last works painted in his studio at the Royal College of Art, this unique work by the artist pre-dates his 1954 Man in Blue paintings.

“Having curated exhibitions in the past, I wanted to look at the most impactful way of presenting just one iconic work rather than putting together a more traditional group show. I was then interested in devising a layer of accompanying sound for the room in which the painting is hung, rather than a soundtrack to the painting or reference to the painting’s content, which acts as a kind of sonic filter for the work.”

James Richards (b. 1983, Cardiff) is a video artist has used sounds from various sources, such as late night radio and his own field recordings and musical arrangements to build suspense in his work. For this presentation at the Whitechapel Gallery, Richards has created a new composition by layering human voices with electronic, rhythmic sounds played through a multi-channel sound installation. He worked with a group of singers who can be heard inhaling and pausing before breaking into song. The artist also uses the echoing sound of church bells to fill the gallery with ambient sound and create a unique visual and audio environment for the painting.

This exhibition highlights the V-A-C collection, Moscow, as part of the Whitechapel Gallery’s programme of opening up rarely seen collections from around the world, supported by Hiscox. The series of four displays, which began in September 2014, are shown in a dedicated Collections Gallery. This final exhibition from the collection selected by James Richards (23 June – 30 August 2015) follows three previous displays selected by Mike Nelson (9 September – 30 November 2014), Fiona Banner (9 December 2014 – 8 March 2015) and Lynette Yiadom-Boakye (17 March – 14 June 2015). Each presentation is accompanied by a publication devised by the artist selector.

For over a century the Whitechapel Gallery has premiered world class artists from modern masters such as Pablo Picasso, Jackson Pollock, Mark Rothko and Frida Kahlo to contemporaries such as Sophie Calle, Lucian Freud, Gilbert & George and Mark Wallinger. With beautiful galleries, exhibitions, artist commissions, collection displays, historic archives, education resources, inspiring art courses, dining room and bookshop, the Gallery is open all year round, so there is always something free to see. It is a touchstone for contemporary art internationally, plays a central role in London’s cultural landscape and is pivotal to the continued growth of the world’s most vibrant contemporary art quarter. The Gallery does not own a Collection, but has a dedicated gallery for opening up public and private collections, including five displays from the British Council Collection from April 2009 – May 2010; four displays from The D. Daskalopoulos Collection, Greece, from June 2010 – May 2011; five displays from the Government Art Collection, from June 2011 – September 2012; four displays from the Collection Sandretto Re Rebaudengo from September 2012 – September 2013; and four displays drawn from member museums of the Contemporary Art Society from September 2013 – August 2014.

V-A-C Foundation is a not-for-profit private institution founded in Moscow in 2009 by Leonid Mikhelson (Founder and President) and Teresa Iaricci Mavica (Director). Committed to supporting contemporary art in Russia, the V-A-C Foundation focuses on contemporary art and cultural practice and aims to provide a platform for creativity. The foundation strives to be actively engaged in artistic production, rather than the patronage or sponsorship of ongoing artist processes. V-A-C is deeply committed to the growing importance of art made in Russia as well as the new generations of artists from around the world. The V-A-C collection displays are curated by Omar Kholeif, Curator, Whitechapel Gallery with Habda Rashid, Assistant Curator, Whitechapel Gallery.