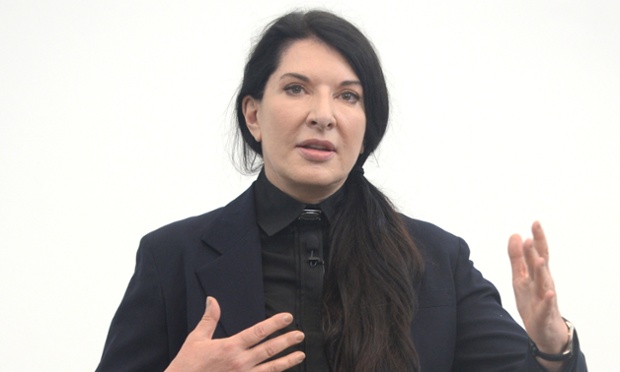 This article titled “Marina Abramovi?: Jay Z ‘completely used me'” was written by Lanre Bakare, for theguardian.com on Tuesday 19th May 2015 22.34 UTC

Marina Abramovi?, the Serbian superstar perfomance artist, has spoken about how she was “used” by Jay Z when the rapper shot a music video for his song Picasso Baby in 2013 while the artist performed her work The Artist Is Present, in which she sat across a table from members of the public and held their gaze.

Related: How I became a convert to the cult of Marina Abramovi?

Speaking to Spike magazine, Abramovi? said that she wasn’t surprised when Jay Z said he wanted to adapt her work, but after the rapper came in to shoot the video at MoMA, where the exhibition took place, she felt the experience only benefited him.

“The day before, he came to my office and I gave him an entire PowerPoint presentation and said: OK, you can help me, because I really need help to build this thing,” she said.

“Then he just completely used me. And that wasn’t fair. This is very different from Lady Gaga, for example, who has done great work for me. Just by having 45 million followers, she brought all these young kids into my public.”

After the video was released, some in the art world declared it “the day that performance art died”, while others pointed to the history of contemporary artists working with musicians including Ai Weiwei’s version of Psy’s Gangnam Style and Richard Hamilton’s work with the Beatles.

For his video, Jay Z riffed on Abramovi?’s work – sitting opposite a string of celebrities including Jim Jarumusch and Adam Driver.

Abramovi? said that she didn’t regret the decision to work with the rapper but she said the experience would make her think again about similar projects in the future.

“In the end it was only a one-way transaction. I will never do it again, that I can say. Never,” she said.

“I was really naive in this kind of world. It was really new to me, and I had no idea that this would happen. It’s so cruel, it’s incredible. I will stay away from it for sure.”

Abramovi? is soon to arrive for two major shows in Australia where she’s been described as being “like the Beatles” because of the reaction from her fans.