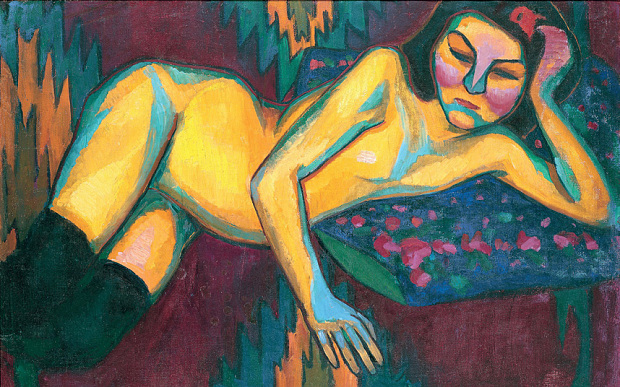 I must admit that Sonia Delaunay was not an artist I was familiar with so I entered this exhibition not knowing what to expect. Her early figurative work seemed fairly innocuous, except for the yellow nude (pictured above), with it’s striking contrast in colour it cuts a confident and powerful figure.

As she moved into the abstract her works became even stronger and there are several energetic works here, featuring flamenco singers and an orange seller. The electric prisms work almost sings with vibrancy and its easy to get sucked into it.

Delaunay then moved into fashion and textiles and this is where her work takes a turn for the worse as it feels like her creativity was hampered. With the exception of a pair of shoes, all of these items feel like toned down versions of her paintings.

But then we’re bounced back into her brilliance with a room of three paintings for the 1937 Paris exhibition. These works of a propeller, an engine and an instrument panel are overwhelming in their colour and scale – they are easily the best works in this exhibition.

The show fizzles out with her later works which lack the urgency of her earlier paintings, perhaps reflecting a calming that comes with age. Nevertheless the early works in this show are enough to make this a great exhibition where colour comes alive.

Sonia Delaunay is on at Tate Modern until 9 August.