On entering Maria Stenfors gallery you are instantly unsteadied by a dissonantly aggressive glimpse into the brain of Norbert Delman. 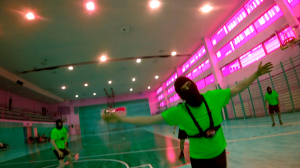 A video of a dramatically combative game of basketball plays behind a mesh fence which feels like it should be protecting the viewer from some kind of violent encounter. All the players in the game are masked and wearing the same colours, which, on talking to the artist, is a representation of the necessary but unnerving struggle to achieve and maintain success. 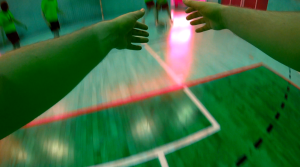 Delman is extremely motivated by a compelling drive to succeed – embracing the hard working stereotype thrust upon him by his Polish heritage. He say’s “I didn’t want to be an artist I had to be and the biggest drive for me is the fear of not being a success”. The work serves as an insight into the increasingly competitive and chaotic existence faced by Delman’s generation. A generation which is saturated with choice but also constricted by the restraints constructed by the horrors of modern society.

Saccharin colours and graphics are the back drop to a hugely muscular arm adorned with veins spelling out the word ‘BRUTAL’ while a woman violently licks a screen, attached to it, in some twisted form of adoration. It is made with a crude intent which heightens the anarchic atmosphere built  by the hostile environment. Fear plays a huge part in Delman’s work. Whether it be fear of success or a fear of failure, anxieties about body image or social standing – they all amalgamate in to a beautiful ball of disarray which manifests itself as thoughtful and well executed works of art. 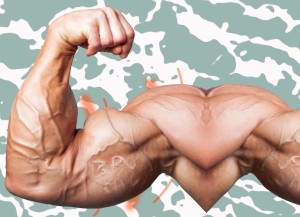 It’s stimulating to encounter a young artist embracing the negative and building something fascinatingly positive out of it. Confronting subjects that would perhaps not be as fashionable with his contemporaries in a show that is designed to smack you in the mouth. There is a definite harsh reality to the work but it’s presented in a fantastically humorous way.