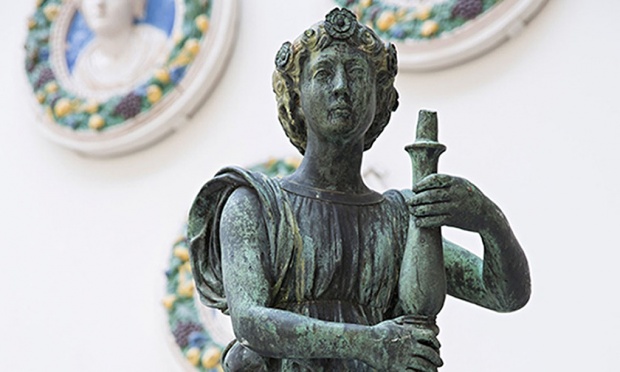 The V&A museum has raised £5m to buy the four bronze angels originally made for the tomb of Cardinal Thomas Wolsey, who was planning a burial place of royal splendour for himself years before he died. They were appropriated with most of the rest of his property by his former friend and confidant Henry VIII, when the clergyman fell from grace over his failure to win an annulment for the king from his first wife, Catherine of Aragon.

The angels survived when so much of the metalwork of the period was melted down, partly because they vanished into obscurity. They were ultimately used as gate post decorations at Harrowden Hall, a mansion in Northamptonshire which is now part of a golf club.

The author Hilary Mantel, whose Booker-winning Wolf Hall, currently being adapted by the BBC, chronicles the collapse in the relationship between the two men, backed the public appeal for the museum to acquire the angels, which were made for Wolsey in 1524 by the Italian master metalworker Benedetto da Rovezzano.

“The recovery of Wolsey’s angels is one of those miracles that historians pray for; something that seems irrevocably but lost has been there all the time. To claim the angels for the nation would connect us to one of the liveliest eras of our history and one of its most remarkable men,” she said.

Wolsey was preparing for a sumptuous tomb at Westminster Abbey years before his death in 1530, by then in disgrace and on his way to face charges of treason. He was buried comparatively modestly in Leicester, and the site of his grave is now lost in the ruins of the abbey not far from where the bones of Richard III were rediscovered.

Henry took the angels along with the fortune in money and works of art accumulated by the cardinal, including his palatial home at Hampton Court.

The king intended them for his own tomb, but that was never entirely completed either by Henry or by his children. Elizabeth I brought parts of the tomb and the metalwork to Windsor, and most of it was sold off during the civil war. The black stone coffin is now in St Paul’s cathedral and occupied by Admiral Lord Horatio Nelson.

The metre-tall angels, originally designed to stand on tall poles guarding the tomb, were believed long since destroyed until two of them turned up at auction in 1994, described as “Italian renaissance style”, and were acquired by a Parisian art dealer. It was only later scholarship that proved they had been stolen from the country house, matched them to the remaining pair, and identified their true extraordinary history. The giant gilt bronze candlesticks, which were made for Henry to light his tomb and the angels, also survived and are now in St Bavo cathedral in Ghent.

The V&A, whose director Martin Roth described the angels as “a vital part of our national history”, raised the sum through thousands of individual donations from the public, as well as £2m from the National Heritage Memorial Fund, and £500,000 from the Art Fund charity.

Stephen Deuchar, director of the Art Fund, said: “The unexpected opportunity to reunite and display these four beautiful works of sculpture, so intimately connected with the course of British history, could not be overlooked.”

The angels have been on display at the museum during the fundraising campaign, but need to be restored to their original appearance, before they go back on public display.