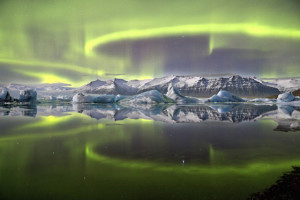 A vivid green overheaded aurrora pictured in Iceland’s Vatnajokull National Park reflected almost symetrically in Jokulsrlon Glacier lagoon. A complete lack of wind and currrent combin in this sheltred lagoon scene to crete an arresting mirror effect giving the image a sensation of utter stillness. Despite theis there is motion on a suprising scale, as the loops and arcs of the aurora are shaped by the shifting forces of the Earth’s magnetic field.