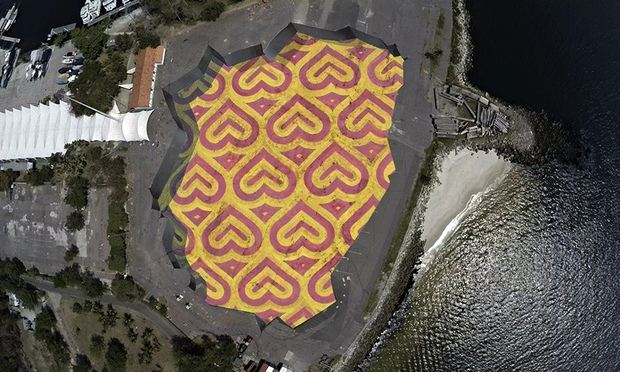 So where is art headed in the digital age? Can we see the future yet?

We must be experiencing the fastest rate of technological change in human history. The industrial revolution was a meandering process compared with today’s acceleration. And because communication is at the heart of this historical leap, it instantly and constantly creates new opportunities and challenges for artists.

Take “gif art”. The technology behind gifs – which stands for graphic interchange format – has been around since 1987. It allows brief pieces of animation to be easily shared online. And it’s now become a hugely popular “art form”.

Cartoon dogs, flying babies, op art abstractions – all are being touted as the latest cool art in gif form.

Now the British street artist (virtual street artist?) Insa, who specialises in gif-iti, has made media waves by creating “the world’s largest gif” in Brazil. He has painted a repetitive horizontal graphic image large enough to be seen from space, which was filmed over two days from a satellite to create an animated gif. It seems inaccurate to call the gif gigantic. Rather the process of making it involved a colossal image.

Whatever, the real record here is for the World’s Daftest Hyping of Digital Art. The giant cosmic gif was sponsored by a drinks company and has the feeling of a contrived publicity stunt invented by marketing folk. This is the kind of bollocks PR companies think is art. It was this or another vodka-fountain ice sculpture.

But I haven’t the heart to get too angry about gif-iti. The amazing opportunities offered by new technology are hardly something artists can or should ignore. If you get sick of all the endless hype for silly animated gifs and other online “art” – the quotation marks really are required for a lot of this stuff – just close your eyes and think of David Hockney.

No artist has been quicker or more successful than Hockney in using digital media. His iPad drawings are joyous responses to a new medium. Are they masterpieces? That’s not the point. Hockney is a real artist whose craft skills are beyond doubt. It is therefore fascinating that he finds the iPad such a useful instrument.

It is natural that visually gifted young artists today will take this veteran’s lead and want to draw on a screen as well as on paper, to play about with gifs and experiment in gif-iti. Where will this lead? Somewhere totally new. The art of this century is headed into uncharted territories that will have as little to do with Turner-prize conceptualism as with traditional painting.

At the moment, the technology defines what is possible, and gif art is more interesting for how it is made than for what people are making. But one day a real artist will follow in the footsteps of today’s pioneers and create a digital masterpiece that is profound and true. That day will be sooner that we think – and worth the hype.