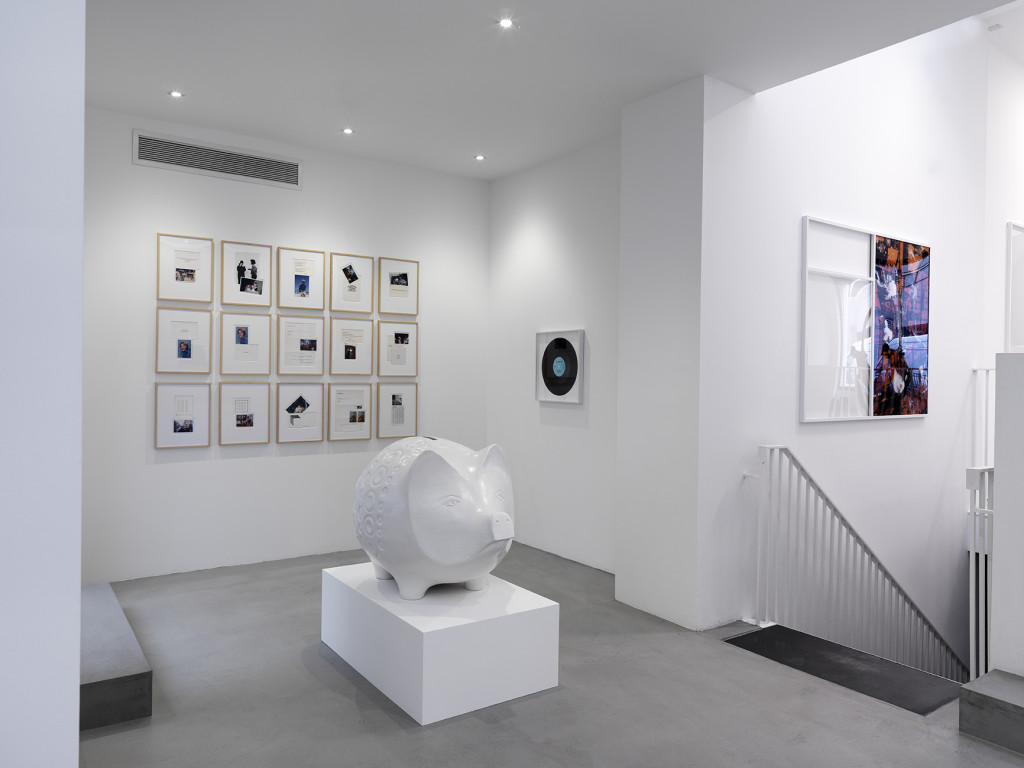 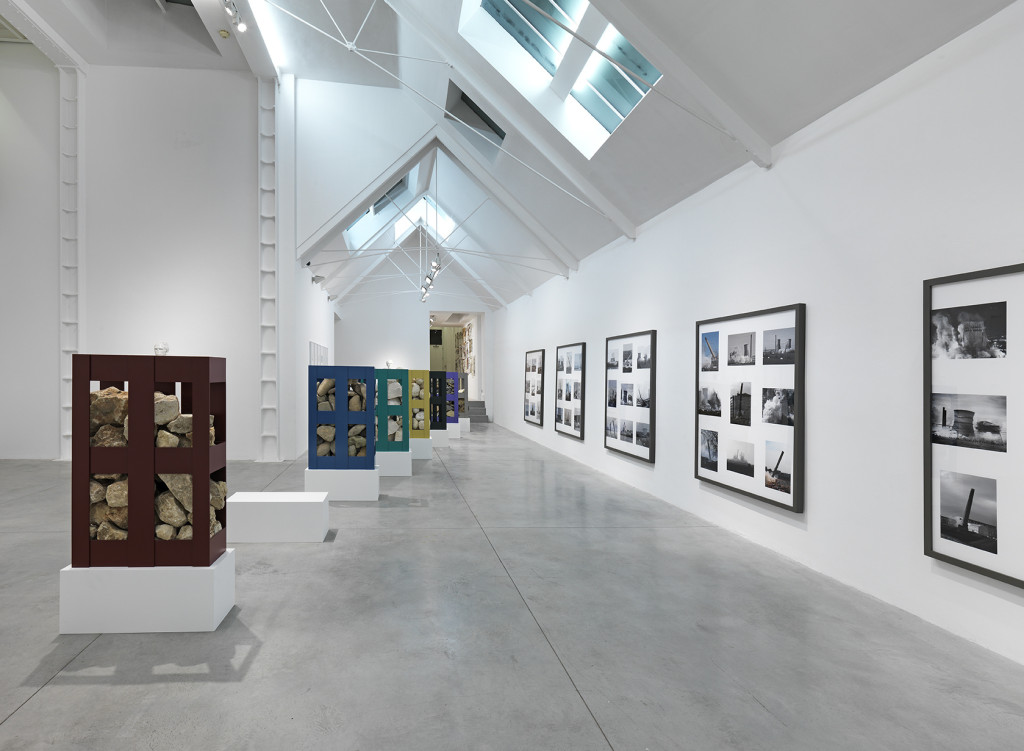 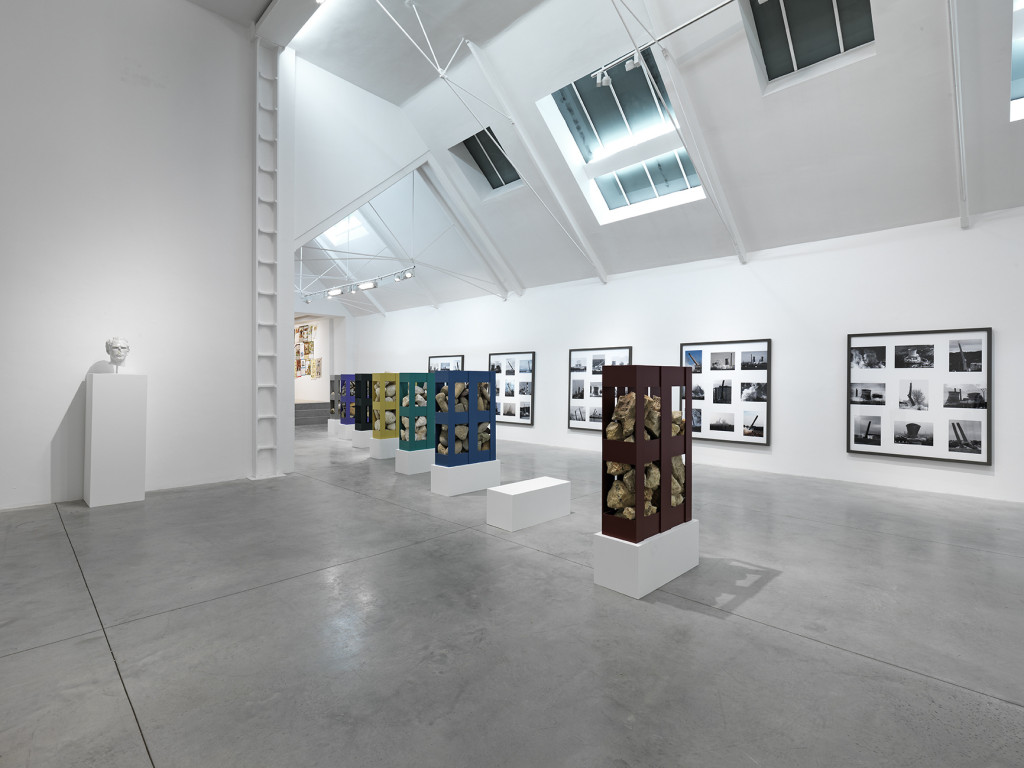 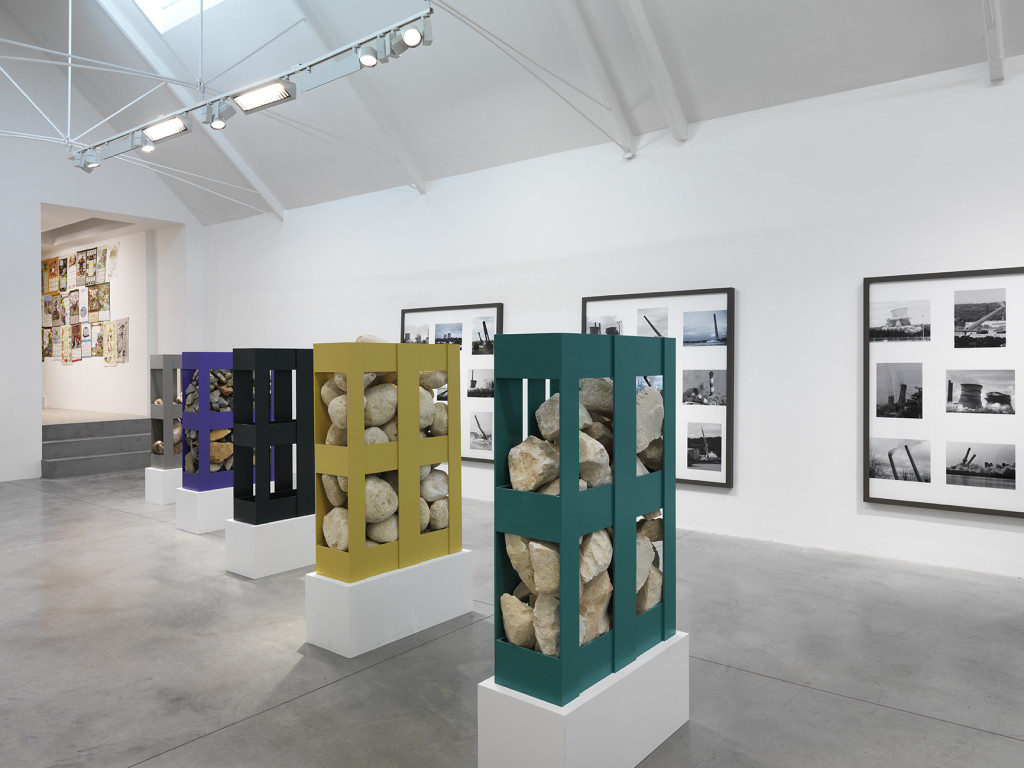 For his sixth solo exhibition at Lisson Gallery, Jonathan Monk revisits narratives drawn from his own biography and transforms historical works by artists that have also proved to be personal, formative influences. A new wall-hung assemblage of stitched-together souvenir tea towels, entitled My Life Within the Lives of Others II (2014), marks every year and indeed every day since his birth so far, with 46 anachronistic cloth calendars showing different species of Australian birds, Swiss chalet exteriors and other kitsch scenes. Fragments of his parents’ 1970s curtain material are rendered in photographic works that return them to framed, window-like settings, despite the fabrics clearly being discarded as drop cloths for subsequent domestic re-decoration. Among the moving portraits of Monk’s family is a slideshow that magnifies one image of them 80 times over, through which the artist is reflected in his child’s gaze – as titled, Monk is literally Searching for My Father in My Sister’s Eyes (2002) – while a series of childhood or holiday snaps, Same Time In A Different Place, are each juxtaposed with a vintage invitation card, for shows by the likes of Dan Graham, Sol LeWitt or On Kawara, sourced from the same date.

In stark contrast to such close-to-home subject matter, Monk has assembled a monumental installation of seven minimalist metal structures, each of these specially-built and coloured-coded pallets containing a shipment of rocks gathered from seven different contested territories in the Middle East: Lebanon, Jordan, Egypt, Palestine, Saudi Arabia, Israel and Syria (although no rocks could be gathered from this last location).

These enclosed tranches of landscape, culturally displaced and geo-politically charged, relate to Land Art exponent Robert Smithson’s Non-Site series, for which he re-displayed earth excavated from specific areas in similar, pallet-shaped sculptural containers within a gallery. Other homages to recent heroes of art history include Blow Up, Monk’s tongue-in-cheek destruction of the photographic work of German couple Bernd and Hilla Becher. Monk mimics their grids of monochromatic studies of industrial architecture, except the cooling towers and gas cylinders are toppling over and imploding in the process of being demolished. 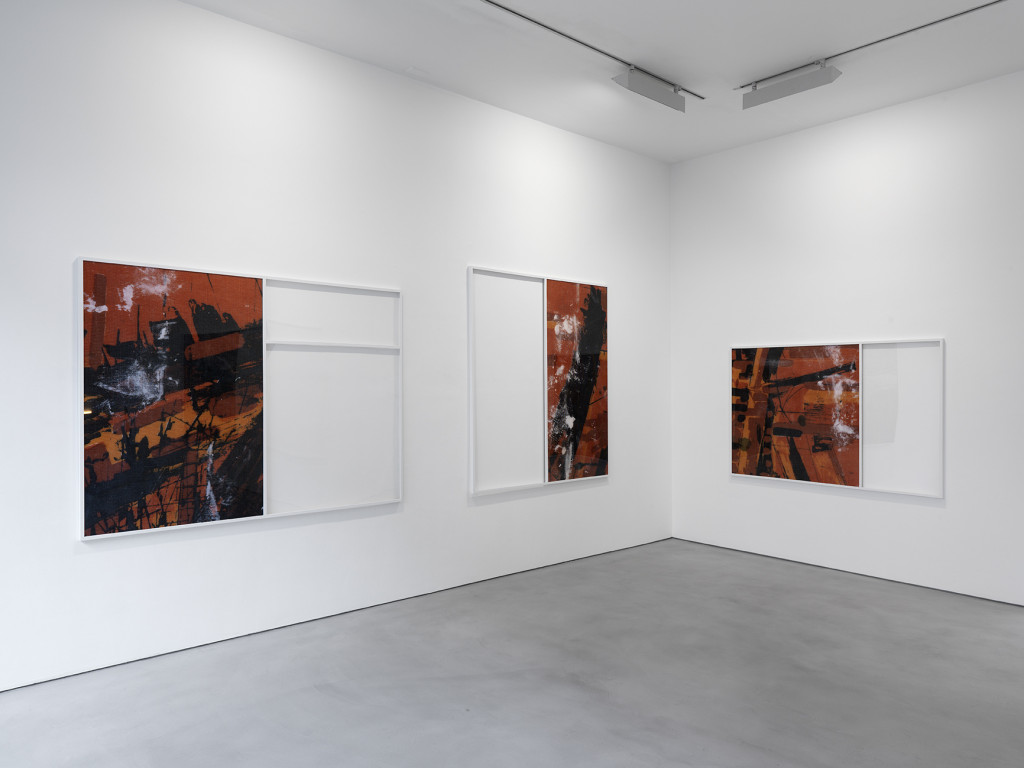 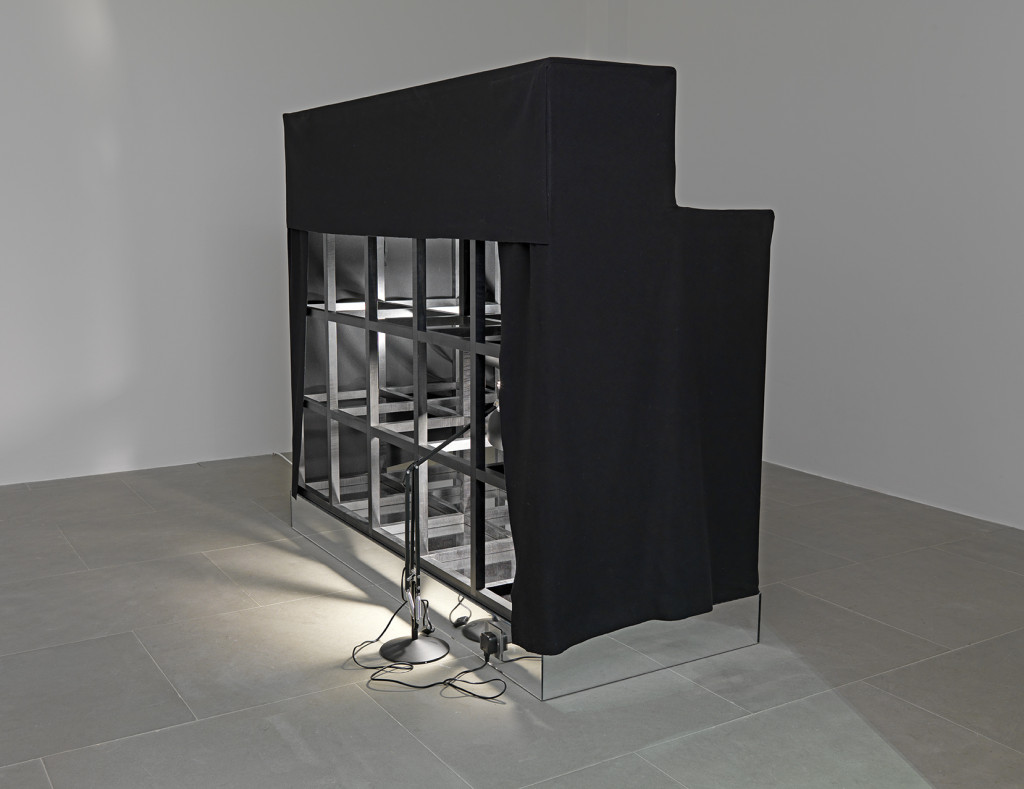 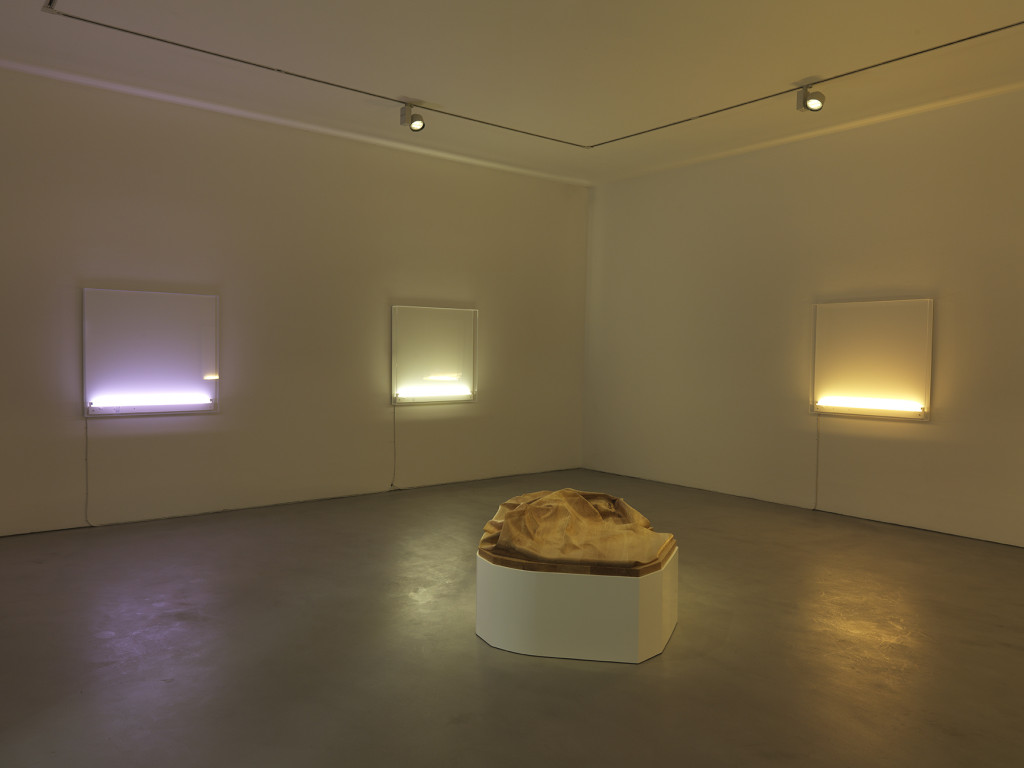 While these two dominant poles of Monk’s practice – his familial inheritance and his art historical inheritance – can seem worlds apart, many pieces weave together both strands. The life-sized, white ceramic Pig (2012) is both a scaled-up version of a piggy bank from his childhood and an imagining of an unrealised sculpture by Jeff Koons, as noted by the American artist as a possible alternative for his famous metallic bunny. Similarly, Monk’s imposing self-portrait busts inspired by idealised Greco-Roman statuary, has each had its nose smited by a famous Italian artist of the Arte Povera generation, such as Jannis Kounellis, Gilberto Zorio or Emilio Prini, as well as by Monk himself.

Throughout the exhibition, Monk’s authentic, artistic authorship variously raises or lowers its head above the parapets, either reaffirming his life’s work or else channelling the work of others. The sight of numerous melancholic objects – a discarded piano cover, carved from wood, or a neon lightbox blinking between life and death – suggests a reflective strand in Monk’s work, both lamenting time past and lauding bygone art historical heydays, especially so in the nostalgic title that references key literary and musical touchstones, I ? 1984.