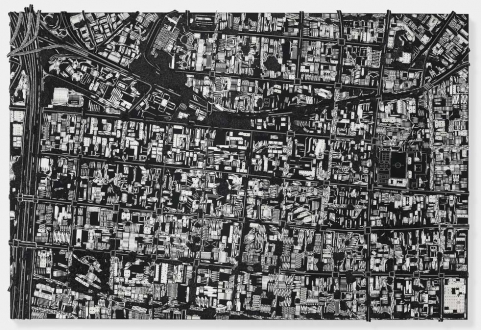 Described by the artist as ‘portraits of living cities’, the ‘Black Scalpel Cityscapes’ are made up of vast numbers of surgical instruments that combine to create bird’s-eye views of urbanised areas from around the world. With the series, Hirst investigates subjects pertaining to the sometimes-disquieting realities of modern life – surveillance, urbanisation, globalisation and the virtual nature of conflict – as well as elements relating to the universal human condition, such as our inability to arrest physical decay. 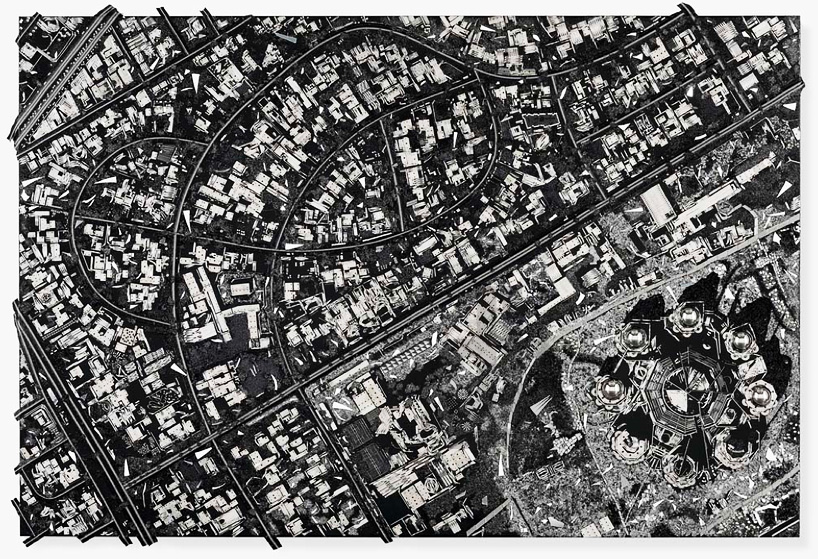 In the paintings, manmade features and natural elements such as buildings, rivers and roads are depicted in scalpels as well as razor blades, hooks, iron filings and safety-pins, all set against black backgrounds. For this exhibition, Hirst selected 17 cities, which are either sites of recent conflict, cities relating to the artist’s own life, or centres of economic, political or religious significance. The selection includes, amongst others, Washington, DC; Rome and the Vatican City; Leeds (where the artist grew up); Beijing; Moscow; New York; and London. Each city’s particular history is written into its geographical spread, showing how it has incrementally grown and developed over the years. The paintings bear witness to Hirst’s trademark technique of patterning, systematic repetition and grids, as used in earlier series including the ‘Spot Paintings’, ‘Colour Charts’, ‘Entomology Cabinets’ and the ‘Kaleidoscope Paintings’. This methodology is essentially an exercise in applying order to chaos, whilst acknowledging that order or control are often concepts that remain impossibly remote in life.

The ‘Black Scalpel Cityscapes’ make reference to the military procedure of ‘surgical bombing’ or ‘surgical strikes’, commonly used in modern warfare, which aims to limit collateral damage by targeting precise areas for destruction. The suggestion of a remote, digital conflict inevitably reduces the tragic and devastating realities of war. In a similarly misleading manner, the perspective of an aerial map minimises the life beneath it to a series of detached systems and patterns of collective existence; recalling the imagery used in the films Powers of Ten (1968, 1977) by Charles and Ray Eames, as well as the compressed, slow motion, time-lapse footage of US towns in Godfrey Reggio’s cult film Koyaanisqatsi (1982) – touchstones in the modern conception of urban living. Hirst’s paintings, therefore, make inevitable allusions to the all-seeing eye, that of surveillance tools such as Google Earth, now used by approximately half a billion people and whose roots are traceable to a 3D mapping application used by US military during the Iraq War.

Hirst has described the steel scalpels, which have recurred in his work since the early ‘90s, as ‘dark but at the same time light’, a reference to the visual appeal of the highly reflective, precision-tooled metal, and the universal fear of the surgeon’s knife. Playing on elements of wordplay surrounding ‘surgical strikes’, Hirst here uses them to dissect not only individual concerns over mortality, but the deep-rooted, society-wide anxieties over surveillance, the digitisation of warfare and the sense of a remote Orwellian order and its imposition on our individuality. 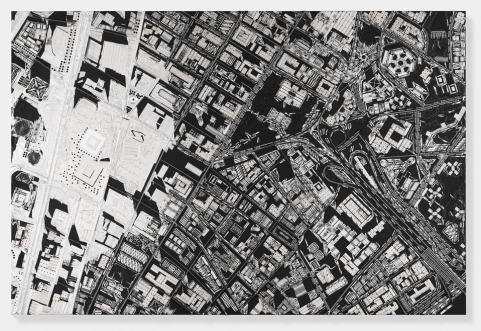 In a film by white cube, Hirst discusses his exhibition and its symbolic significance with Tim Marlow.

About The Artist
Damien Hirst was born in 1965 in Bristol, UK. He lives and works in London and Gloucestershire. Solo exhibitions include ‘Relics’, Al Riwaq: Museum of Islamic Art, Doha (2013); ‘Artists Rooms’, New Art Gallery, Walsall (2012); ‘Cornucopia’, The Oceanographic Museum of Monaco (2010); ‘No Love Lost’, The Wallace Collection, London (2009); ‘Requiem’, Pinchuk Art Centre, Kiev (2009); ‘For the Love of God’, Rijksmuseum, Amsterdam (2008); Astrup Fearnley Museet fur Moderne Kunst, Oslo (2005); Museum of Fine Arts, Boston (2005); and ‘The Agony and the Ecstasy’, Archaeological Museum, Naples (2004). An exhibition of the artist’s private collection, ‘Murderme’, was held at Serpentine Gallery, London in 2006 and in the Pinacoteca Agnelli in Turin, 2012. In 2012, Tate Modern, London held a major retrospective of Hirst’s work to coincide with the London 2012 Cultural Olympiad. He received the DAAD fellowship in Berlin in 1994 and won the Turner Prize in 1995.