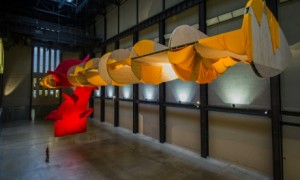 The major London galleries are not immune to the frenzy that is Frieze week and two have combined to bring together an exhibition of works by American poet and sculptor Richard Tuttle. The Whitechapel gallery has a career survey of his work while in Tate Modern’s turbine hall hangs a colossal sculpture.

The turbine hall sculpture resembles a giant glider but an imperfect one at that with coloured cloth hanging off and odd angular projections making it ungainly. Its scale is impressive and it reminded me of Phyllida Barlow’s sculptures over at Tate Britain, but unlike those works this installation lacks any sense of intimacy and therefore doesn’t add much more than its immense size.

Over at Whitechapel, the exhibition concerns itself with Tuttle’s interest in the fact that both text and textile have the same language root and so he has created works from textile and each work is accompanied by a short poem. It’s a novel approach and the two sides of each work do succeed in complimenting each other on most occasions. 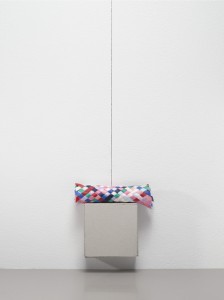 Tuttle’s textile works have a fragility to them and there is something of a scaled down Schwitters to them as they feel like a collaboration of found objects. In one work a fishing fly sits near the floor as a line along the wall reaches to the ceiling while upstairs a ball of metal and string creates coloured shadows along the wall as coloured spotlights reflect off it. These are the two works we found aesthetically impressive as the rest of the work is rather abstract and conceptual in nature.

While abstract and conceptual art are no bad things, there is a lack of contextual information throughout this exhibition that makes the work very inaccessible and I left this show underwhelmed and uninformed. The Whitechapel gallery has committed this error repeatedly, cases in point are the Hannah Hoch and Chris Marker exhibitions. For a gallery that targets a large public footfall including those who aren’t necessarily part of the art world that’s an unacceptable mistake. 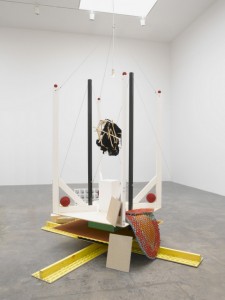 Tuttle’s use of material mixed with poetry holds the interest somewhat while in the exhibition, but it never delivers anything memorable and feels decidedly average.

Richard Tuttle: I don’t know. The Weave of Textile Language is on at Whitechapel gallery until 14 December and Tate Modern turbine hall until 6 April 2015.