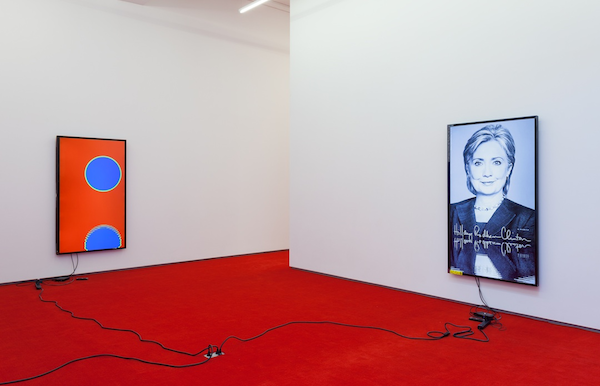 Team (gallery, inc.) is pleased to announce a solo show of new work by Cory Arcangel. Entitled tl;dr, the exhibition will run from 07 September through 26 October 2014. Team is located at 47 Wooster Street, between Grand and Broome. Concurrently, our 83 Grand Street space will house a one-person show by Ryan McGinley. On 17 September, we will inaugurate a Los Angeles project space with an additional show by Arcangel, also titled tl;dr. 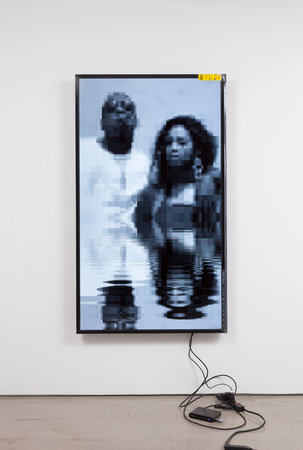 For this New York exhibition, Arcangel has produced a body of work expanding upon his use of cultural and technological obsolescence as the source of an artistic vocabulary. In the gallery, he will be showing a series of works called Lakes. These sculptures consist of flat-screen televisions turned on their sides, displaying images taken from pop culture to which the artist has applied the Java applet “lake,” which creates a shimmering, seemingly liquid reflection along a horizontal axis. The effect is familiar but dated: something seen regularly on personal websites of the late 90’s but rarely since. These works explore a tension in societal attitudes towards the preservation of culture: the obsessiveness with which we conserve and narrativize visual art and popular culture, yet dismiss technology as somehow adversarial to art and art-making. Arcangel’s works exist neither to elevate the “lowbrow” subject matter they mine nor lampoon their Fine Art context, instead experimenting with the marriage of the two, exploring what their synthesis might do for – or to – one another. 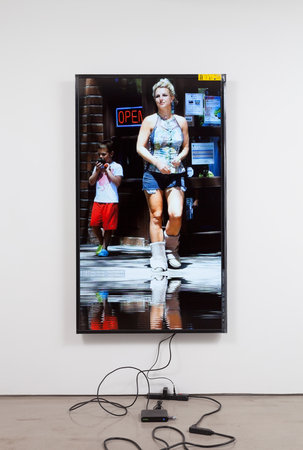 While seemingly inscrutable, many of the Lakes can be read for their specific relationships to time. An image of P. Diddy de-boarding a plane immediately activates the temporal baggage of the rapper’s manifold career-, image- and name-changes. Another work shows an extremely pixelated black-and-white photo of Jay-Z and Beyoncé. The image is a highly compressed jpeg taken from an illustration contained in On Compression, his 2007 essay about the mathematics behind image compression. This technique simplifies the file by removing much of its original information, sacrificing fidelity for convenience and creating a process of rapid digital decay. Compression serves our insatiable appetite for new information while simultaneously contributing to its degradation. A highly specific chronology charges these works not only with a certain absurdity, but also an unexpected poignancy: the Lakes act as poetic sarcophagi, cementing bygone moments in recent pop cultural history as well as the technology which helped generate them. 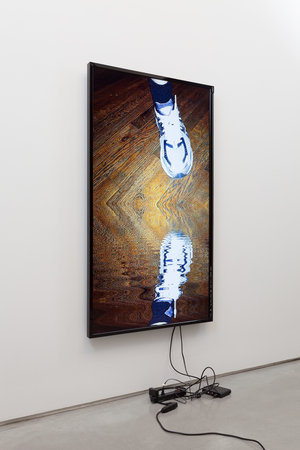 We may immediately place the autonomous elements of the artworks – the semi-iconic imagery, the televisions, the “lake” applet – but, through their relationships to one another and to their presentation, Arcangel renders them foreign. The flat-screen television, a contemporary symbol of American consumerism and capitalist aspiration, is literally turned on its side, simply and comically subverted to accommodate the vertically formatted pictures of the Lakes. On the televisions, where we expect either static or dynamic images, we get instead these strange hybrids, previously the exclusive domain of the Internet. The familiar net-material and its newfound highbrow context subvert one another, and as a result become wholly new. Arcangel’s decision to carpet the gallery further confounds expectations by emphasizing the “showroom” quality of the space and subverting its white-cube pretentions.

About The Artist
Since Arcangel’s 2011 Whitney show Pro Tools, his most recent New York solo exhibition, the artist has completed several diverse projects. He worked extensively with a team of researchers and computer experts in collaboration with The Andy Warhol Museum to unearth and preserve Warhol’s lost digital experiments, which he wrote about for the summer edition of Artforum. This past May, he launched his own publishing and merchandise imprint, Arcangel Surfware, whose products include bedsheets, iPad covers, and magazines. In July, he released his debut novel, Working On My Novel, published by Penguin.

The 36-year old Arcangel has been the subject of numerous international monographic exhibitions at both galleries and major museums, including The Carnegie Museum of Art in Pittsburgh, The Whitney Museum in New York, The Hamburger Bahnhof in Berlin, The Barbican in London and MoCA in Miami. His work is included in many public collections, including the Hammer Museum in Los Angeles, MoMA in New York, The Tate in London, Berlin’s Neue Nationalgalerie, the Smithsonian Museum of American Art in Washington D.C. and the Migros Museum für Gegenwartskunst in Zürich. This is the artist’s fourth solo show at Team.