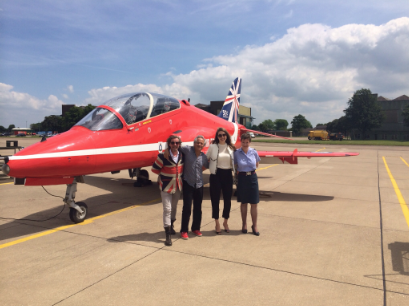 Following a visit to RAF Scampton, home of the world famous aerobatic team “The Red Arrows”, an exciting collaboration has been announced between leading international artist Anish Kapoor and the Red Arrows on a future project which will combine art with aviation in a unique and innovative way. The project, announced by Artliner, will be realised for the Farnborough International Air Show 2016.

The collaboration was initiated by Artliner, the organisers behind The Wind Tunnel Project, the 6-week exhibition held in the Grade I and II listed wind tunnels of Farnborough Airport which opened to the public for the first time in July. 2014 marks the Red Arrows’ 50th Display Season at the Farnborough International Air Show.

Anish Kapoor said: “I am looking forward to working with the celebrated RAF Red Arrows on this exciting and innovative project which will come to fruition during the 2016 Farnborough Air Show”.

About The Red arrows
The Royal Air Force Aerobatic Team – The Red Arrows opening season was in 1965. The team showcases the excellence of the Royal Air Force and represents the ‘Best of British’ and UK PLC. 2014 marks the Red Arrows’ 50th Display Season at the Farnborough International Air Show.

About The Artist
Anish Kapoor is one of the most influential sculptors of his generation. He was born in Bombay in 1954 and lives and works in London. He studied at Hornsey College of Art (1973–77) followed by postgraduate studies at Chelsea School of Art, London (1977–78). Recent major solo exhibitions include Sak?p Sabanc? Museum, Istanbul (2013); Martin Gropius Bau, Berlin (2013); Museum of Contemporary Art, Sydney (2012); Le Grand Palais, Paris (2011); Mehboob Studios, Mumbai and National Gallery of Modern Art, New Delhi (2010); Royal Academy of Arts (2009) and the Turbine Hall, Tate Modern, London (2002). He represented Britain at the 44th Venice Biennale (1990), for which he was awarded the Premio Duemila. He won the Turner Prize in 1991 and has honorary fellowships from the London Institute and Leeds University (1997), the University of Wolverhampton (1999) and the Royal Institute of British Architecture (2001). His major permanent commissions include Cloud Gate (2004) for the Millennium Park in Chicago and the Arcelor Mittal Orbit for the London 2012 Olympic Park. He was elected Royal Academician in 1999 and he was knighted in the Queen’s Birthday Honours in 2013.