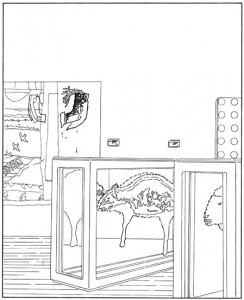 Over the last 30 years, Louise Lawler has been making photographs that depict views of objects and artworks in their everyday working environments, shifting the emphasis from the subject itself to vantage points, framing devices and the modes of distribution that affect the reception of an artwork. For No Drones, Lawler will exhibit a group of ‘tracings’, a series that she developed for her exhibition at the Ludwig Museum, Cologne, in 2013. Traced directly from her photographs, and made in collaboration with the artist and children’s book illustrator Jon Buller, the ‘tracings’ are black-and-white line drawings that are converted to a vector graphic and printed on a vinyl that is adhered directly to the wall. Each edition exists as an adaptable digital file that can be printed at any size. A ‘tracing’ takes material form only when exhibited, and it can be destroyed and remade at a different size for its next presentation. Some of the works in the show are editions of 10, while others are unlimited editions.

The longest wall in Sprüth Magers features Pollock and Tureen (traced) (1984 / 2013), a ‘tracing’ of Lawler’s iconic photograph Pollock and Tureen (1984). The original work is a medium-sized photograph, just under a metre wide, that portrays a decorative piece of porcelain placed on a shelf beneath the expressive splatters of a Pollock. Pollock and Tureen (traced) has been enlarged to over four metres to occupy a substantial proportion of the broad, window-facing wall. The result is both a representation of a previous artwork and an ephemeral installation in a particular space.

Writing in the Museum Ludwig catalogue, Philip Kaiser describes the ‘tracings’ as ‘skeletons’ that explore ‘the extreme ends and corners of pictures and their contexts.’