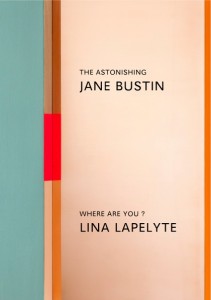 The Astonishing by Jane Bustin
and
Where are you ? by Lina Lapelyte.

The Astonishing by Jane Bustin is a series of paintings developed into modernist female icons, a balance of material, colour and structure. There is something strong and resolved in their form, but hints and sides of shadow and fragility in their effect.

The recent series of works ‘Tabitha’ and ‘St Christina the Astonishing’ take their reference from 14th century frescoes, iconography and the stories behind the making of female Saints. Whilst the final painting resembles a formalist abstract construct, the choice of colour, paint and material used, directly reflects the psychological concept of the subject.

The myth of St Christina describes that in order for her to save other peoples souls, she had to take on other peoples suffering by subjecting herself to terrible ordeals such as climbing into burning ovens, falling from treetops only to appear unscathed hence earning the name ‘Christina the Astonishing’. The materials used in the paintings reflect these ideas: the luminous fluorescent and neon acrylic, the depth and longevity of oil paint and the use of copper with its historical healing powers and as a conductor of energies.

Lina Lapelyte: Where Are You? a performance and sound work

Where Are You? a work that involves female bodies and male voices; castrato arias and instrumental drones; Italian texts and English translations. It was first presented at the David Roberts Arts Foundation at Lina’s solo show ‘Everything I Do, I Do it Big’. The sound from the opening night’s performance will linger on in the space for the duration of the show.

Lina Lapelyte is an artist, composer, musician and performer living and working in London and Vilnius.  After obtaining the degree in classical Violin in Lithuania, Lina moved to London where she studied Sound Arts and did her MA in Sculpture at the Royal College of Art. In her works such as operas Have a good Day! and Candy Shop she has been exploring the phenomena of song. Using song as an object, Lina examines the issues of displacement, otherness and beauty, re-enactment supports her investigation into aesthetics, control and reality.

Lina is also an active participant of London improvised music scene. Her collaborators include David Toop, Angharad Davies, Anat Ben David and Rhodrie Davies. Recently Lina Lapelyte has been shortlisted for the Arts foundation award and Brian Eno described her practice as ‘working right at the edge of what popular music could become.’ Currently Lina is making a new performance work, which will be presented at the Pavilion Nights, Serpentine Gallery.

The Space: Austin Forum
Austin Forum provides a project space situated within the community of the Augustinian friars. This context naturally creates a healthy tension and dialogue between the ancient Order’s traditional engagement with meaning and transcendency and the expressions and voices within contemporary art practice.
Austin Forum is a non-profit public space and project. Its aim is to bring people and groups together to engage in culture through visual art, youth work and community projects that explore spirituality and social justice. Our work focuses on creative activity which can invigorate the wider community and help it to reflect freely on the universal questions and profundities of human experience.