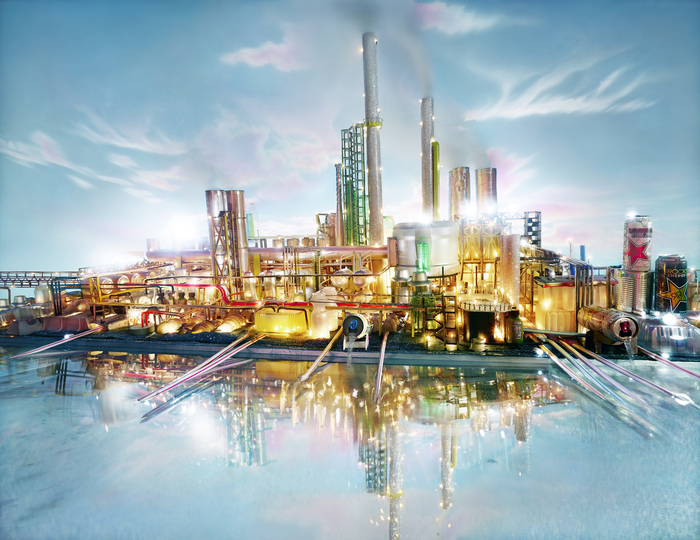 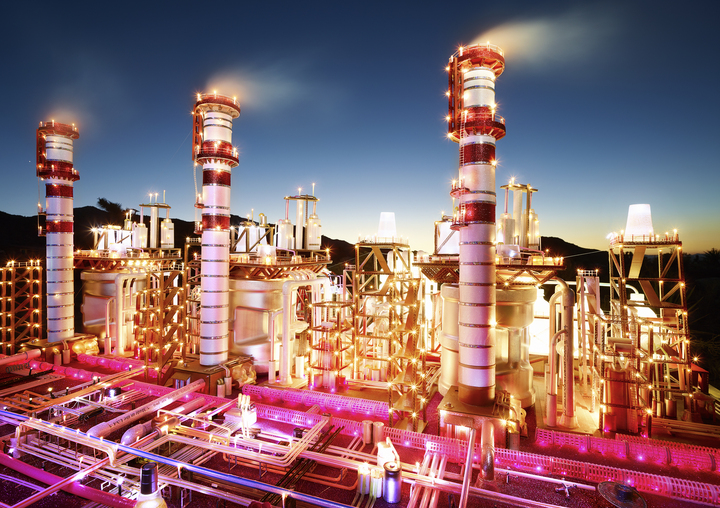 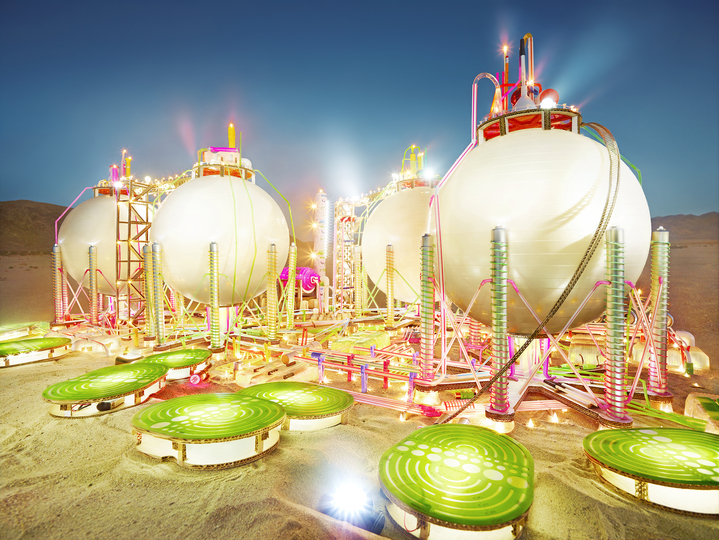 This will be David LaChapelle’s third exhibition with Robilant+Voena.

Characteristically deceptive, the series of eight photographs seemingly depict oil refineries as temples of energy production shot in glorious technicolour. On closer inspection we realise that these are far from real, rather we notice oddly recognisable objects – mobile phones, cans, egg cartons, drinking straws – a plethora of repurposed by-products of our disposable age – making up gigantic complexly handcrafted scenes. Made out of cardboard and a vast array of recycled materials these scapes were then shot variously in the Californian desert or in the artist’s LA studio, in production for over two years. They lure and repel in equal measure and question the assumptions we make about our petroleum-dependent culture, the recycling of energy and the consequences of recycling it irresponsibly. They appear magical, but LACHAPELLE would ultimately have us remember the decidedly un magical consequences of the reality.

“The qualities of watery reflections, billowing smoke, saturated colours, and the apocalyptic luminosity of the skies evoke an intense, even operatic, emotional drama. The ordinariness of the stuff of which the passion play is made bring home our own daily participation in this unfolding tragedy. In a way, the refineries are a collective portrait of ourselves, and of the world we have built to serve our desires”

About The Artist
DAVID LACHAPELLE (b. 1963) frequently employs the allegorical potential of an edifice as a composite portrait, using economies of scale and architectural vignettes to depict with flourish the reality of “what’s really going on” behind the façade. His work has explored themes as diverse as the plight of Africa, vanity, consumerism, and now ecology – his deceptively glamorous images always masking a deeper political and sociological comment. His work is included in numerous public and private collections, and has been exhibited at museums and institutions internationally including the Musée D’Orsay, Paris; the Brooklyn Museum, New York; the Museum of Contemporary Art, Taipei; the Tel Aviv Museum of Art; the Los Angeles County Museum of Art (LACMA); The National Portrait Gallery, London; and the Fotographfiska Museet, Stockholm, Sweden. The National Portrait Gallery in Washington, DC currently includes LaChapelle’s work in the show American Cool, February – September 2014. LaChapelle lives and works in Maui, Hawaii.