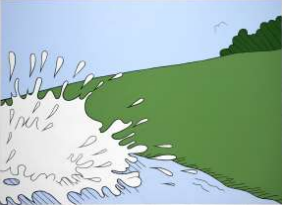 For this exhibition, Carl Ostendarp has devised a series of site specific wall-to-ceiling drip murals that envelop the gallery space and provide the context in which the works are displayed.

Taken from O’Donnells Laws of Cartoon Motion , the exhibition title describes how, in ‘cartoon physics’, a falling anvil will always land directly upon a character’s head, regardless of the time gap between the body and the anvil’s respective drop. Utilizing this suspension of natural law, that the cartoon medium allows, as well as comic tropes of parody, juxtaposition, enlargement of scale, inversion of physical properties and/or the appropriation of cartoon aesthetics/symbolism, these artists operate under the veneer of popular culture to explore private meanings, the unconscious and darker social issues – as well as reflecting, with wit, on the nature of their chosen medium.

Both Claes Oldenburg and Paul Thek were included in an exhibition titled Beyond Realism , presented by critic Michael Kirby, which took place at Pace Gallery, New York in 1965 and explored similar themes. In the accompanying catalogue essay, Kirby described the works in Beyond Realism as “banal objects…things that we experience as directly as the things of everyday life. But their presence is not the everyday, rational one. It is the presence of the unconscious.” Everything falls faster than an anvil expands this reading to look at contemporaries from this period, as well as artists working today; who take the things of everyday life, the clichés of popular culture, and twist them into the other-worldy.

“I am for an art that embroils itself with the everyday crap and still comes out on top. I am for an art that imitates the human, that is comic, if necessary, or violent, or whatever is necessary. I am for all art that takes its form from the lines of life itself, that twists and extends and accumulates and spits and drips, and is heavy and coarse and blunt and sweet and stupid as life itself.” Excerpt from Claes Oldenburg, I am for an art from Store Days, Documents from the Store (1961).

A catalogue for the exhibition is forthcoming and will include an introduction by Dave Hickey.