Hauser & Wirth presents an exhibition exploring the decade-long collaboration between Dieter Roth (1930 – 1998) and Arnulf Rainer (b. 1929). From 1972, Roth and Rainer worked together intermittently, producing pieces in tandem or exchanging works in progress which were then completed independently.

Roth and Rainer worked across media, producing drawings, collages, prints, films, live performances, sound works, over- worked photographs and poster designs. This exhibition focuses on a large group of works on paper, unveiling Dieter Roth’s share of the collaboration which has never been previously exhibited. A selection of the artists’ major film works will also be on view. The exhibition is curated by Björn Roth, son and longstanding collaborator of Dieter Roth.

The group of almost 80 works on paper reveals an artistic dialogue full of creative tension. As opposed to the harmonious nature characteristic of artistic collaboration, these works depict two egos battling for ultimate victory within the creative process. Their intellectual rivalry is evident in the voracious spirit that emanates from the resulting works.
Roth and Rainer were key figures in European avant-garde movements of the 1960s. When the pair met and began collaborating, Rainer was already established in the Austrian cultural scene and was linked to the artists who founded Galerie Grünangergasse. Roth was a frequent visitor to Vienna and was quickly accepted into the group. Creating work in the wake of Fluxus and Viennese Actionism, the collaborative projects of Roth and Rainer are centred around process, bodily action and an irreverence towards the artistic establishment.

A unique imperative within Roth and Rainer’s collaboration was that the work should be produced in complete freedom, with an absence of self-censorship and no social restrictions in place. One would pose a creative challenge to the other, thus setting off a highly energetic back-and-forth which caused absurd and increasingly incendiary reactions. Working without inhibitions, the artists were able to push past their individual boundaries and unleash a joint creative potential; the resulting works are impulsive, comical and alive with intensity. This creative principle is particularly evident in their film works, which present improvised exchanges amounting to an unrestrained portrayal of ego: Roth and Rainer perform a slapstick duel in ‘Duell im Schloss’ (Duel in the Castle) (1976), then, in Beckettian style, they endlessly prepare to act out a stunt involving a gymnast’s bar. The works on paper display a similar childlike playfulness; crude faces, animal ears, bottlecap spectacles and facial hair are scrawled on the surface of joint photographic portraits of the two artists. 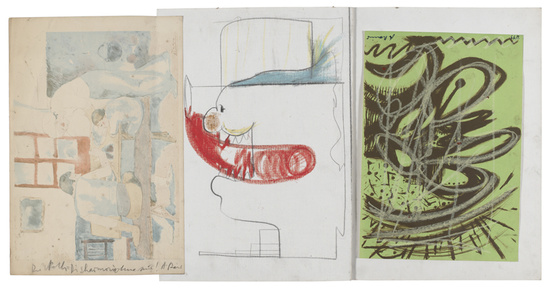 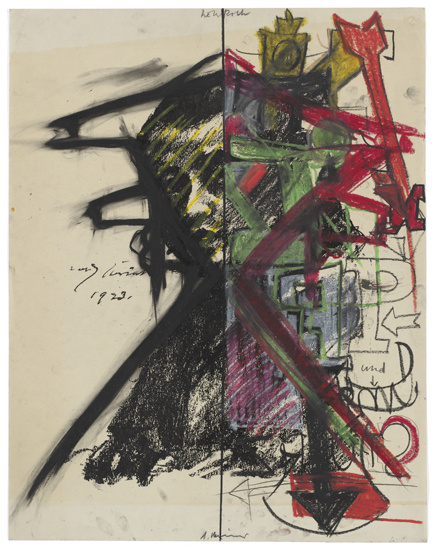 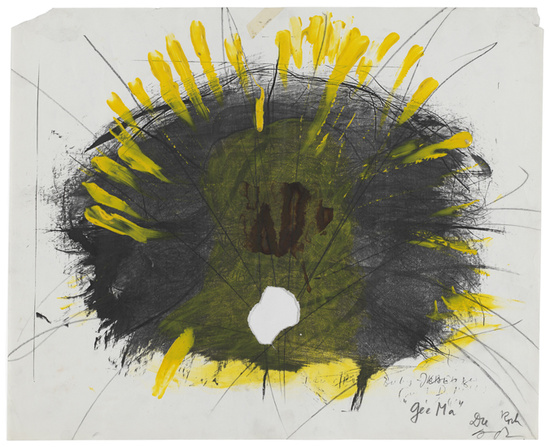 Drawing was central to their project, as the immediacy of the medium lent itself to spontaneous acts of creation and to instant results. Their ideas were often conceived and executed on the spot and an entire series of work would usually be produced in a single session, whether it lasted a day or a matter of weeks.

The drawing techniques of both artists vary greatly, and in these works the graphic drawing style of Dieter Roth combines with the heavy gestural marks of Arnulf Rainer, whose short, dark lines refer back to his background in Abstract Expressionism. In ‘Trennzeichnung (Misch- u. Trennkunst)’ (Split Drawing) (1975), the drawing is literally separated into two halves, and the two artists’ input can be directly compared as one mimics the other, tracing horizontal lines from left to right, the left in a series thick black lines and in a lighter graphite on the right. Sometimes, both artists would even impersonate a fictional third artistic character in order to overcome discrepancies in their styles.
The contradiction of two opposing forces within these works is sometimes resolved in a surprising way, for example in ‘Tripel (Misch- u. Trennkunst)’ (Triple) (1975), where accidental shapes created by wild, scribbled abstract gestures have been reined-in and reworked as a figure in profile using neat crayon colouring.

‘Misch- und Trennkunst’ was the title of Roth and Rainer’s first collaborative exhibition at Galerie Grünangergasse, and it is the terminology that the two artists themselves used to describe their practice – a process of ‘Mixed and Separate Art’.