Enrique Brinkmann ‘Painting in Space: The Dilemma of Gesture’
Through to 29th March 2014 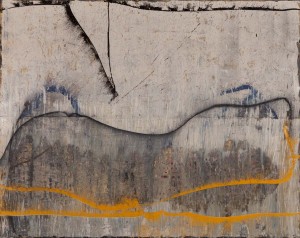 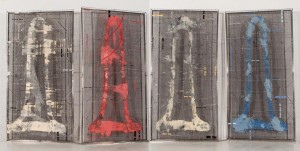 Fed up of the rain, wind and stresses of London life? Step from Oxford Street and into the calming interior of Rosenfeld Porcini; an oasis of serene imagery, submerging canvases and mesmerising mark-marking. “Painting in Space” showcases Enrique Brinkmann’s most recent works, all of which offer a stunning collaboration of media, aesthetics and texture.

Brinkmann’s new reportage series recall his previous black and white period (1961 – 1974) as well as nodding towards Picasso’s journalistic, foreboding aesthetics in Guernica. Working on paper, in monochrome, Brinkmann creates a perfect symbiosis between narrative and formal experimentation that presents a philosophical approach to human drama. More than this though, his works are full of intrigue, beauty and honesty. His objectivity represents something more, something truer and more real than just paint on a canvas. His extreme sense of aesthetics extends as far as designing the complex pressed cardboard frames, which demonstrate the artist’s hand, pencil mark making, on their surface. These panels, such as ‘reportaje analitico’ 2013 also nod towards other aspects of cubism, such as collage, ‘cut and paste’ aesthetic and the indication of colour. This series is completed by the sculpture Estela which is a three-dimensional realisation of the paper works.

Brinkmann’s contrasting series housed upstairs feature a selection of paintings on steel mesh that accommodate both painting and sculptural tendencies. Exploring the idea of using a metal weave as canvas and a form of sculptural relief he works the paint into the textural surface on both sides of the metal, creating not only a complex, gesticular aesthetic but also a sense of transiency, impermanence and freedom. These works allow the viewer to stare beyond their surface into the manifold layers of paint within. They invite more than a glance, but an upfront, focussed analysis of their visual language.

The exhibition also features a video installation that enables the viewer an insight into the artist’s practice. The work demonstrates his careful, scientific placement of gestures and marks that echo Joan Miro; a fascinating view of the meditation and schematic positioning of paint.

“Painting in Space : The Dilemma of Gesture” is a haven of beautiful imagery and artistic development; the perfect escape for any weathered visitor.

b. 1938, in Malaga, Spain. Enrique Brinkmann abandons his training as an industrial engineer (1955) to focus on painting. The artist is self-taught and exhibits for the first time in Malaga, in 1957. He later joins the Picasso group and collaborates with the M.A.M. (Artistic Mediterranean Movement). Between 1961 and 1966 Brinkmann lives in Germany, residing in Cologne and Berlin. He travels periodically across Europe; this leads him to collaborate with the Fluxus Group, illustrating a music score for experimental composer Cornelius Cardew. As of 1967, the artist permanently relocates to Spain, living between Malaga and Madrid.