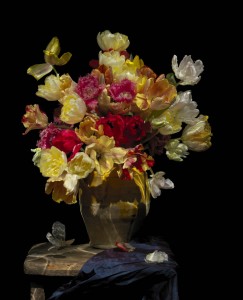 Meeting Alexander James was such a treat. Surrounded by monumental images from his “Vanitas” series within the coveted walls of The House of St Barnabus in Soho, Alexander oozed honesty, brilliance, commitment and intellect; notions seconded throughout our discussion. Wearing a striking suit and ordering a triple espresso, he chatted with me with such ease, interest and integrity. He is a perfect gentleman and a true artist.

What are the main ideas you would like to express in your works?

I like the term ‘Tragic Baroque”. I am unfortunately inflicted with a sad set of experiences with love-life and family that has driven me to work. “Ophelia” is a story of a dead lover, for example. Its very easy to be a commercial artist. Its very difficult to be an artist that doesn’t care about the commodification of art. Selling art is not a cause or concern for me. What I do is in itself expensive. There is more involved for me than standing at a canvas with a brush. 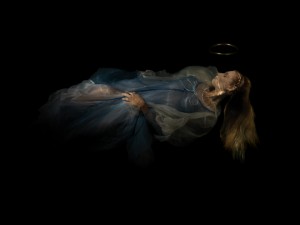 Your works are often compared to the Dutch Still Life’s of the 17th century, who used organic props to emphasis the fragility of life and the ephemeral nature of human existence. Was it a conscious decision to reinvigorate a traditional medium?

I am stuck in a Flemish life. I live like an artist from 200 years ago, not just in Moscow but also here in London. I ride around on a bicycle, I make the garments, I grow the flowers, I breed the butterflies; there is a very intense dialogue between me and every subject, which is very important. I have been doing this all my life, and nothing’s changed; its a progression of the same dialogue. I am lucky now that I am getting better at it!

Do you think Still Life has relevance within contemporary art today?

Ofcourse. I only touched upon the figurative 2 years ago, abstract 6 months ago, and after 30 years thats quite a thing. I consider Still Life a training ground and I just haven’t stopped training. Today there is so much art, so many artists; marvellously talented practitioners, you only have a certain number of ways to approach what to put on a canvas. I don’t really like regarding myself as a photographer, but hope that I am more. The halo for Ophelia is a floating, golden ring made out of 24 carat gold. I don’t outsource anything so I had to teach myself how to work the metal and fabricate something that is hollow inside. There are no cheats. They’re not just photographs, or still lifes.

The Instagram, Facebook culture that we all seem so obsessed with is so fast, so disposable. I am not doing this because I want to slow the process down, but I believe when you do it has the opportunity to be profound. Photography’s reproducibility is something I fight greatly against – I now produce single edition artworks, which is very unusual for me, its a new step. The transparencies are destroyed as soon as I come out of the dark room. Photography is a medium that has given us so much, it would be nice to see it return to complete physicality. 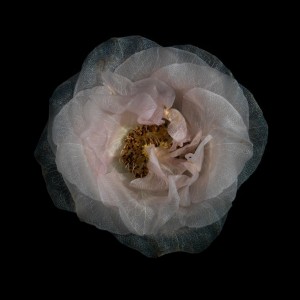 Explain to us your relocation process.

I first went over [to Russia] just for a few days to plan some things with galleries, but the whole thing has been in the works for a few years.

That trip made me decide. Russia’s a very specific market and if you’re a serious artist planning to take the Russian market you need to do it in a respectful way. I just think making things in London and shipping them off in a plane just didn’t feel right. I just decided; ‘thats it, lets move’. I bought a seven tonne truck and loaded it with my entire studio and I drove myself out there. Just me.

Hell. I’m living at the Red October which is a very famous, old chocolate factory that dominates the Mayfair of Moscow, but back in the day it was quite different. The room I’m in was the original Theodore von Einem one. It was the first room in which chocolate was made at this factory, and since then it has grown; been through Tsars and wars. It has become a very strong symbol for Russia, so for me it was really important to choose this place. But the space is hell. It hadn’t been occupied for nearly 60 years. Its dangerous, the floors are wonky. Its terrifying. And wonderful. There’s always someone singing. Someone playing the piano. Some crazy-cat doing something fun. There’s an amazing energy.

I dont have a shower, but I do have a toilet now!

I had my own battles getting across the border, which is a story in itself! But when I arrived I had completely run out of money. I was skint. I turned up there and because of this problem with the border I got blackmailed. They just didn’t believe I was an artist, so they kept throwing me out of the system. I kept on going through, kept it up for four days – I would not let them beat me – and then in the end I got across but I had to pay a staggering amount of tax to bring my own property into the country. When I arrived I had no money to pay for staff to help me, so for 6 weeks I worked alone, moving around 40 tonnes of equipment. I was just awful. But that’s part of the journey. Its not a complaint, I knew it would be difficult. The studio is finally live though, but I am extremely behind.

You have described your relocation as a means to contact and submerse yourself in Russian culture in order to produce works relevant to a Russian audience. How much do you think your surroundings affect your artistic endeavours?

I think anyone who knows Russian will know its flavour. The show itself will involve Pre-Raphaelite figures, the people we’re using; the faces. We are hand making the garments using local, traditional methods and yarns. I am working on a crown of thorns at the moment, so the works will have a religious tone. Russians are deeply religious but I have to be careful not to poke fun. I want to be respectful but also pose a few questions. What else is art supposed to do? I want to make art that asks questions, but is also at its core is beautiful. I am not into shock and awe. But for the first time in my life I am not actually sure. We will have to see what happens.

Would you describe your art practise as all-consuming?

The idea of bringing something in as art that is in no other part of me life is absurd to me. Everything I do involves my practice. I cut flowers and I’m reminded of the inevitability of death. Even things that are precious objects mean nothing to me. I live a stupidly humble life; a have a suit, a bicycle and a little truck. I am absolutely married to my work. I’m 46 years of age, I’m not married, I don’t have children, but I’m excessively happy. I get up in the morning and rush to work. For me to go to sleep in a space that is not my canvas is absurd. I have always lived and worked in the same space. I am always interacting with the work. I am not very social to be honest, in London especially. It is all encompassing. Absolutely. There is no separation between me the person and me the artist. None whatsoever.

Have you considered using your water tanks with suspended, submerged objects as autonomous sculptural pieces?

I have one for Russia. I toyed with the idea for a London show a couple of years ago. I would like to present one of my tanks like a Vitrine, so actually people could see how its done. I shoot from a massive 10×8 lens, with no post-production or photoshop, so it will be great to demonstrate my process. There will be a 1 tonne vitrine in the show in Russia, and I am very excited about it.

How much of your work is left to chance?

It’s Pollock-esque in approach, how I use sticks and brushes to give me the textural pattern in the water that I want, and thats the part that is not chance. If there is something I don’t like within the scene that I work on the most. But I don’t mess about. Each shot is precious.

How did you initially come up with the idea for submerging natural items in dark, purified water tanks?

I have been working underwater my whole career, I moved out to the Caribbean as a teenager and did underwater diving photography. So its from the very beginning. This depth of focus has been about 21 years now. I haven’t looked at anything else.

What defines something as a work of art? Do you think photography has lost its artistry with the modern inundation of images?

I have an aversion to images that are not actually true photographs, that are digitally printed or manipulated. I am respectful of their practise, but I am not respectful of the final delivery. If a photograph is to be considered a work of art it has to be more than digital fodder. It has to say something to you for a lifetime.

What would you say to people who describe your works as ‘commercial’ because they’re aesthetic?

Come to the studio and see how they’re made, and then decide. Learn about the practise. If I wanted to just be ‘commercial’ there are far easier things I could be doing.

Name three artists that have inspired you.

At the moment I am completely in love with Russian artists; Kandinsky, Vavilov. I never really look at works of other photographers. Lets leave it at the Russian’s for now!