14th February – 22nd March 2014
Richard Hamilton was one of the most influential artists of the twentieth century, for whom printmaking was essential to his practice. Tonight the Alan Cristea Gallery presents a major survey of Hamilton’s original prints coinciding with the fourth exhibition of his work at Tate, this time a major retrospective at Tate Modern (13th February – 26th May 2014) alongside an ancillary exhibition at the ICA (12th February – 6th April 2014).

Alan Cristea first met Richard Hamilton in 1974 and went on to work closely with the artist for over thirty years. This exhibition explores the themes of protest, portraits, interiors and landscapes, incorporating different versions of the same images and themes, to provide an unparalleled insight into Hamilton’s creative process and his breadth of visual experimentation. 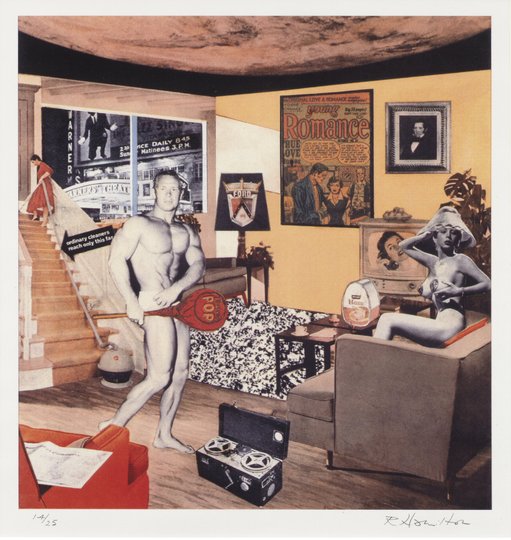 Hamilton’s first forays into printing began with experiments in screenprinting, as seen in the early work Adonis in Y fronts (1963) on show at the Alan Cristea Gallery. The exhibition will feature a number of Hamilton’s most celebrated prints including a 1991 version of his seminal 1956 collage Just what is it that makes today’s homes so different, so appealing?. This was the work in which the word ‘Pop’ first appeared, the term that then lent itself to an international art movement which was defined by Hamilton himself in a now famous letter written in 1957 stating that “Pop Art is: popular, transient, expendable, low- cost, mass-produced, young, witty, sexy, gimmicky, glamorous, and Big Business.”

Hamilton was an artist who drew directly upon the social changes he was witnessing, whether reflecting on the rise of a consumer culture or on the mediation of political events. The artist’s Swingeing London ’67 series of prints and paintings served as Hamilton’s response to the arrest of his friend and art dealer Robert Fraser, along with Rolling Stones singer Mick Jagger, during the notorious Redlands police raid.The Alan Cristea Gallery will present several prints from the series, displaying Hamilton’s propensity for using printmaking as a way to explore multiple manifestations of the same image through varying interpretations.

He also explored classical forms of printmaking, most notably in Picasso’s meninas (1973), which will feature in the retrospective. The genesis of this work was an invitation from the Propylaen Press to contribute to a print portfolio celebrating Picasso’s 90th birthday. At Hamilton’s insistence, he sought an introduction to master printer Aldo Crommelynck who had collaborated closely with Picasso for more than 20 years and after 1961 printed all of Picasso’s etchings .Crommelynck and Hamilton continued to work together extensively over the course of his career.

Hamilton has said of the relationship between artists and printers:

“Early in my experience of printmaking I came to accept the advantages of working with great craftsmen…Master printers know their workshops, their presses, acids and pigments. The artist’s responsibility is to labour over his plates or stones…He must be a control freak until that final proof is made. Then it is up to the printer to complete the edition.”

The Alan Cristea Gallery will publish the first posthumous catalogue of Hamilton’s prints to coincide with the exhibition. This includes both the texts from Penny plain – tuppence coloured and New technology and printmaking – exhibitions originally held with Alan Cristea – and an essay by the art critic Jonathan Jones, along with Hamilton’s notes to all the prints.

Hamilton’s collage of 1956 entitled Just what is it that makes today’s homes so different, so appealing? is widely acknowledged as one of the first pieces of ‘Pop Art’ and his written definition of what ‘pop’ is laid the ground for the whole international movement. Since then his work, both in painting and printmaking, has consistently challenged and broken boundaries and he is considered to be one of the most important artists of the twentieth century. He has had exhibitions in and his work is held by almost every major museum in the world.
Hamilton died in 2011 leaving an unsurpassed contribution to the field of contemporary art.
wikipedia.org/wiki/Richard_Hamilton_(artist)