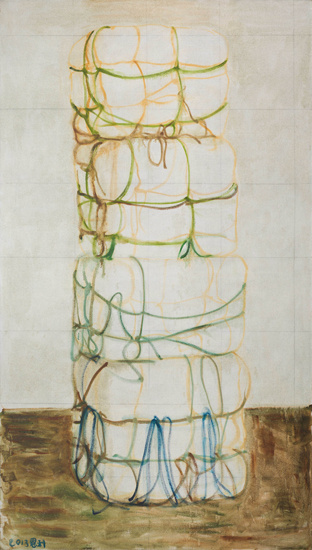 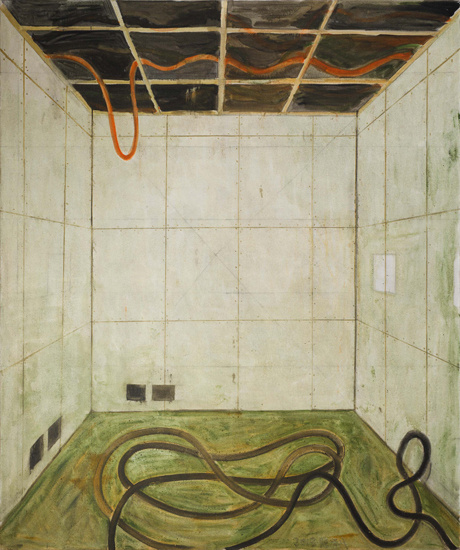 Zhang Enli is a champion of forgotten spaces and objects. His practice is grounded in melancholic portrayals of objects or places from everyday life, through painting, sculpture or installation such as ‘Space Paintings’, in which he paints directly onto the walls, ceilings and floors of a room. For ‘The Box’, Zhang’s second exhibition with Hauser & Wirth in London, the artist will present his first-ever sculptural installation alongside a new series of paintings.
In his paintings, Zhang creates an index of commonplace objects related to humanity. Taking visual material from whatever is close at hand – a piece of string, a hose, a marble ball from the floor of his studio – Zhang draws us into his world, documenting the more prosaic aspects of contemporary life.

Influenced by the loose washes of traditional Chinese brush painting, Zhang dilutes his paint until it is almost like a glaze, leaving pencil-drawn grids visible beneath the layers of paint. By allowing the grids to show through the painted surface, Zhang constantly reminds us that his paintings are artistic constructs,not direct replicas of any given object. The perspective of each painting is skewed to heighten the drama of the object’s shape, but Zhang’s expressive lines and curves are kept in check within this measured framework. In this way the rigid structure of his pencil-drawn grids can be viewed as a means of ordering the chaos of contemporary life.

Zhang’s paintings are rarely produced from direct observation, but from sketches, photographs and, significantly, from his memories of the objects he is depicting. The muted tones and thin application of paint make the objects seem not quite present, as if occupying a liminal reality where only the essence of the object is depicted on the canvas. His subject matter is usually enlarged, so that only a specific fragment of a scene is shown, as seen through the viewfinder on a camera. In ‘Architecture’, Zhang portrays a modern building, but instead of a sweeping cityscape, he hones in on a section of a window, contrasting the transparent bluish hue of the glass pane against the building’s heavy structural lines. Although Zhang chooses to work with grids, a common technique when enlarging photographs, this belies the nature of his practice, since his depictions are not faithful renditions of objects, but highly personal offerings.
?
His previous series have often taken containers as their subject matter, whereas in his recent work Zhang is occupied with the nets and twine that bind these containers. Three works, ‘The Box’, ‘The Cargo (3)’ and ‘The Package 2’, depict colourless, non-descript shapes, which are transformed into mysterious bundles by a mass of brightly
painted knots and tightly bound string. In ‘Transparent Shelf’, Zhang plays with the blankness of the canvas in another way. Here, only loosely sketched horizontal lines suggest the presence of a shelf. It is rainbow- coloured ribbons, which are draped vertically over the shelf’s structure and descend to the floor as a result of gravitational pull, which create the apparition of a ‘shelf’ out of the void.
In his ‘Space Paintings’, Zhang paints directly onto the walls of a room to create nostalgic environments.
These range from the abstract, where colour and gesture recall sights and sounds of a particular place, to figurative reproductions of redundant, empty spaces. Zhang renders mould, dirt and stains which climb the walls and spill onto the floor, often alongside marks left by furniture or picture frames – all remnants of human interaction with a room which was once inhabited and is now deserted. His ‘Space Paintings’ depict a kind of negative space, as the viewer uses the marks and absence of objects to re-create presence through imagination.

For ‘The Box’, Zhang will engineer a more intimate and completely immersive version of a ‘Space Painting’ by painting the inside of a freestanding plywood box. Whilst Zhang’s paintings on canvas are broadly representational, the narrative element of the ‘Space Paintings’ is determined by the viewer. Zhang’s painting acts as a catalyst for the viewer’s imagination, and for personal narratives which emerge whilst walking through the painting installation.

About the artist
Zhang Enli was born in 1965 in Jilin, China. In 1989, he graduated from the Arts & Design Institute of Wuxi Technical University and relocated to Shanghai where he was a teacher at the Arts & Design Institute of Donghua University until 2008. Zhang remained largely overlooked during the post-socialist Chinese art boom of the nineties, escaping the hype of his more fashionable Chinese contemporaries. He is continuing to gain recognition for his work internationally.

Hauser & Wirth will present ‘Internal Riot’ an exhibition of new paintings and works on paper by American artist George Condo. Made during the quarantine period

Featuring 100 Art Basel galleries from 28 countries and territories, ‘OVR:2020’ is exclusively dedicated to works made this year below are five artworks that caught our eye. 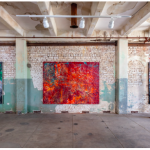