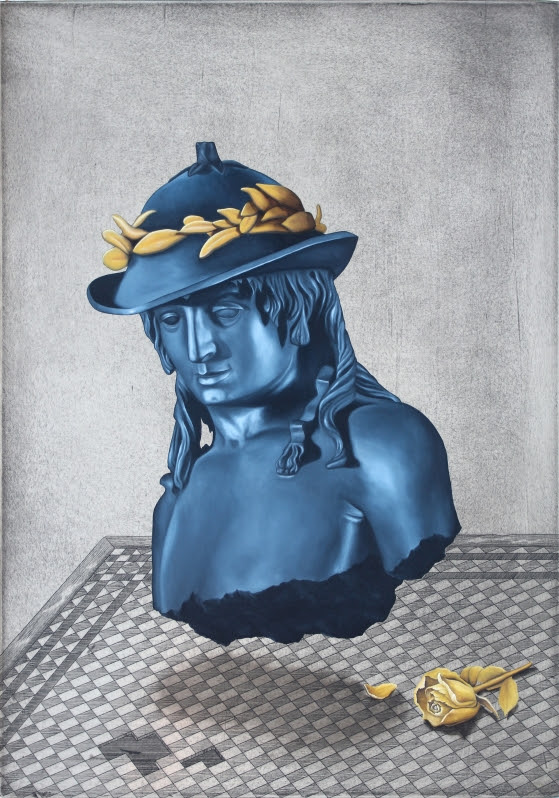 An empty figure stands, facing us, arms outstretched. There is an air of mystery to him, for he stands half shrouded in layer upon layer of undulating fabric. He (for we presume it is a he) has the air of a martyred saint, open, presenting himself to the world. The dense etched lines that comprise the folds of what can only be parachute fabric hark back to another era; while the medium transports us to the past, the figure himself greets us, like some Icarus before his leap from the sky. His body is absent, replaced by a void of floating clouds, sky and tessellated figures, an endless view into infinity. And yet… he commands our attention. He is unmistakably present.
As with all of British artist Chris Agnew’s detailed works, there is a story behind the figure he presents us with. However, it is what the figure represents, rather than who he is, or once was, that is of importance.

It is with this in mind that Kristin Hjellegjerde (ARTECO) is proud to present The Mighty Grip of Fate, a solo show of Agnew’s works, running from 10 January to 9 February 2014. In the case of The Tailor’s Dummy, Agnew has based the work on a photograph of Franz Reichelt, an Austrian tailor who developed one of the first parachutes in Paris in 1912. His virgin flight, from the first platform of the Eiffel Tower, resulted in his death. Explains Agnew, “His story is now just a footnote in the history of aviation, but I liked the idea of him as a contemporary saint, risking it all to grab the attention of the men with the money; an idea that resonates with a lot of people today.”

Herein is the crux of Agnew’s oeuvre – the construction and deconstruction of belief systems, be they political, religious, social or cultural. “The gap between what we know to be true and what we believe isn’t always one and the same,” he explains. “Facts have a habit of falling into the gaps that beliefs have opened.” Indeed, Agnew finds his inspiration in historical etchings and classical paintings, and it is the inclusion of geometric patterns and tessellations that produces his characteristic style. He works by engraving directly onto the gesso surface of primed wooden panels. He then applies black oil paint, which he wipes off to reveal the etching, and later paints areas onto the surface. In doing so, he creates an intriguing juxtaposition of the permanent and impermanent – rather than etching onto a block from which to create prints, he constructs the print, in a sense, directly onto the surface. Agnew uses this most permanent of techniques to illustrate the very impermanence of what we know. “Something that questions itself operates in the most honest state of being, as it doesn’t pretend to know the answers,” he explains. “I wanted to use the relationship that engravings have with the dissemination of a particular ‘truth’ and manipulate it for my own purposes, almost as a visual pun on the concept that absolute truth is an unobtainable ideal much in that absolute freedom is.”

The use of tessellations and geometric patterns, then, also plays an important role in Agnew’s work; he states that they are part of the human psyche’s need to “seek and observe rhythms and patterns at work in nature and particular events.” They act as our way of seeking order in the universe; when facts or events don’t add up, we try to make them do so in the eternal search for the ‘bigger picture’. Here, the patterns fill the empty spaces where each painting’s characters would be – an intervention of sorts. By erasing the characters from their scenarios, each work becomes less about the person or original inspiration, and more about what they have come to stand for – whether this is true or not. Indeed, Agnew undertakes meticulous research for each work, and every item he depicts is connected to the original subject. “Rarely do I use an image, or an object, that doesn’t have some connection – no matter how tenuous or esoteric to the subject matter,” he says. Take for example a portrait inspired by Rasputin: the objects on the table are from the Yusapov Palace (now a museum), where the famous Russian was assassinated.

It is through this delicate balance of permanence and impermanence, of fact versus fiction, that Agnew brings together various elements from history to present an entirely different scenario. Figures from times past and present merge to produce intricate narratives, stories drawn from the threads of history and woven to create new patterns. “Past truths are unobtainable,” he concludes, “but you can remove the possible corruption of future truths. It could be described as an almost anarchic look at history, but with optimistic intentions for the future.”

About The Artist
Chris Agnew is a British visual artist, focusing on finely detailed drawing, painting and his signature technique of etching on panel. His practice is largely concerned with the construction and deconstruction of belief systems, specifically in relation to the control and dissemination of information. The imagery in his works is diverses: architecture, interior design, geometric forms, miniature painting and abstract elements all play a rold. He received his BA in Contemporary Art Practice from The University of Leeds in 2008, followed by a Masters in Fine Art at the Wimbledon College of Art in 2010. His work has been short-listed for the Jerwood Drawing Prize in 2009 and 2010 consecutively, The Clifford Chance Post-Graduate Printmaking Prize in 2010 and Saatchi’s New Sensations in the same year. He is also a recipient of the Jealous Graduate Print Prize (2010). His work has been exhibited in Japan, Italy and throughout the UK – including the Royal Academy of Arts’ Summer Exhibition. His work has been featured in numerous printed and online publications, including NME magazine, The Telegraph, and on the front page of The London Evening Standard. His first solo exhibition – The Pomp of Circumstances – was held at Nancy Victor Gallery in London in 2012. His work is held in private and public collections, including the Victoria and Albert Museum permanent collection.
He divides his time between London and his studio in Bucharest. Chris Agnew is represented by Kristin Hjellegjerde, London.