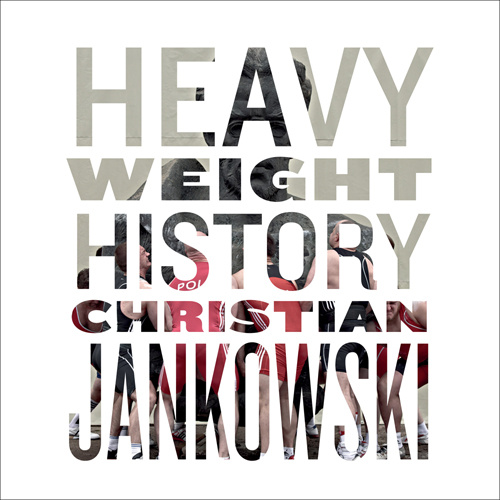 Last year the German artist Christian Jankowski travelled to Poland to produce Heavy Weight History, which consists of an installation, a 25-minute film and a series of photographs. Jankowski invited a group of burly weightlifters to try and pick up a number of massive public sculptures in the Polish capital of Warsaw, including more than one Communist-era memorial, a statue of Ronald Reagan and the figure of Syrenka the Mermaid, a famous, often vandalised symbol of the city, first erected in 1859. Wearing their national colours, the Polish champion powerlifters and bench-pressers struggle and strain to elevate these hefty bronze and brick monuments, metaphorically attempting to lift the very burden of history on to their shoulders.

Simultaneously disturbing and stimulating debates surrounding the still-raw history of Polish occupation by the Nazis, as well as the country’s protracted period of Soviet rule after WWII, Jankowski’s film conversely posits a light-hearted and socially-inclusive aspect to his controversial undertaking – that of reinvigorating locals’ relationships to oft-neglected bits of Varsovian public statuary. This questioning of the continued relevance and future siting of public sculpture continues a line of enquiry by Jankowski that has previously seen him create numerous life-size bronze Living Statues (2007) – simulacra of street performers posing as Julius Caesar and Che Guevara in Barcelona – as well as a giant socialist-realist sculpture based on an anachronistically luxurious photograph by one of the Mexican Muralists, entitled Monument to the Bourgeois Working Class (2012).

As with other films of Jankowski’s, such as Casting Jesus of 2011, the live, performative elements of Heavy Weight History have been documented in the style of scripted reality television, or specifically in this case as a convincing piece of outside broadcast coverage of a competitive sport, with a well-known Polish commentator on hand to describe the action. For his fourth solo show with Lisson Gallery in ten years, Jankowski is also presenting another recent film, Crying for the March of Humanity of 2012, in which an entire episode of a Mexican telenovela has been remade, except that the lines of dialogue have been replaced by actors sobbing and crying rather than speaking – extending the dramatic, climactic soap opera moment into something more like hysteria. Photo-realistic canvases from The China Painters series (2007-08), produced by copyists from the notorious ‘oil painting village’ of Dafen, complete Jankowski’s exhibition, while similarly highlighting the potentially serious ramifications of staging or altering reality, whether that manipulation happens through translation via mass-media or as a by-product of an inherent flaw in man’s nature.

About the artist
By utilising the medium of human relationships, the comedic formulae of slapstick humour, or indeed any of the other innumerable tools of modern communication available, Christian Jankowski trades blows with history, politics and the language of art. His works are almost always ‘performances’ – both literally and figuratively – in so far as his carefully calibrated set-ups and interactive scenarios engage occasionally ?unsuspecting collaborators: televangelists, fortune-tellers, border guards and professional magicians have all innocently colluded with him to become ‘co-authors’ of his wide-ranging work. The collaborative nature of Jankowski’s practice is paramount, as each participant often unwittingly contributes his or her own texture to the story. There is as much emphasis on the journey as the destination, and the risks and chances inherent in Jankowski’s collaborations ultimately give surprising shape to the final works, whether these are photographs, paintings, sculptures or video installations. By foraging for food in a supermarket with a bow and arrow (The Hunt, 1992), renovating an exhibition space under the auspices of a reality TV show format (The Perfect Gallery, 2010) or selling a souped-up speedboat as a work of art at an art fair (The Finest Art on Water, 2011), Jankowski proves that he is not frightened to turn the camera, canvas or microphone back on himself. Such playful but far-reaching projects also tug at the very fabric of society itself, querying many notions of authorship, ownership, originality, propriety and authenticity that might otherwise be taken for granted.