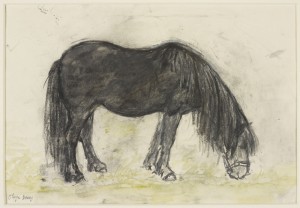 London and indeed the country was awash with celebration to mark the Queen’s diamond jubilee, and she would have received many gifts from other countries, various dignitaries and institutions.

One such institution is the Royal Academy which has a historical tie to the Royal Family and presented her with 100 works on paper by Royal Academicians. Expectations must have been high when opening these beautiful red silk boxes with the hope that some stellar artwork would be contained within. The contents are now on display in the Queen’s Gallery in an exhibition titled Gifted.

Many notable artists are members of the Royal Academy and most of them are represented here. The first difficulty lies in the medium of paper, especially for those Academicians who are noted for creating sculpture. The submission by Anish Kapoor is unmistakeably his with an intensely bright circle of red at the centre of the work, but his use of colour loses its vibrancy when applied to paper and falls flat. Tracey Emin is yet to create a decent work on paper and Antony Gormley is only really a sculptor and it shows.

Yet even those Academicians who are talented painters or draughtsman disappoint here, Grayson Perry’s motorcycle lacks the incision of his other works. Some artists have created works of a decent quality such as Chris Orr’s view of London and Bill Jacklin’s expressive landscapes. It’s nothing we haven’t seen before from these artists but stands well above most of the other works on show.

You may be thinking we see plenty of sub-par works at the Royal Academy’s Summer Exhibition but this is of a much lower quality and at least the Summer Exhibition has some quality lesser known artists to elevate the average.

The ultimate indignity is that members of the public will have to pay to visit a collection that really isn’t worth the time spent in it. Luckily the ticket also includes admission to Castiglione, which is a much better exhibition.

These works were gifted to the Queen but she’s probably wondering whether they can be re-gifted.

Gifted is on at Queen’s Gallery until 16 March and tickets are £9.50