Has Lady Gaga used the music industry as a mere platform for her work as a performance artist? Is her transformation from beginning as a reasonably conventional Pop artist, with the release of her debut single ‘Just Dance’ in 2008, into the most famous, controversial and visually bizarre artist of our time completely deliberate? Was this her plan all along? Has Gaga hijacked the music world and the world stage to enable her to show her true colours as a visual artist?

Gaga’s links to the visual art scene are undeniable. Much has been written about her art and style imitations within her music videos, onstage productions and media events. The influence of other music artists, celebrities and personalities on Lady Gaga’s image stretches from Madonna to Bowie, from Cher to Ke$ha. But with the extravagant launch of her new album ‘ARTPOP’ and her recent collaborations with American sculptor Jeff Koons (b. 1955) has Gaga finally tapped into her intended industry: the visual arts? 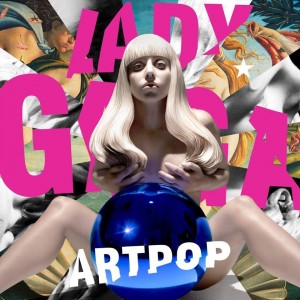 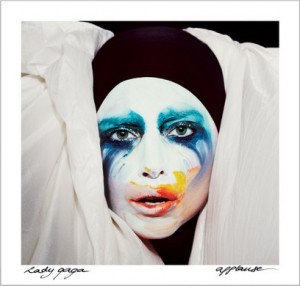 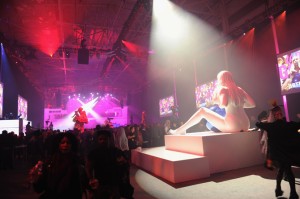 Gaga’s acute knowledge of fashion, music, current art practices and the history of art has been clear for a while; she calls upon 80’s music icons and catwalk fashion throughout her videos. But suddenly Gaga has taken it one step further, literally transforming herself into a piece of sculpture, recording a mimicry of the avant-garde Serbian artist Marina Abramovic’s video and transforming herself into the female protagonist of the canonical ‘Birth of Venus’ (1486) by Botticelli. Gaga is clear with her intentions though, titling her new album ‘ARTPOP’ and announcing it as an attempt to reconcile art and commerce; ‘we will travel all the way from art to pop, to back again’ [Lady Gaga @her ARTPOP launch show] Connections have previously been made between Gaga and Pop Art, some calling her the ‘new Andy Warhol’; the connections between her phenomenal success, money-making and artistry are undeniably linked to the mass production of Pop Art, but Gaga actually does more than this surface analysis suggests. During her ARTPOP performance she was not only accompanied by her monumental white plaster sculpture (by Jeff Koons), but was also literally transformed into a sculptural form at the beginning of the show. Her white PVC suit recalled works by artists such as Marcel Duchamp ‘Nude descending a Staircase’ (1912) and Futurist sculptor, Umberto Boccioni ‘Unique Forms of Continuity in Space’ (1913). References to Futurism are seconded in her audio performance: electronic sounds and robotic voices. 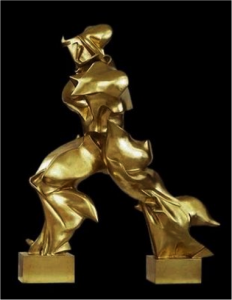 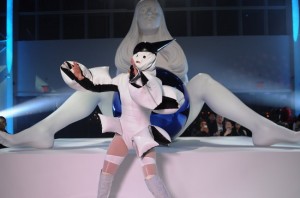 Other artistic references are embedded throughout her work. Despite Gaga seemingly adopting different characters in many of her performances and music videos, ‘Applause’ especially brings forward ideas of the persona, as seen throughout the work of Cindy Sherman. Sherman adopted various roles in her photographic works in order to disappear behind the masking of stereotypes and to subvert and deconstruct the patriarchal role of women as objects in art. Within ‘Applause’ Gaga thrashes around on a bare mattress in black underwear, recalling Sherman’s ‘Untitled #93’ (1981) and Sarah Lucas’ 1990’s bed sculptures. Gaga, like Sherman, assumes so many different appearances, clouding her true personality and promoting the stage presence that is LADY GAGA.

Further still, Gaga has blatantly referenced iconic images of the Italian Renaissance, Botticelli’s ‘The Birth of Venus’ in her X Factor performance, literally turning herself into the classical Goddess of Love and the central figure of the piece. She becomes the physical realisation of an idealised woman of antiquity. Prestige, fame and media attention are central to all of Gaga’s practice and she knows how to work it. Whether considered a show-man, a fake or a lunatic, Gaga has elevated herself to extreme status and importance in the music industry, showing her understanding of ‘the cult of the artist’ and the notion of artistic genius prevalent in the art world since the beginning of the Renaissance, when artistry developed considerably from ‘craft’ to ‘skill’. 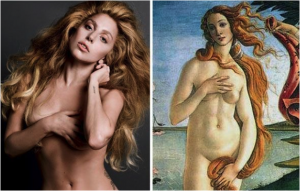 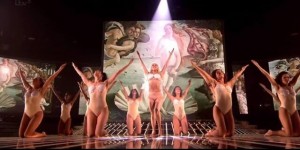 Time and time again Gaga reinforces her performances with constant references to art, demonstrating her acute knowledge ad interest, but perhaps also promoting herself as a performance artist. The comparison between Gaga, Pop Art and Warhol seems too linear, especially after the obvious naming of her new album ARTPOP, but Gaga is certainly breaching the divide between music, art, fashion and technology. She is a hybrid. A fantastic example of performance art for the mass audience.