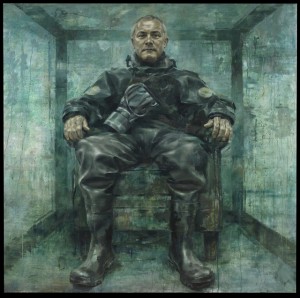 Portraits of celebrities often divide gallery visitors. Some people like to see faces they recognise and appreciate that paintings are often a way to see past the external veneer and expose a hidden vulnerability you wouldn’t see in publicity shots. While detractors would class celebrity portraits as a cheap gimmick to get people through the door and an easy way to relate to viewers even if the painter isn’t particularly skilled. So where does this exhibition sit on the sliding scale?

There are stars of TV and film aplenty, with recognisable faces such as Michael Parkinson, Nicole Kidman and Sienna Miller. But these are celebrity faces we’re used to seeing and the paintings feel as glamorous as photographs you would see in Vogue magazine of Hollywood A-listers. The room filled with portraits of famous people feels remarkably shallow and doesn’t offer anything that photography hasn’t already given us. The one exception is of model Erin O’Connor taken from the side and slightly behind – it suggests a comfort with the painter that sets it apart from the other adjacent works.

The main gallery of this two room exhibition is a little more spaced out giving each work some room to breathe. There is no question that the brave Pakistani school girl Malala Yousafzai deserves to be immortalised in a painting, yet it’s still a similar pose to newspaper images and none of her intensity in fighting for her beliefs comes across.

Lastly we have portraits of other artists, as self-referential as portraiture can get. Grayson Perry is shown as his alter ego Claire within a very feminine bedroom. His alter ego is always seen in public and it would have been much more insightful to show Grayson Perry ‘the man’ sans make-up and outrageous costumes.

The one work that does hit the spot is the portrait of Damien Hirst. Perched high up as if sat atop a throne and in a chemical suit he uses for creating his formaldehyde filled vitrines, it’s a recognition of his achievements and augurs both respect and disdain – much like the man himself.

Only two portraits in this exhibition gave us the insight we were looking for, while the rest didn’t seem to add anything we couldn’t already glean from photographs. We mustn’t forget that ‘celebrity portraits’ is where portraiture began, with commissions from wealthy patrons, but the genre has moved on and this feels too much like a throwback to those times.

There’s no doubting that Jonathan Yeo is an accomplished and talented painter and that this exhibition will attract people in droves, yet it left us wanting much more of an insight into his subjects than we received. 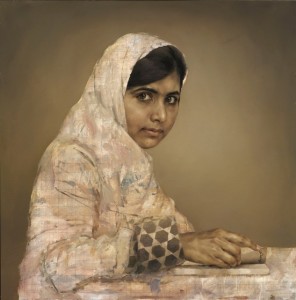 Jonathan Yeo Portraits is on at National Portrait Gallery until 5 January 2014. Admission is free.