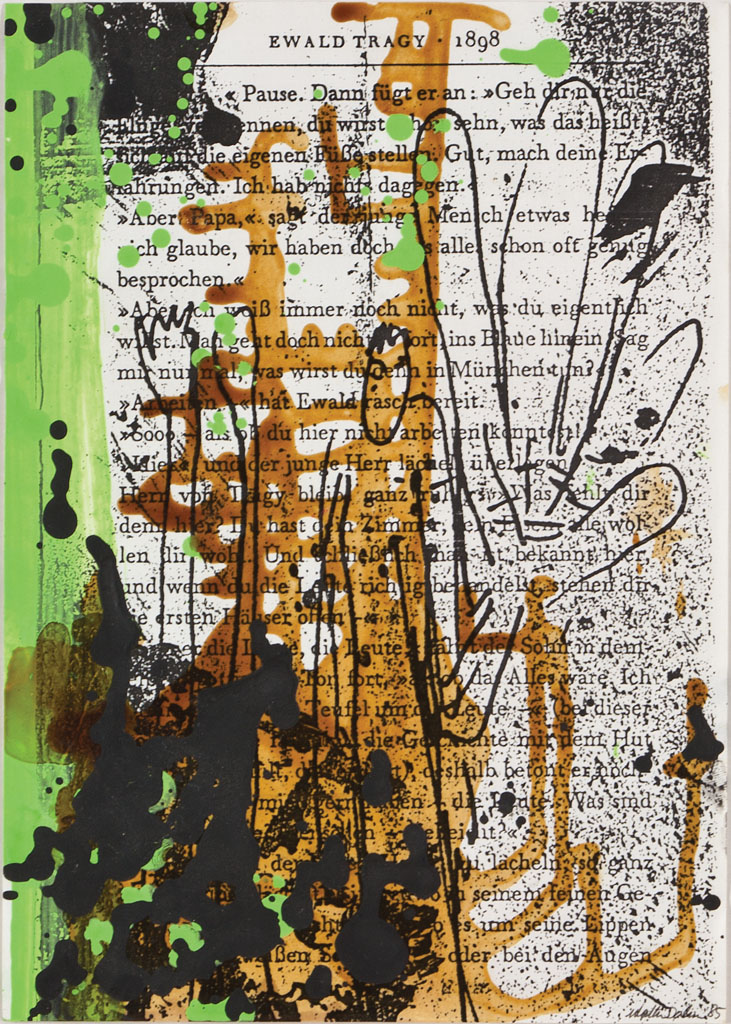 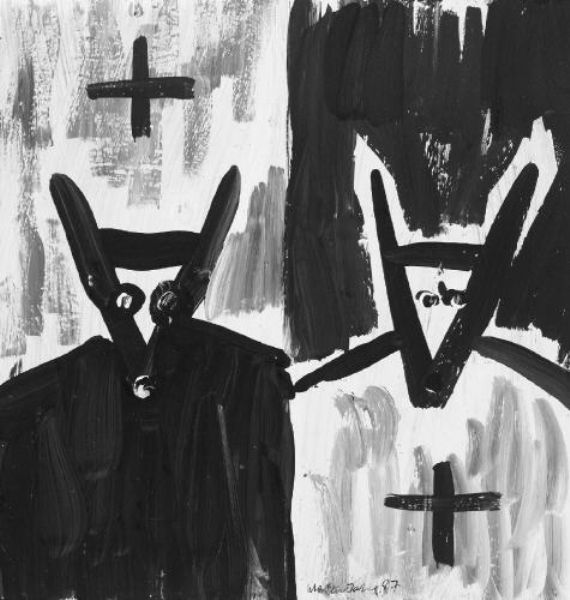 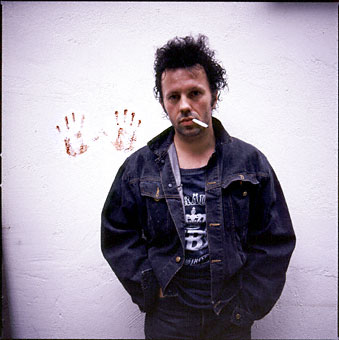 Artists Walter Dahn and Richard Prince first met in 1990 during Dahn’s exhibition at Gladstone Gallery in New York. Prince detected a kindred spirit in the German-born Dahn. Here was another artist exploring the underside of American culture, albeit from a European perspective. A shared interest in “outsider art” and fascination with New Wave and Punk music culture solidified their friendship and ongoing rapport. It is from this perspective and through the lens of personal history that Richard Prince has curated the exhibition 4th Time Around/ (My Back Pages), the first New York exhibition in two decades devoted to the work of Walter Dahn.

4th Time Around/ (My Back Pages) will present paintings, “anti-silkscreens,” and rare bronze sculptures, evidencing the full sweep of Walter Dahn’s practice since 1981. The exhibition takes its name from two songs by Bob Dylan, a favorite of both Prince and Dahn. “4th Time Around” is a song about a couple having an argument and later reconciling, while “My Back Pages” is Dylan’s poignant look back upon his own early, idealistic protest-song years. Together these titles suggest not only a dialogue between two artists but an unending internal conversation within Dahn, an artist constantly cycling and recycling through phases – his own and those of the popular culture at large — in a practice that forever defies stasis.

About The Artist
In 1971, Walter Dahn became a student of Joseph Beuys at the Kunstakademie Düsseldorf, where he also encountered such fellow students as Blinky Palermo, Jorg Immendorf, Imi Knoebel, and Sigmar Polke. During this time Beuys’ “extended definition of art” — his interest in locating creativity outside of formal art practice, his belief that anyone could be an artist, and his notion that art should eschew ideology – ignited Dahn’s artistic development. In the late 1970s and early 1980s, Dahn was associated with the Cologne-based Jungen Wilde (Wild Youth) painters of the Mülheimer Freiheit. This collective avidly challenged the prevailing Minimalist and Conceptual art, and its collaborative practice, intensive engagement with music, and raucous group exhibitions are widely recalled as improvisational, experimental, and highly charged: everything seemed to be made quickly and without premeditated plans or structures. “We were this group of painters, it was like a band. We went to every concert we could see,” Dahn has said. “It was a kind of mixture of an insane asylum, kindergarten, and art school.”

The impact of this period is revealed vividly in Dahn’s large paintings of the early 1980s, including such works on view at Venus as “The Momento m.” (1983) and “Untitled”(1981). For the first half of the decade, the artist was engaged in “sampling,” paralleling a phenomenon that was emerging in the contemporary music scene. Richard Prince has observed that Dahn’s work “went through an incredible number of styles of painting very quickly,” tearing through techniques, moods, and approaches to material and application in his work, even while adhering to figuration and a consistent engagement with popular music, as well as a consistent interest in mixing imagery drawn from disparate sources. In 4th Time Around/ (My Back Pages), the energy of such avid experimentation is on view in an array of paintings, from the gently poetic “3 Sonnen” to the large-scale canvas “Ausfegen.” (1986).

During the late 1980s, Dahn began applying his experimental approach to printmaking. Rejecting the prevailing model for silkscreens. Whereas the majority of artists produced multiples in which differences between strikes were subtle and uniformity was a value, Dahn began making “anti-silkscreens.” Creating and manipulating his image, he would create a single unique edition and then discard the screen. With such works as “Walter,” (1985), the layered, rough, and beautiful results of his innovative printing are revealed in the exhibition at Venus.

Eschewing formalism, Dahn’s work favored experimentation and unexpected combinations of seemingly random imagery such as graffiti from Oceania; album cover art recycled with appropriated images drawn from popular culture; snapshots of friends juxtaposed with landscapes and architecture. Through such tactics Dahn suggests there is no distinction between high and low culture: “You can transform the low, the most shitty and obvious things, into high quality art, recycle them into an art context where they take on different meanings…That’s my strategy, working with these kinds of mass or working class icons. I show similarities and differences at the same time. After a while I really get absorbed in this kind of psychology, everything becomes meaningful and meaningless at the same time.”

Since the 1990s, Dahn has circled back continuously through his different areas of interest, revisiting themes and techniques. After having been involved in various bands from the early 80s, for example, in 1994 he painted the titles of his favorite songs onto canvases, and in 1997 made drawings that referenced an album cover by the band Palace. Such approaches continue now in Dahn’s practice: “Now it seems like a way to move forward is to look back, sometimes to my teens and twenties. I work with memory,” he once commented in an interview by Richard Prince. Recent works on view at Venus – the unique edition piece “Anne Frank wehrt sich” (2005) and the painting “Bill Callahan” (2004) – find the artist revisiting and masterfully reinventing, calling to mind Dylan’s famous lyric, “Ahh, but I was so much older then/I’m younger than that now.”

VENUS OVER MANHATTAN gallery is located at 980 Madison Avenue, between 76th and 77th streets, on the third floor and is open to the public Tuesday through Saturday from 10AM – 6PM.